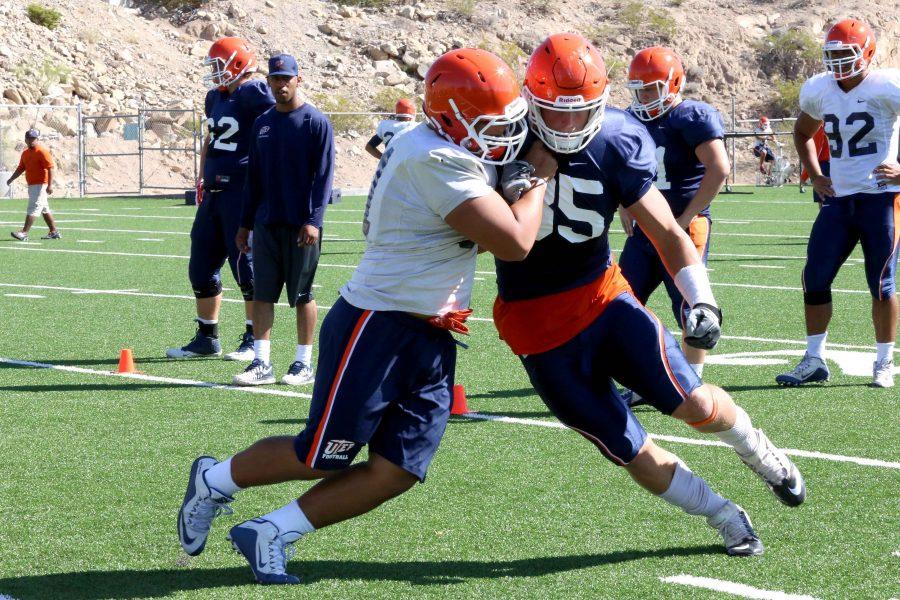 UTEP football squad squad wrapped up their final week of scrimmage and the team will prepare for NMSU on Sept. 3.

After spending 12 days at Camp Ruidoso and another week back home, often running practice twice a day, head coach Sean Kugler is finally ready to put a lot of his players’ minds at ease.

“We’ve kind of compiled everything from camp, we’re going to visit as a staff on Monday and kind of set our depth chart for New Mexico State and start our preparation work,” Kugler said.

There were position battles during camp, but none that would be worthy of making the bottom line on ESPN this time of year.

Last year’s starting quarterback Mack Leftwich is out for the season following shoulder surgery. On the roster currently are junior transfer from Fresno State Zach Greenlee, two sophomores Ryan Metz and Kavika Johnson and freshman Mark Torrez. Metz and Johnson both took turns starting last year in Leftwich’s absence and even saw the field together at times thanks to Johnson’s versatility.

It is that versatility that will more than likely keep Johnson listed as the third quarterback on the depth chart. In new offensive coordinator Brent Pease’s offense, versatility is key and despite being listed third, Johnson will touch the ball numerous times each game as a receiver and running back.

From day one at Camp Ruidoso, Greenlee has not only carried himself like the team’s starting quarterback, but he has made the throws and shown the intelligence that a starting quarterback needs. Unfortunately for Metz, he will once again be relegated to number two on the depth chart. However, this does not mean that he will only see the field in the case of an injury to Greenlee.

“We’ve got three talented quarterbacks that are athletic, and two of them next to me on the sidelines wouldn’t make sense,” said Kugler. “You’ll maybe see two quarterbacks in the game several different times during the year.”

Another unexpected battle that came up during camp was the competition to back-up UTEP’s all-world running back Aaron Jones. Initially slated to be Treyvon Hughes, who ended camp as the only significant injury and will miss all of 2016 with a knee injury. The next option on the depth chart was fellow sophomore TK Powell, who will be redshirting this season.

In the absence of a clear backup for Jones, numerous freshmen running backs have stepped up. The clear winner of the second spot on the depth chart appears to be Kennedale High School’s Quadraiz Wadley. As Jones sat out the final scrimmage at the Sun Bowl on Saturday, Aug. 20, Wadley ran with the first team and amassed 15 carries on the day.

The word all around camp from the time Wadley began to get more and more carries was that he looked very familiar to someone that UTEP fans are familiar with.

“Everybody’s like, if you want to see yourself as a freshman, look at him,” said Aaron Jones with a big smile when asked about Wadley.

Behind Wadley, Kugler says there will more than likely be a running by committee – although there may not be too many carries left over for the corps of freshman when Jones is done for the day.

On the defensive side, the position battles never really got off the ground as the depth chart in the preseason media guide appears to have stayed basically the same. The defense has switched from a 4-2-5 to a 3-4, allowing more senior linebackers to play that may not have had a chance under the previous coordinator.

Cooper Foster, Silas Firstley and Nick Usher all appear to have pinned down their positions in the linebacking corps, along with last year’s defensive star Alvin Jones. One to keep an eye on this season in the new scheme may just be sophomore defensive end Mike Sota, who had five tackles and a quarterback hurry in Saturday’s final scrimmage.

The team begins practice Tuesday in preparation for the rival New Mexico State Aggies on Sept. 3 at the Sun Bowl.

Jason Green may be reached at theprospector[email protected]