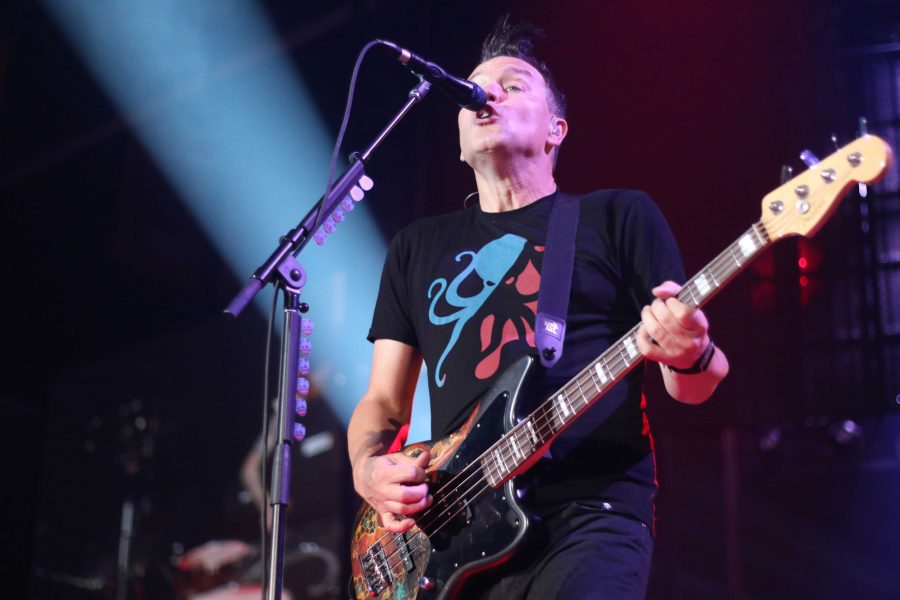 Blink-182 performs for the first time in El Paso at the Don Haskins Center on Tuesday, July 26.

Pop punk band, Blink-182, landed in the Sun City for the first time for their “California” tour on July 26 along with the All-American Rejects and A Day to Remember. The bands’ performances drew in thousands of new and old fans on what would have normally been an average Tuesday night.

The All-American Rejects performed a short set, playing hit songs like “Swing, Swing” and “Hope it Gives you Hell.” Lead singer Tyson Ritter wooed the crowd with his funny stories and charming demeanor, but his constant f-bomb dropping (which he did more than the other two bands combined) was offputting and seemed to go against most of their music. All in all, they put on a good show, especially with Ritter’s flowing vocals and the band’s vibrant personality.

American rock band, A Day to Remember, followed the Rejects’ set, managing to entertain the crowd with their intense vocals. Mosh pits formed on the floor as people danced and shoved each other around in a concert high only a few bands, like A Day to Remember, can create. While I’m not a big fan of their music, the performance was amusing and a good warmup to Blink-182’s performance.

Blink kicked off their share of the concert with their hit “Feeling This,” which was formerly sung by Tom Delonge, who was later replaced by Matt Skiba. It was jarring not hearing Delonge’s voice intertwine with Mark Hoppus,’ as they both sang about different perspectives on sex, and it was the only song I thought Skiba was not able to perform well.

As the band continued their show, performing songs such as the classic “What’s My Age Again?” and “Cynical” off their new album “California,” Skiba was able to better perform their songs, taking over for Delonge on songs such as “All the Small Things,” “Reckless Abandon” and “Dumpweed,” which were all previously sung solely by Delonge. In comparison to Delonge, Skiba’s voice sounds deeper and similar to Hoppus’. It was hard to tell them apart during some of their songs, but their chemistry worked well together.

Toward the end of their set, however, when Skiba sang “Carousel,” one of Blink’s first-ever popular songs, it was like nothing had changed and the original Blink-182 stood on the Don Haskins Center’s stage. Being one of my favorite songs of all time, I was impressed with his performance.

Hoppus put on a great performance as well, although at some points he seemed to be borderline too worn out to keep going. He had his signature humor, inappropriate comments and jumped up and down during many of Skiba’s performances (like he would for Delonge), but he struggled in doing so. It wasn’t too much of a problem, and his love for performing will probably have him continuing to do so even when the struggle is overwhelming.

Words will probably never perfectly describe Blink’s tattooed, hardcore drummer Travis Barker’s performance, which is phenomenal whether he’s in the studio or on stage. His insane drumming paired with his carefree attitude is a well-suited combination for his high-energy performance. At the end of the concert, the audience was treated to a performance by Barker’s son on the drums. At only 12 years old, it is evident he will follow his father’s talented footsteps.

I was skeptical going in, knowing it wouldn’t be the same without Delonge and Hoppus making jokes and talking about aliens, but most of the charm was still there, although it took a while to get there. Skiba is a new personality Blink fans need to get used to. He still needs some improvement–like not needing to read his lyrics off a screen and developing more of a stage personality, but his talent will surely keep Blink afloat as they continue their “California” tour.