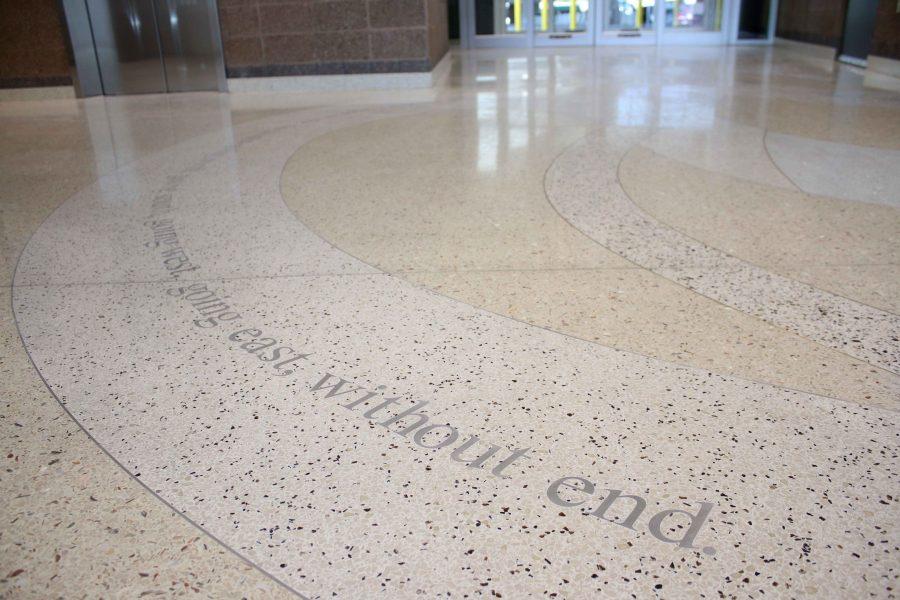 Mitsumasa Overstreet, art director for UTEP’s Academic Technologies Creative Studios Lab, designed the “The River/ El Rio: Both Sides, No Sides” (a continuation his “River Spirit” in 2013) at El Paso International Airport’s new facility that opened on June 7. The work of Overstreet features a terrazzo floor illustrated with a poem by UTEP creative writing assistant professor Sasha Pimentel and another by author Bobby Byrd.

Both poems were written in Spanish and English, Overstreet then designed the way in which the work of Pimentel and Byrd would intertwine, making reference to the Rio Grande River and the uniqueness of El Paso and Ciudad Juárez.

“Our poems make a river and we wanted that river to be a point of connection, a point of crossing, a point of intersection, rather than a division,” Pimentel said. “Our students, more than anyone, know what it means to cross spaces. They know that this region is rich in culture and in language.”

Pimentel said that being part of the artwork done at the airport is an honor and that UTEP students and staff are prepared to create any artwork in El Paso.

“I’m ridiculously humbled,” Pimentel said. “I owe everything to Mitsu Overstreet for bringing Bobby and me in as the poets. I think that our students and staff should be at the airport and all over the city because they are the ones who really know about this issue of ‘both sides/no sides.’”

Overstreet said that El Paso has many negative connotations that might confuse outsiders about what is the reality of the city. In 2013, he created “River Spirit,” which is the river-shaped design of the floor around the baggage claim area, which includes a message to people coming to El Paso to see the beauty the city has to offer.

Overstreet was able to recollect hundreds of quotes from people who expressed their love for the city. The quotes were then put on disks that were engraved into the floor near the river he designed.

“The baggage claim was more about finding a type of welcoming for people, to start off their adventure in El Paso at the airport. So when they leave the airport, they have a sense about the things that people like about El Paso,” Overstreet said. “It was about making people leaving the airport with positive ideas about our city and not with negative ones.”

Overstreet said the river that divides the United States and Mexico has a different meaning to him, it means being free in a region with different cultures and languages. For Overstreet, the river is more than a border between two nations.

“In actuality, the river is the reason why there is so much life here,” Overstreet said. “The river is more like a thing that the unifies us, not something that divides us. It is what brings us together. The river part of the installation is about being free and experiencing the region without having to deal with the bureaucracy of each nation.”