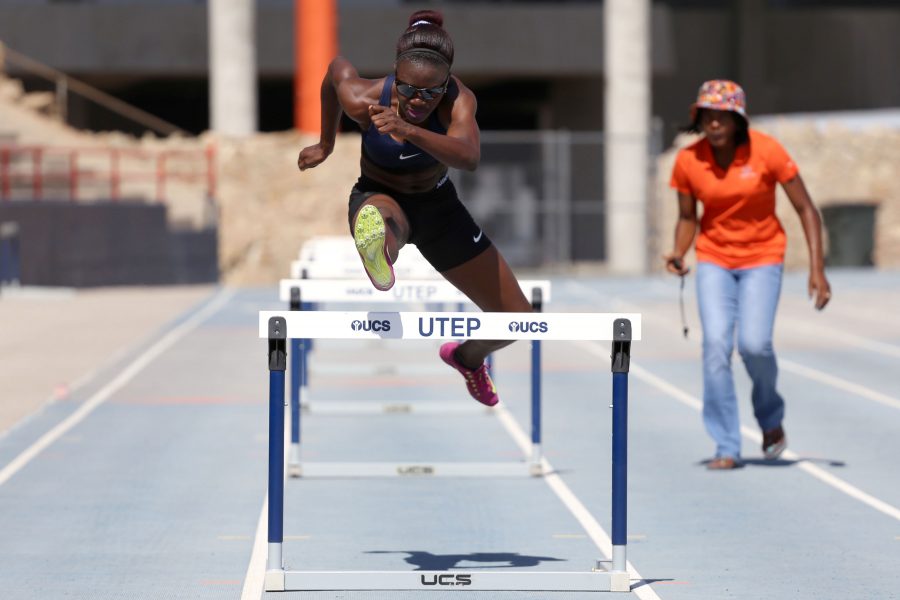 She stares at the runway ahead of her, which seems so unfamiliar to sophomore hurdles standout Tobi Amusan. It is the same track that she practices on, with the same coach helping her push hard. However, not one other teammate sits besides Amusan during her post-season races. They have either all gone home for the summer, are taking summer classes or are just taking a break from the track.

Despite the fact she ended her Conference USA season with a second-place finish at the NCAA Tournament, Amusan is not finished yet. She will travel to the IAAF World Under 20 Championships, which will be held in Bydgoszcz, Poland, on July 19-24, followed by the Olympics, where she will represent her home country of Nigeria, and travel to Rio de Janeiro, Brazil, in late August.

“I want to go a little bit more faster because I feel my body is in a good shape to run more faster,” Amusan said. “Racing against some of the top athletes in the U.S. is going to make me run fast. Going into the championship, knowing I got the fastest time in the hurdles, it’s going to propel me to run faster. Girls are going to know me as the fast girl from Nigeria, so that will push me harder too.”

Despite her excitement, the thoughts of her being alone on the Kidd Field track at UTEP still linger in Amusan’s head.

“It’s really hard training alone—there’s no one to push me, but I push myself,” Amusan said. “I’m just trying so hard, but I think that is the way I think I can run. I feel I’m training alone and going to the competition alone, so I will block everyone out and do myself. There’s no one to tell me, ‘oh, you got this girl.’ I’m just here. Coach is the one saying, ‘you can do it.’”

Her secret to combining mental toughness with the physical aspect the sport requires is simply consistency.

“I’m not doing anything different,” she said. “It’s more of the rest. Like my country used to say: the nine-minute training is not going to make you break the world record. It’s what you’ve been doing and the consistencies of the program and your diet, but other than that, there is not much different. The only difference is both of these competitions are going to be entirely different from college races.”

Her coach, Lacena Golding-Clarke, and Amusan have both wanted the track standout to reach both tournaments, and Amusan is especially excited about the opportunity to represent her country on one of the grandest stages.

“It’s a great privilege given to me by God because I never dreamt of this,” Amusan said. “It’s one of the greatest feelings to represent my country because it’s rare for someone to make it to the Olympics, and your country gives you the opportunity to be there.”

Amusan, who clocked her best time this year in the 100-meter hurdles at 12.83, is looking to set a new personal record for herself. That is only one of the many different accomplishments Amusan is striving for during this post-season action.

“The Olympics—I’m not saying I want a medal necessarily, but I want to go there, do my best, get a new personal record and breaking the African record,” Amusan said. “I know I can do it, but it’s one step at a time and anything can happen. But I can’t worry about going to the medals table or running faster—anything that happens, glory be to God.”

Currently, the Nigerian hurdler is ranked 21st in the world on the senior list and rests among the top Nigerian times for the country’s best in the hurdles. However, being in the top 25 in the world has little affect on Amusan.

“I’m not bothered by world ranking,” Amusan said. “Like NCAA Finals, I went into the finals as the last qualifier and I got second, so ranking is nothing.”

The once-little girl from Nigeria never dreamed she could go this high in such little time.

“I used to just go to the track, just like a normal girl, and run,” Amusan said. “After going for a major championship and my nationality, I felt like I really need to take this stuff seriously. I thought of training for the Olympics someday, but I was thinking way ahead, like 2020 or past. I wouldn’t have thought I would have made it this fast.”

Amusan left for Poland from El Paso with her coaches on July 16. She will then fly with the Nigerian team to Brazil in late August. However, it is unsure whether she has a spot on the team just yet.