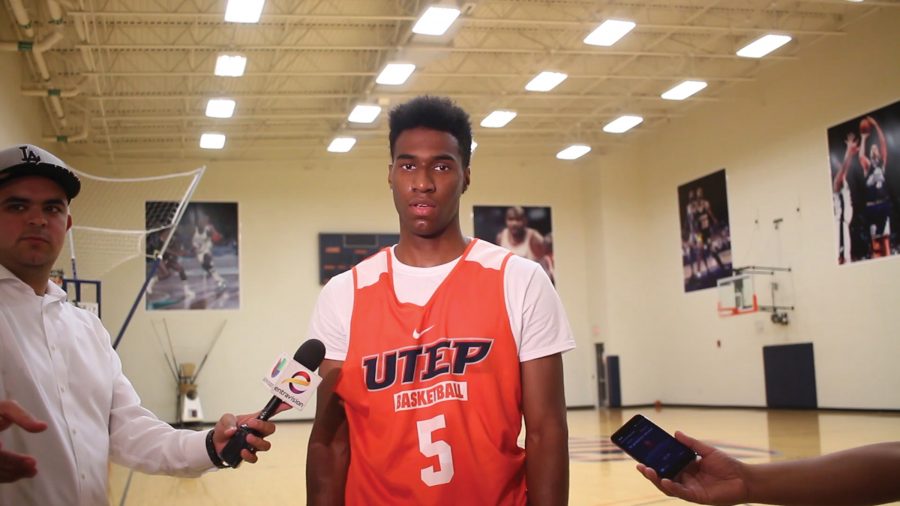 Freshman guard Chris Barnes will be a new addition to the men’s basketball team roster.

The UTEP men’s basketball team lost forward Earvin Morris to graduation and leading scorer Lee Moore, who decided to forego his senior year to pursue a professional career. Forward Josh McSwiggan also left the team before clocking any minutes for the Miners.

Now all eyes are watching every move the Miners make this summer because they might prove to be crucial.

Chris Barnes, the new 6-foot-3, 180-pound shooting guard, is excited about what it means to be a Miner and hoping to contribute in any way possible.

“It really got me to come here because they have a lot of fans—almost every game—whether good game or bad game,” Barnes said.

The Long Beach, Calif., native from Compton High School has a wide range of abilities to score. Barnes averaged 51 percent from the field, a total 192 points scored in the 16 games played during his senior year and averaged 3.8 assists, 5.6 rebounds and 3.1 steals per game. Barnes helped his team to a 14-2 record.

In his junior year of high school, Barnes had offers from school such as Weber State, Portland State and Fresno State, Santa Barbara and California State-Northridge. He ultimately decided on El Paso relying on advice from a pretty impressive source.

Both Barnes and NBA standout from the Toronto Raptors, DeMar DeRozan, are products of Compton High School. Before he left California, Barnes talked with DeRozan, who was coached by UTEP head coach Tim Floyd in college.

“(DeRozan told me) Floyd is a good coach,” Barnes said. “He will get you where you need to be.”

Barnes is very familiar with UTEP’s basketball legacy. Although he has not made an official visit, he is already taking summer classes and getting to know the El Paso community.

Barnes already has a state title under his belt. As a sophomore at Compton High, along with gaining Compton basketball SoCal Prep Legends boys’ Athlete of the Week, the aggressive athlete helped lead his team back from a 33-17 deficit during the championship game, scoring 13 of his 17 points in the second half, which included two 3s in the fourth quarter. That shows an impressive demeanor as a sophomore in such a huge game as the state championship.

He has really enjoyed the summer workouts and playing pick-up games with the team every day.

“The chemistry is real good right now,” Barnes said. “It’s all jokes inside the locker room and everything, so I’m feeling the good vibes right now.”

The explosive guard, who is continuing to grow as an athlete, can separate from his defender with unique finesse, allowing him to explode to the rim or pull up for the jump shot.

Barnes is ranked 90th among those in his position, 131st in regional and 84th in the state of California.

“I just need to work and make sure my 3-point shot is right, that and my conditioning for the college level.” Barnes said. “If I get my conditioning where I need it to be, I will be an amazing player to watch. The UTEP fans will see they have an athletic guard that gets up the court.”

Barnes is not in a hurry to jump on to the court, and hopes to contribute in any position the team may need.

“It’s just all what coach Floyd wants me to do—just whatever he tells me to do, I’m a go out there and do it,” Barnes said.

Shericka Lawrence may be reached at [email protected]