The rationale of Trump supporters 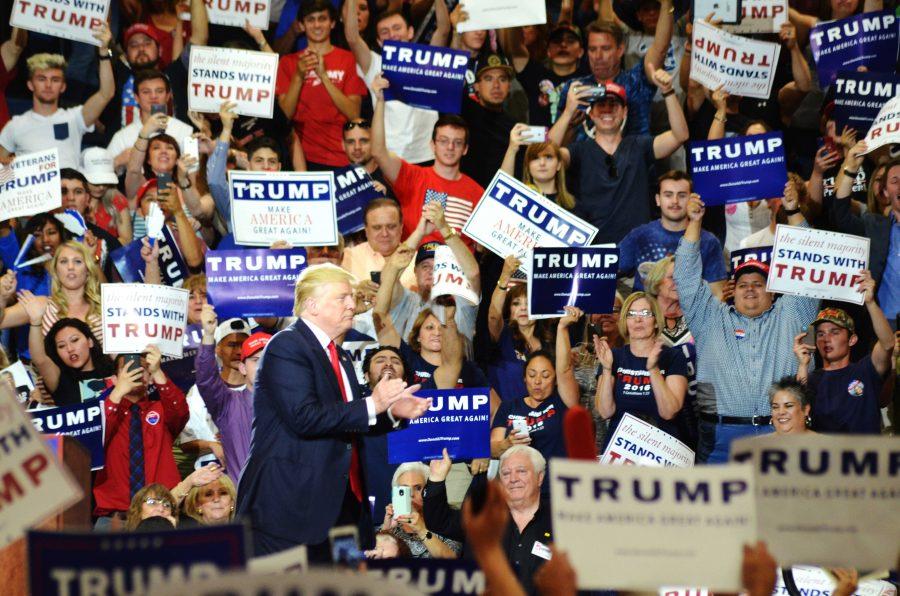 President Donald Trump holds a rally in Albuquerque, New Mexico on Tue. May 24.

These assumptions are easy. The average Trump supporter might meet most of that criteria. But upon deeper examination Trump supporters have a wide range of nuanced opinions. I discovered this when I covered the “Make America Great Again” rally in Albuquerque, New Mexico on Wednesday, May 25th, 2016.

Before I go on, I would like to preface by saying that I agree with little of what Trump supporters say nor do I condone any of the racist, misogynistic, and homophobic rhetoric that some spout. Also, my takeaways from the Trump supporters are still, in many ways, generalizations. I spoke to roughly 15 Trump supporters, a nice sample size, but nowhere near the millions of Americans that have backed the Donald.

Without further ado, here is my understanding of Trump supporters rational.

Every election cycle politicians, Democrats, and Republicans alike try to sell fear: fear of economic instability, fear of global terrorism,  fear of widespread immigration. Some of these talking points are rooted in reality, some are completely fabricated. Still, every politician is trying to sell it, whether it be in a pint sized glass or a gallon jug.

In Trump’s case, fear is selling well. There is not a single point he misses. From fixing trade issues with the Chinese to making our military the robust power it once was, Trump covers all bases. Just think about his slogan “Make America Great Again!”

It’s ambitious, audacious, and thought-provoking, albeit unoriginal, but I’ll touch on that later. With his slogan alone he makes the basis of his argument, without even opening his mouth. During his hour-long speech in Albuquerque, he kept saying “we don’t have a country” or “we won’t have a country” if A, B, C happens.

“If Hilary gets into the White House, we will not have a country.”

“If we are not vigilant with Syrian refugees, we will not have a country.”

It was sporadic, but he kept referring back to it. As incoherent and poorly structured as his speech was, as with many of his speeches, Trump gives his core constituents something Cruz, Rubio, and Kasich could not – salvation. He propagates himself as a savior, a hero, a martyr for a cause.

If Trump falls to Hillary in the presidential election, he can always fall back on the martyrdom shtick. If he fails it’s because the system is rigged, if he wins he’s all the mightier.

“The system is against me and it has been since the beginning,” Trump said. “But I love it because I’m going to beat the system. Bernie can’t.”

So there is the setup; he frames the U.S. as systemically problematic, then sells himself as the man to fix it. But the reason why Trump, “Trumps”, everyone else (pun intended) is his use of language. It’s simple, to the point, and reductive. Nothing is complex.

Coupled with a lack of political correctness and nonlinear oration, the foundation of the most polarizing presidential campaign in U.S. history is spawned. He says things that no other politician says, often times coming off as racist by many of his detractors. More importantly, because it’s off the cuff and inappropriate, it seems genuine.

Yes, genuine, a trait that is lacking in today’s politicians. And in Trump’s newly molded Republican base, genuineness is more important than a magnanimous personality or practical policy.

Hillary has experience and qualifications out the wazoo, but she is maligned because she does not come off as honest. She seems like a façade, a political gimmick, an obvious front- in part because she is a woman.

Sanders, on the other hand, is very similar, he seems anti-establishment, but he thrives because of his simplistic logic.

College debt is through the roof…let’s lower tuition.

With Trump nothing is esoteric. Yes, he proposes some things, like his plan to get Mexico to pay for a wall, but his policy points are beside the point. It’s all about being genuine and here is where I generalize.

When I talked to the Trump supporters in Albuquerque and asked them why Trump was the man for them, they never brought up policy. It was about his political disaffection and brutally honest rhetoric.

A fair point can be made to say that anyone who supports Trump is moronic because they support a feeling, not a plan. But it’s not moronic to vote on a feeling, it’s a genuine action. Furthermore, it’s contradictory of people on the left to criticize people on the right who are seduced by Trump.

People who think that Sanders could get legislation passed on taxing stock market speculation or eradicate college tuition altogether, need to take a hard look at who’s in Congress and how government works.

It’s not to say that taxing stock market speculation is just as stupid as building a gargantuan wall (it’s sensible by comparison) but both proposals are far-reaching and politically impossible. It’s natural to gravitate towards someone that evokes a sense of trustworthiness.

This brings me back to the “Make America Great Again” slogan. Again, it’s ambitious, audacious, thought-provoking and most importantly tremendously unoriginal. Every four years politicians put together a slogan based on the concept of reestablishing America as the global power that it should be, as if it is not.

The phraseology of “Make America Great Again” has never been said, but the meaning is always the same. It’s about hope and restoration of ideologies from the past. And that is the fatal flaw of Trump supporters and in some ways of Sanders supporters.

Putting stock in a politician who seduces you with hope never works in your favor. The absence of strong, logical, and attainable policy ideas in Trump’s campaign is why he starts and finishes with propagating hope. You don’t have to let God take the wheel and steer when you have sturdy hands. Trump is shaky at the wheel.