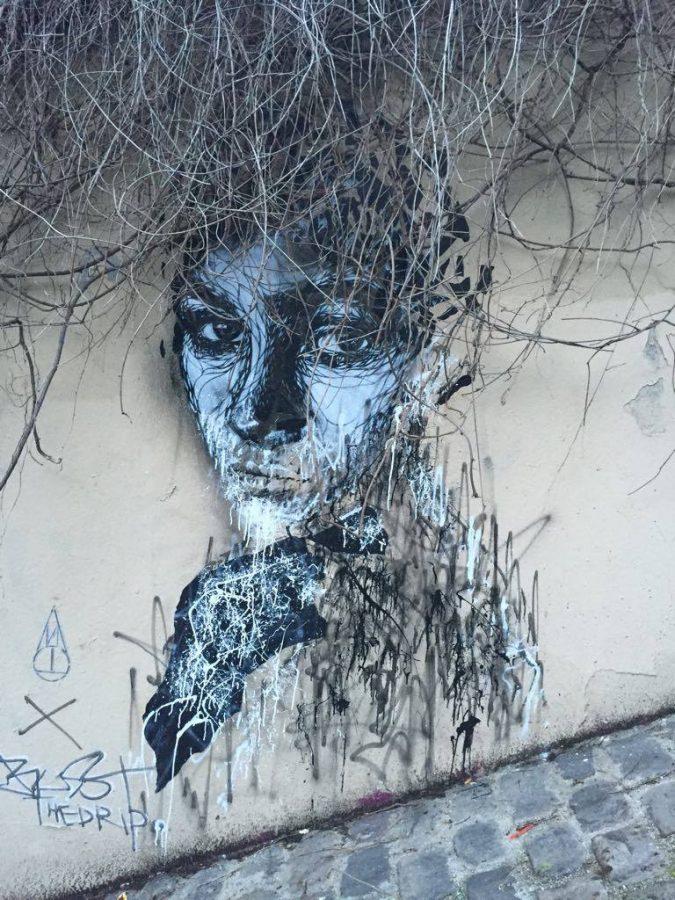 Street art in Paris is on the rise thanks to the inspiration of artists such as Banksy who have made defacing public property into a trend.

Editor’s Note: Eric Vasquez is a Prospector writer currenty studying abroad throughout Europe. This is the first entry of his travel blog.

Paris is well known for being the home for works of art that stand titanic in human history: Da Vinci’s “Mona Lisa,” Van Goh’s “Portrait of the Artist Himself” and Monet’s “Water Lily Pond.” But outside these picturesque museums, an entirely different art form has been taking place over the last decade that is demanding as much an audience as these historic museums.

Street artists such as Banksy have made the defacing of public property cool. So much so that a well-done piece of street art could not only be left alone on the building it is defacing, but honored, the owners brandishing it like a really cool scar. Paris is now rampant with street artists striving to let their art be known, from designs on stop signs to meticulous mosaics depicting the Hulk.

After a few walks around the city, you will begin to recognize the handiwork of certain artists. After a few marked stop signs or sparkling mosaics you recognize them to be by the same hand, which pulls this art form away from peers in a distinct way: the creators of these pieces remain completely unknown.

Sure, you can recognize the mosaics or fat cat on the side of the wall, but their creation leaves us nothing about their creator, no farther than the fact that they were at that location at some point in the past. Compare this to the ubiquitous names we associate with the great paintings or sculptures. After all, did I really need to say the “Mona Lisa” belonged to Da Vinci?

Photographing a street artist’s work is a task that can be undertaken at any point in the day. Finding the artist himself, however, proved to be more difficult. When walking the streets of Paris at the time these artists work (and normal people sleep), I found one artist in the process of spray painting a fat cat on a ledge. Approaching him and asking him for an interview, he quickly declined and continued his work. After asking him for a picture, he finished his drawing and jogged away.

Why bother staying up at night and risk a police chase, or at least a ticket, to leave your design if your name would not be attached to it? Why wear a monkey mask as Banksy does and continue to leave pieces all over the city to gain nothing from it, all the while T-shirt shops mass produce your images? Paris is plagued with small pieces of art, all of them orphaned by their creators, who are no doubt as in want of money as the rest of us, every one of them living in a city where art is commoditized by tickets and gold frames. The goal for street artists, however, seems to have a different motive.

One of the more stranger pieces of street art seen in Paris is not a curling alligator on the side of a building or mosaic of the Hulk, it is a simple white sticker pasted on the side of fuse boxes and on bathroom stall doors. In black lettering stands a simple statement, “J’existe,” the French translation for “I exist.”

For street artists to leave a design of their own creation is a statement to those who see it that they exist. That despite the observer’s ignorance to another life outside their own, there exists someone else, someone they don’t know, and the proof is in this design. The “J’existe” is the champion of street art, the self-proclamation that someone made and placed that sticker there, and by doing so has affirmed their existence in this world even if their art never sees the inside of the Louvre. Street art, in a word, is taking back art from the tourism and capitalism and giving it back to the artists.

Eric Vasquez may be reached at [email protected]