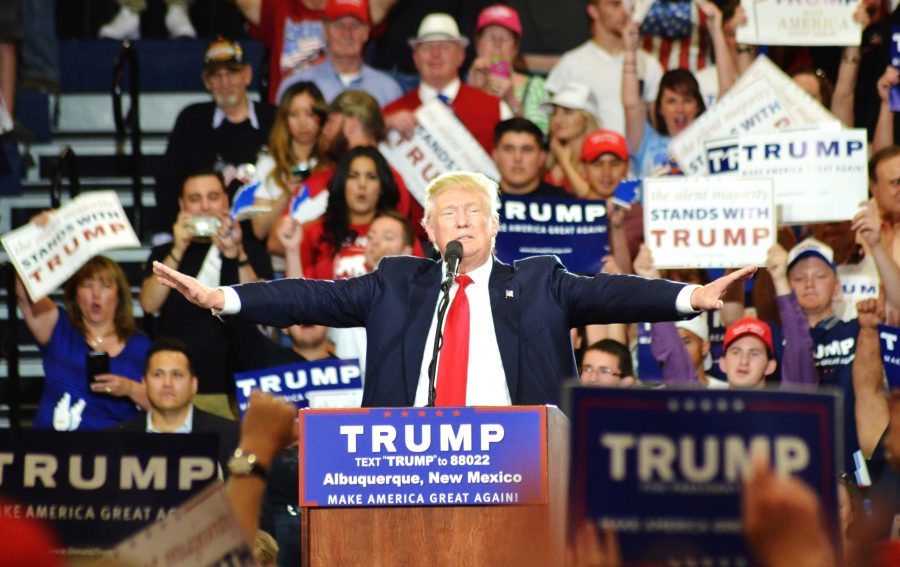 Albuquerque, NM—Donald Trump was the talk of the town going into his “Make America Great Again” rally at the Albuquerque Convention Center, but by the end of the night anti-Trump protestors, peaceful and violent alike, stole the show.

Before Trump hit the stage at approximately 7:16 p.m., his supporters were met with a strong opposition of roughly 200 protestors at the intersection of Tijeras Avenue and Second Street. Protestors had an array of signs with slogans ranging from “America needs to dump Trump” to “Trump can kiss my rump.”

Once the convention center doors opened, the chants of “Dump Trump” faded into the background, while the “We Want Trump” chants moved into the forefront. After an hour-long introduction, closed by Trump’s political advisor Stephen Miller, the make-shift rally room of roughly 2,000 people erupted.

Trump came out to the early 1990s anthem “Get Ready for this,” before the Republican nominee started by boasting about his poll numbers. What followed over the next hour was an off-the-cuff speech that ranged from Hillary Clinton jabs to proclamations of revitalizing the U.S. military.

One constant throughout Trump’s speech was the periodic ejections of protestors who had made it inside the convention center. Less than five minutes into his speech, protesters were being thrown out of the venue.

Before the start of the event, a convention-wide announcement was made to attendees to not verbally or physically engage with Trump protestors. Supporters were instructed and encouraged to point out anyone protesting during Trump’s speech.

As the rally concluded, more than 15 people were thrown out of the convention center. Trump seemed to be unfazed by the constant interruptions, instead the uncertainty of when and where the next protestor would come from matched the tenor of Trump’s speech–a jumbled one-hour rant.

One minute Trump was tackling the subject of immigration, then next minute he was defending the second amendment. Like a Jackson Pollock painting, Trump was everywhere, with no coherent order.

Every promise, platitude, and proclamation given by Trump was followed by ovations that became louder and louder. Trump covered his bases with every politically trendy topic at hand but always circled back to two main points: poor trade agreements with Mexico and China and the rigged political system.

The United States’ poor trade agreements were in his opinion fostered by “stupid” and “incompetent” leaders.

“Our trade deals are so bad,” Trump said. “They were done by incompetent people. We are going to turn that around and make great trade deals. China, which has been ripping us off…Mexico, we have a problem. The Mexican leaders are smarter, more cunning and sharper than our people that are not smart, sharp and cunning. We are being ripped off at the border.”

The rigged political system was met with the loudest ovation. Surprisingly enough, Trump cited Bernie Sanders as the biggest victim of the “rigged system.”

Trump claimed about 40 percent of Sanders supporters will vote for him, citing “the system is rigged against Bernie.” Followed by “we are in a rigged system folks and I am going to fix it.” Then topped off with “the system is against me and it has been since the beginning. But I love it because I’m going to beat the system. Bernie can’t.”

Trump concluded with his “Make America Great Again” slogan followed by a few “I love you New Mexico” to close the show.

But just as Trump was making his grand exit, things started to heat up outside. The large congregation of anti-Trump protestors, who were last seen across the street from the convention center, packed the steps outside of the entrance, and what followed 15 minutes after the conclusion of Trump’s speech was civil unrest at its finest.

Protesters light a trash can bin on fire filled with Trump t-shirts. Riot police come on to the scene and were met with considerable hostility. The protestors then started throwing rocks, water bottles and sections of the barricade back at the police.

Police start to pepper spray protestors and throw out what at the time seemed to be tear gas canisters, which was later confirmed by the APD to be smoke canisters, out into the crowd. Few protestors were deterred by the smoke and kept throwing things.

Police stop throwing smoke canisters out into the crowd and shift their priorities to fencing off the convention center, expanding to a larger perimeter.

Protestors show little to no let-up, openly mocking the police chanting “Fuck the Police” and “Fuck you Pigs,” while continuing to throw rocks and water bottles.

Things start to calm down, but the vast majority of protestors are still in the area.

Police completely close off Tijeras Avenue, pushing the barricade all the way out to the sidewalk. Few protesters leave.

Protestors start to disperse and leave the area completely.