Student expresses herself through live art 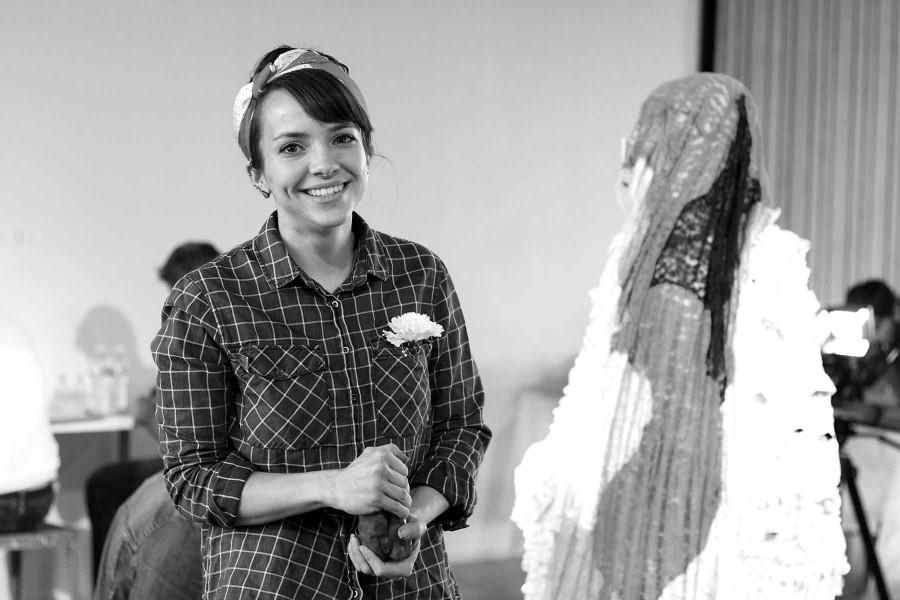 In the simplest of terms, art is most recognizable when put in a frame or encased in a compact disc.

Then there is performance art—something that cannot be framed or encased. It is broad in its meaning, often times hard to understand and visibly strange.

The work of Heather Mawson may be described that way. The senior studio art major just finished her second solo piece entitled “Old, New, Borrowed, Blue,” at the Glass Gallery, located in the Fox Fine Arts complex, on April 22.

The collaborative installation took place over four days, which had viewers take part in the project. In the middle of the Glass Gallery was a propped up wedding dress with a multi-colored long veil draped over the top.

Featured around the dress on the ground was a circle of clay rings with white pieces of paper attached to them.

The pieces of paper consisted of people’s thoughts on marriage, relationships, weddings and the idea of communion as a whole. More than 85 people throughout the three days wrote notes with brief messages or long thought-out opinions in the tiniest of fonts.

On the final day, Mawson transferred each brief note from the clay on to the dress. Mawson then put on the heavy dress and slowly paced around the Glass Gallery in a circular fashion, stomping on the clay rings with her bare feet. Mawson’s breaking of the clay rings represented her questioning the institution of marriage, while walking around in the heavy dress was a metaphor for the heavy pressures that comes with being a bride in Western culture.

Absent of context, Mawson going in circles, breaking clay with her feet may seem ambiguous, hard to understand and weird, but that is Mawson’s work. “I’m not the old-school type of person that thinks you have to be in your studio all the time,” Mawson said.

“Art can be anything and art is changing right now­—where it can be situations and relational settings.” Starting out as a graphic design major at the beginning of her college career, today Mawson’s work consists of installations that involve herself, objects and the viewers.

Her projects are often interactive and short lived. “My work isn’t necessarily only objects,” Mawson said. “I work with the community putting in installations. A lot are evolving, some are very ephemeral. So I don’t have a lot of actual things (to show off my work), except for photos or videos.” Describing her work as “broad,” the bulk of Mawson’s work is focused on social and cultural norms within Western society, specifically within her perspective and the female perspective.

The projects are not meant to persuade or dissuade viewers, rather the installations are about asking questions. “I always want to be questioning because I feel like through my art I’m able to work through issues that I’m questioning myself, and whether people do or not,” Mawson said. “Just by people looking at my art they might question things.” Although Mawson’s intent is to question things through her work, one thing that is unquestionable is her talent. Three weeks ago, Mawson made history by becoming the first UTEP student to be selected as a recipient of the 2016 University of Texas System Regents’ Outstanding Student Awards in Arts and Humanities.

Mawson was selected from a pool of students within the UT school system, ultimately winning the 3-D category. With the honor, the senior art major will have $1,500 awarded in her name to the sculpture division within the art department. Mawson was surprised to hear that she received the award, due to her non-traditional work, but her peers and professors alike in the art department did not have the same astonishment.

“I’m not surprised that she won because of the quality of her work,” said UTEP Art Department Chair Vincent Burke.

“Even if it’s not in the traditional format, it’s still outstanding…You never know who those jurors are in Austin, but I think it’s safe to say they saw the quality in her work.” In the lead up to being selected for the award, Mawson had to include 10 submissions of her work and an essay about her work and her views on art. According to Mawson, the process of putting everything together took two weeks, but the opportunity to submit work was much more rigorous.

For starters, Mawson had to be nominated by a committee made up of art faculty and student representatives that were not from the sculpture division within the art department, along with an outside UTEP administrator. Once Mawson secured the nomination from UTEP, she, along with four other Miners, were put into a smaller more refined pool of college artists within the UT System.

The panel that selected Mawson consisted of professional artists, museum directors and curators who were not associated with the UT System. In short, it was an intensive selection process that took more than a few easy submissions and a page-long essay. “Those experts picked her as one of the two winners,” Burke said. “For her to make it that far and to be selected by a group of professionals in the arts is a tremendous honor for Heather. And I think it speaks to the quality of her work.”

Set to graduate in May, Mawson’s work has made her one of the more sought-after undergrads in the country, according to Burke. After graduation, Mawson will attend Cranbrook Academy of Art in Bloomfield Hills, Michigan.

Cranbrook was rated as the sixth-best fine arts graduate school in the United States by U.S. News and World Report’s ranking and reviews. Mawson was also accepted into Virginia Commonwealth University, the second-ranked school by the same publication. “She was accepted to some of the top graduate schools in the country,” Burke said. “She received interviews across the U.S. and was highly sought after by various graduate programs.

She ended up picking arguably one of the best programs in the world in Michigan.” Modest by her own admission and described as humble by Burke.

“She’s so amazing that it’s hard to put into words,” Burke said. “Heather is such a superlative student, artist and thinker. You just kind of know that this is a special person. Working with her is a gift. I feel that I have learned as much from her as she’s learned from me.

Mawson will be honored on May 12 at the UT System Board of Regents’ meeting in Austin, and soon after will move onto life in Michigan, but no matter where life takes her next, it’s about doing what makes her happy.

“My goals in my life are going to be different from other people’s goals,” Mawson said. “The great thing about art is we don’t have standards. You can paint flowers for the rest of your life if you are cool with that. It’s about what’s best for you and I feel like that’s how we should all live our lives.”