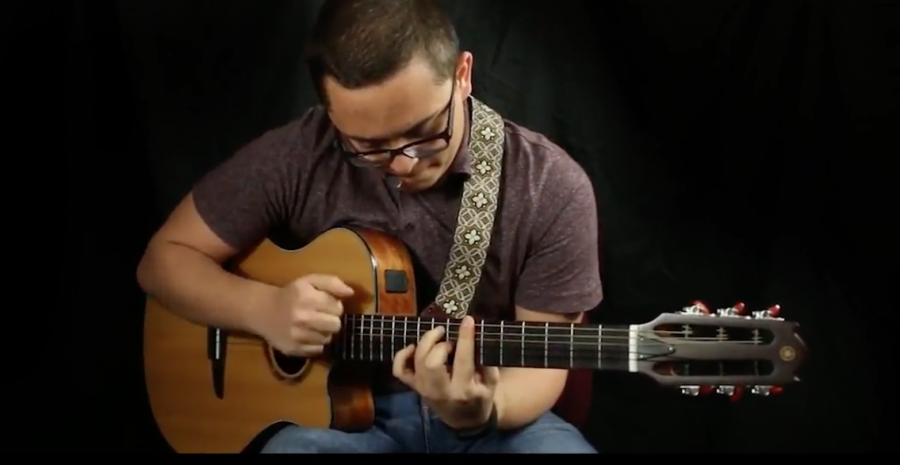 Arturo Gonzalez improvises with the guitar.

If it weren’t for family and curiosity, Arturo Gonzalez perhaps wouldn’t have picked up the guitar and learned a unique method of playing, leading him to win the UTEP Picks Talent contest twice.

Gonzalez, a senior microbiology major, has been playing guitar for more than 10 years now, showcasing his impressive guitar skills at different talent shows and events, turning his performance into somewhat of a comedic show by using footage of himself to battle, well, himself, but that wasn’t always the case.

“My cousin had given me an old, classic guitar for my 11th birthday,” Gonzalez said. “At first, it was an unexpected gift. I wasn’t that big on music, much less instruments. I had the guitar under my bed for months—it had gathered dust. I took it out one day and just started messing around with it. That’s when I started to feel that I wanted to get into this. I specifically wanted to learn to play Beatles songs.”

Gonzalez’s father was the one who exposed him to The Beatles, Eric Clapton, Led Zeppelin and other classic rock icons, so he naturally asked him for help. To his surprise, his father is a guitarist as well. “That’s the moment my dad became twice as awesome.

It was like a secret identity that my dad had,” Gonzalez said. “He took me under his wings after that.” With both his father’s and his middle school choir teacher’s help, Gonzalez learned basic chords and technique. He used sites like YouTube and Ultimate Guitar to look up popular songs and learn how to play them by looking up the tabs.

But it wasn’t until his sophomore year of high school that Gonzalez broke from the basics and branched out into learning classical Spanish guitar playing, which he taught himself. “Before that, I was in a musical rut, playing camp fire songs,” Gonzalez said.

He credits a class assignment for exposing him to the playing style he has since mastered. “We had an assignment, where we had to make a trailer for a movie using editing software,” Gonzalez said. “My teacher played ‘Atman’ by Rodrigo y Gabriela as accompanying music.

It was a huge wall of sound, but it was just two guitars, and I remember thinking ‘how is this even possible?’” Gonzalez went home and looked up the artists, which he said impressed him since they were just two guitarists.

He practiced traditional Spanish guitar playing as well as jazz-influenced guitar from that day on, relentlessly studying the technique by learning to do Flamenco triplets, using the guitar as percussion and playing strings rapidly.

Although his practice took extreme discipline and there were times when he wanted to give up, Gonzalez would convince himself that he could master the guitar, but it all was under the radar from most of the people in his life. “My friends and family would ask me to hang out, but I always told them that I had homework or something so that I could practice for hours,” Gonzalez said.

It wasn’t until he performed at his first talent show in his junior year of high school where he exposed all of his hard work. “I surprised a lot of people,” Gonzalez said. “A lot of my friends asked me when I learned to play like that.” Gonzalez won the talent show.

That’s when he said he started to perfect his playing skills. Gonzalez eventually also won both the 2014 and 2015 UTEP Picks Talent show.

Although his guitar skills are impressive alone, Gonzalez said he knew he needed to add an “element of surprise”, to his show in order to win. Again, Gonzalez turned to his father for help. “My dad mentioned ZZ Top because in some of their shows, they show themselves performing in the studio while they perform live,” Gonzalez said. “I thought that was interesting, so I tried it out.”

In his shows, Gonzalez accompanies himself through video, which plays on a screen behind him. Gonzalez then performs both duos and guitar duals, which Gonzalez said took him about 50 times to synchronize adequately on video.

He attempted to keep his title this year as well, but he wasn’t allowed to because no act can compete more than twice, a rule implemented because of Gonzalez. Instead, Gonzalez entertained the audience as an intermission act, resulting in an explosive round of applause.

When it comes to his career endeavors, Gonzalez said his main passion is going into the field of medicine. “I’ve always also had a deep passion for science,” Gonzalez said. “There is a lot of matters of luck in regards to music, you have to be in the right place at the right time.”

“I’m a huge science fan, but both continue to be my passion.” Gonzalez encourages musicians and artists alike to always have discipline when it comes to their art, to never give up and to constantly practice. “When the time comes, you’ll make a masterpiece,” Gonzalez said.