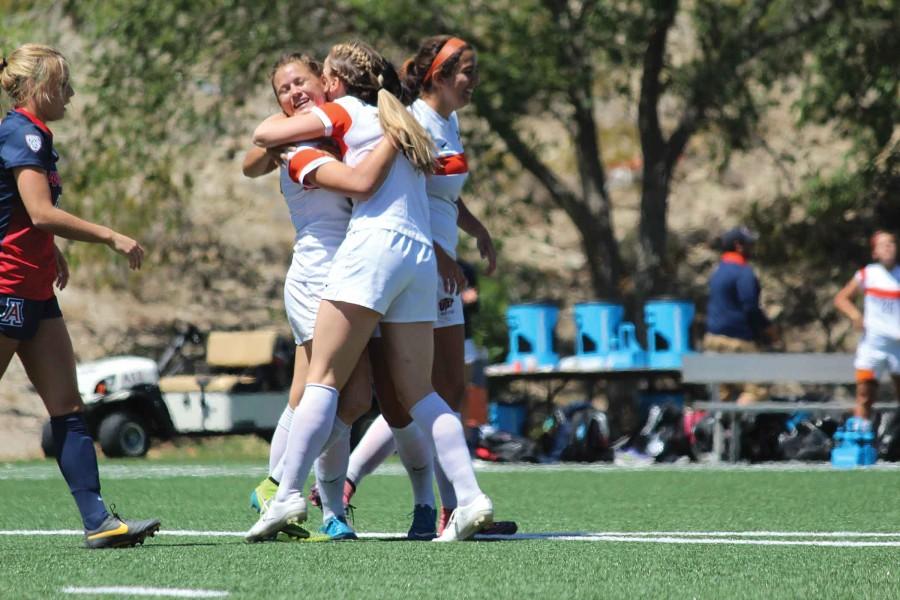 Bri Thomas scored the go-ahead goal against the Arizona Wildcats on Sunday, April 18.

The UTEP Miners’ spring exhibition games ended successfully over the weekend, making their presence felt against two PAC-12 teams and showcasing their strengths on the field.

The Miners (5-1 exhibition) had an impressive 2-0 win over Arizona State on Saturday, April 16. Goalkeeper Alyssa Palacios had significant stops in the win, and in the second half, UTEP had the Sun Devils back peddling, scoring two goals and stealing a 2-0 spring exhibition win over the visiting team.

On Sunday, April 17, the Miners controlled a valuable win over the University of Arizona, who was a previous sweet 16 team, at University Field, winning 2-0 in a competitive match.

“We did very good,” head coach Kevin Cross said. “We beat two PAC-12 teams, and Arizona made it to the sweet sixteen last year and was ranked 20th in the country, so this was a huge performance for us.”

In the second half, the Miners were the stronger aggressors. Junior midfielder/defender Bri Thomas took control on offense quickly, and at the 15-minute mark, she scored the first goal of the game to give the Miners a 1-0 lead.

With time ticking down the last 10-minute mark, the Wildcats again had a strong offense moving down the field, but again, the Miner’s strong defense prevailed as Palacios saved two goals. On the first save, Palacios made a diving catch to save a potential game-tying goal at the five-minute mark.

To cap the game, senior forward Angela Cutaia dribbled down the field, avoiding two Wildcat defenders, and scored another goal for the Miners with 2:20 remaining in the game.

The Miners had Arizona panicking for a goal with the final minutes remaining in the game, but the Miners’ defense held on and they pulled off a shutout victory 2-0 win over Arizona.

Although the game may not count in the record books, Cross believes that the exhibition season helps him scope out the ins-and-outs of his team.

“This is where it starts,” Cross said. “We showed that we can beat two PAC-12 teams, so there’s no reason we shouldn’t beat Conference-USA teams. This should only motivate us and help to train harder because we can do it. Some people might say one good performance was maybe lucky, but two wins against these teams shows a sign of a good team and we’ve shown it all spring. This team has character and heart and they’ve proven they can get the job done this coming fall.”

The Miners’ last spring exhibition game will be Saturday, April 23, against Eastern New Mexico at University Field. Kick off for the game is slated at 5 p.m.

Christopher Piñones may be reached at [email protected]