Centennial Plaza designed to be eco-friendly 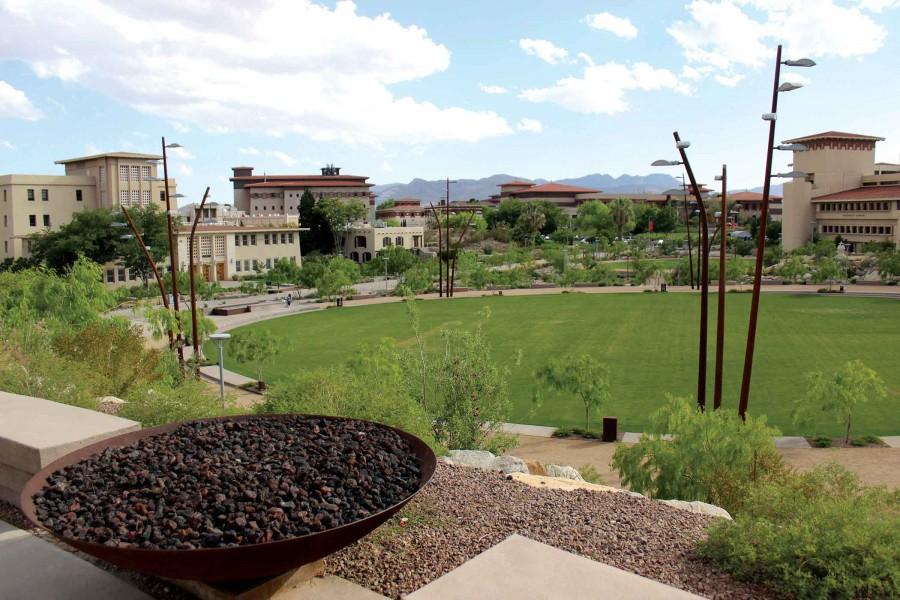 The Centennial Plaza, which opened one year ago this month, is a reflection of the region’s natural environment, and has become a tool in UTEP’s plan to save water.

“The university wanted, in their long-term plans, to create a more pedestrian-friendly campus and eliminate as much automobile traffic from campus as possible,” said UTEP grounds supervisor Bruce Erhard. “The real keys were to make the landscape fit more suitably to the environment around us, the desert, and we wanted a landscape that would use less water over time.”

According to Erhard, Centennial Plaza saves between 30 to 35 percent more water from what a traditional landscape would use.

“The (grass lawns) might work quite well in Pennsylvania, but it’s out of character out here,” Erhard said.

UTEP students and faculty alike will all eventually have to say goodbye to the grass lawns and tall trees of Cotton Memorial and Benedict Hall and say hello to the Southwestern-style landscapes of the future.

Staying in character is the plan, while saving water is the game that will get easier over time. All the plants that surround Centennial Plaza require more watering on a consistent basis, and are what Erhard calls in the “establishment phase.”

According to Erhard, in three to four years irrigation can be reduced by as much as 50 percent as the plants move out of the establishment phase. The path to saving more water requires no regulations, no invasive planning and no strict guidelines to adhere to. All is that is needed is time.

On top of that, it will save money, in a city where water costs a pretty penny.

“As these plants get well-established over time we can reduce that amount of irrigation they get quite significantly,” Erhard said. “Water is quite expensive in El Paso and it’s not going to get any cheaper, it’s going to get more expensive and using less water means less being spent.”

For all the talk of water conservation and eco-friendly adaptation, the goal of Centennial Plaza was to create a more hospitable pedestrian area. The environmental benefit was an important side note that Erhard happily admits.

“We want to save water, we want to be ecologically friendly and we want to be sustainable,” he said. “We want to be all of those things, but first before anything, we wanted to create a space that was truly superb for the user. That was our goal more than anything.”

A more inviting space might have been the top goal of the campus transformation, but the positive environmental benefit is what some UTEP students are most pleased with.

“I think it’s the loveliest addition to our campus,” said Fernanda Lugo, sophomore biological sciences major. “I am proud to be a UTEP student because of it. Having a semi-not so wasteful plaza for people to reflect in is the best way to advocate for what we wish to achieve as a college community and as a green growing place.”

Lugo, president of the Students Green Team, a UTEP organization that aims to promote environmental activism, is happy about what Centennial Plaza represents and hopes it jump starts a stronger student movement to make UTEP a cleaner and greener campus.

“I wish UTEP students took more ownership of the campus and have more interest in taking part in activities like Earth Week,” Lugo said. “The road to change is always hard, changing a whole culture’s morality regarding money, trash, plants, animals and man’s relationship with nature will be tough.”

Senior environmental sciences major Daniel Chacon said he thinks the Centennial Plaza is a step in the right direction, but believes the university can do more when it comes to green issues.

“I strongly believe that UTEP doesn’t do nearly enough as it could be doing and as it should be doing in regards to environmental initiatives,” he said. “UTEP needs to focus a little less on the immediate financial returns on their eco-friendly investments and focus on the long-term social change and financial relief that comes with reducing your overall ecological footprint.”

Chacon said UTEP needs a better recycling program, for example, and the university needs to do a much better job of communicating environmental projects.

Nevertheless, UTEP is on the right path to becoming a more eco-friendly campus, which will get better as time goes on, according to Erhard.

“When I first saw the blueprints (for the Centennial Plaza) I said this is going to be one of the great public spaces in the state of Texas,” Erhard said. “It has exceeded my expectations, and it’s going to do nothing but get better over the next 10 years.”