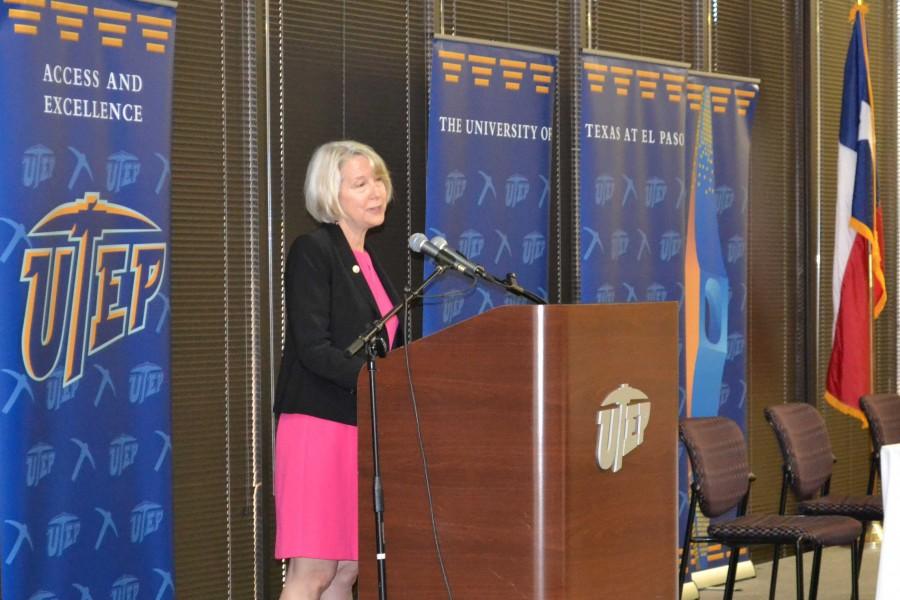 In 1961 Texas Western College (now UTEP) and Rutgers University were the first universities with students who volunteered for the Peace Corps. Now 55 years later, the director of the Peace Corps made her first visit to El Paso and addressed a full crowd at the Tomas Rivera Conference Center on the third floor of the Union East Building.

Director of the Peace Corps, Carrie Hessler-Radelet, came to the university with a special announcement. Today, April 13, the Peace Corps announced their 2016 rankings of the top volunteer-producing Hispanic-Serving Institutions nationwide.

UTEP ranked No.12 nationally. This is the first time the university has placed among the top HIS’s in the country for volunteers and is one of two universities to rank in Texas.

Rankings are based on fiscal year data for 2015 and collected from self-reports by Peace Corps volunteers.

“It is a diverse student body and it is our goal at Peace Corps to recruit a volunteer force that represents the multicultural fabric of our nation,” Hessler-Radelet said.

Senior multimedia journalism major, Kimberly Valle, was one of three panelists at the announcement today. She will be volunteering for two years with the Peace Corps staring in September, where she will be teaching English to students in Morocco.

This is not the first time Valle will be visiting the country–she studied abroad in Morocco last year for six months.

Aside from teaching English, Valle said she wants to make sure to incorporate women empowerment to the students she teaches.

“I really want to focus on that because a lot of women don’t realize their potential. I know I met a lot of women who were around my age who are barely seeking their potential and they don’t have the opportunities like we do,” Valle said. “I want to empower them the most because we need them to use their power to make a difference.”

UTEP President Diana Natalicio, who introduced Hessler-Radelet during the event today, said the recognition the university is receiving will benefit UTEP students.