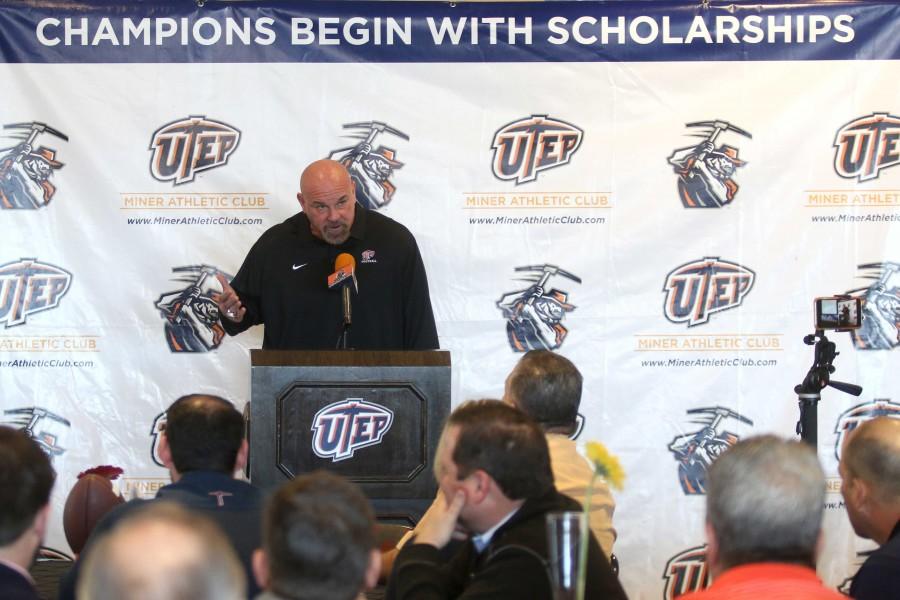 UTEP football head coach Sean Kugler presented 24 new additions to the team on Feb. 3, who will sign their national letter of intent to play at UTEP.

From Texas alone, the Miners gained 19 athletes. Out of the other 24 signees, two come from Washington, and one from Maryland, Kansas and California.

A key project that Kugler has improved since being here is local recruitment. UTEP obtained seven individuals from the Sun City, the most in a recruitment class under Kugler. Now, the Miners have signed a total of 17 El Pasoans throughout the four years Kugler has been with the school.

“The guys we got, we are very excited about,” Kugler said. “I have goals as a head coach to have a player from every single high school on this team.”

This class that Kugler obtained have demonstrated the ability to move. Whereas last season they signed a strong recruiting class, this year shows major agility.
“I think we got more speed than we anticipated with this class, which we will always take,” Kugler said. “Our goal was to build up both sides of the ball – the offense and defensive line. Now you are going to see a 3-4 on the defense, so it will be new players in those position.”

At times, recruits that have committed to a college, end up de-committing. Even though Kugler experienced individuals who decided to take their talents elsewhere, he believes it is just part of the process.

“There’s some heartaches – you lose some guys who you’ve invested a lot of time in,” Kugler said. “It’s very rewarding to put so much work into some of these boys and have them stay loyal.”

“Usually what we do (as a staff) is take a few days off after this whole process,” Kugler said. “Don (Yanowsky) was outstanding. He’s been at some outstanding places. Don, Theron (Aych), Brent (Pease) Tom (mason) all knocked out recruits and they’ve only been here a short while. Not only excited about their coaching capability, but excited as far as recruiting.”

Here is a list of the Miners’ recruits for 2016 per UTEP Athletics:

On Thursday, Feb. 4 Kugler announced the 2016 football schedule. The Miners will open their season at home against New Mexico State on Sept. 3. Then they will travel to Austin to take on the Texas Longhorns on Sept. 10. Afterwards, they will return to the Sun Bowl to take on Army on Sept. 17.