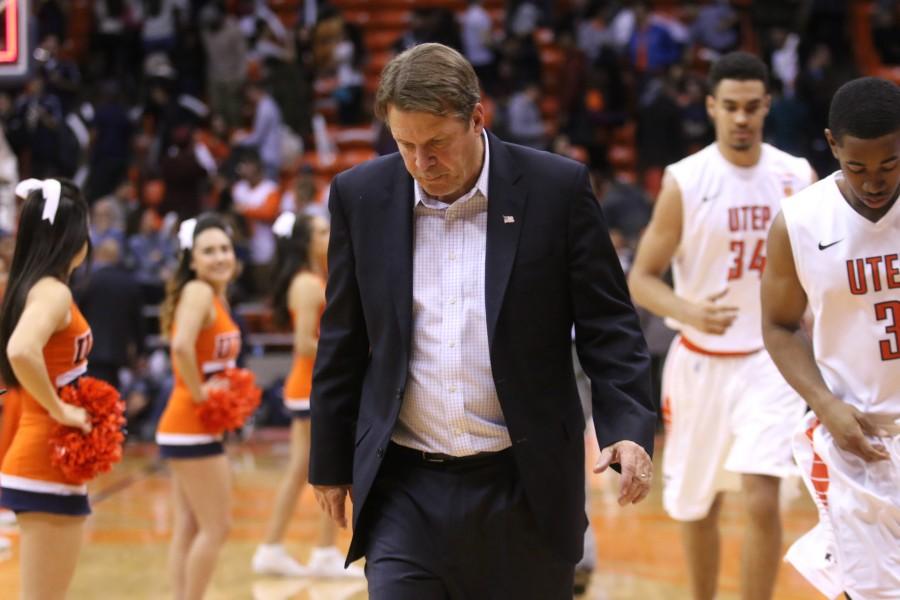 Head coach Tim Floyd looks down after a 73-53 loss to NMSU.

Omega Harris came off the bench for the Miners and knocked in 23 points for the Miners. However, it was not enough to snap the Miners’ three-game losing streak, as NMSU beat UTEP for the second time this season, 73-53.

Despite starting the season with six consecutive victories, UTEP (6-4) now finds themselves in a four-game rut after the loss against NMSU.

Ian Baker, Jalyn Pennie and Pascal Siakam of the Aggies made it past double digits in scoring against the Miners, totaling 26, 14 and 14 total points, respectively.

“I’m not very pleased with the way we are playing right now,” Floyd said. “We look very small at times. We look very unphysical at times on the court. The reality is we probably were.”

Although, prior to the resurgence from the bench, the Miners found themselves in foul trouble early. Hooper Vint was sidelined for the majority of the first half after being called on for three personal fouls, resulting with the Miners starting the first ten minutes with seven personal fouls. NMSU also capitalized on turnovers in the first half, scoring 11 points off UTEP’s mistakes.

“We played frustrated,” Floyd said. “We got ourselves in a hole after turning the ball over four straight times.”

It was the season debut of guard Omega Harris, who led the initial comeback for the Miners. Harris came off the bench and hit five-of-six from the floor, nailed a pair of threes and totaled with 16 points in the half. Harris, along with the rest of the bench, accumulated for 28 of the team’s 31 points in the opening period. Paul Thomas, Earvin Morris and Tevin Caldwell each put up four points coming off the bench.

The Miners also out rebounded the Aggies 17-14 in the first half, something they have struggled with most recently.

However, during the second half, NMSU broke away and stole the game. The Aggies stormed out of the half with a 12-5 run in the first five minutes. Nothing seemed to go right for the Miners offensively, and were left to play catch-up for the remainder of the half. Like the first half, the Miners found themselves in foul trouble quickly again, leaving NMSU in the double bonus nearly halfway into the second half.

After NMSU called a timeout approaching the seven-minute mark, they prevented a UTEP comeback, outscoring the Miners 15-6 in the last stretch.

A major game-changer was the Aggies rebounding in the second half. They out rebounded the Miners 24-10 in the half, and 38-27 on the night.

Earvin Morris, Lee Moore, Dominic Artis and Hooper Vint each posted their season low for scoring, all individually totaling under six points or fewer. NMSU dominated defensively in the second half, holding Harris to seven points.

Prior to the four-game slump, guard Dominic Artis was averaging 11.7 points per game and 5.2 rebounds per game. However, during the four losses, Artis averages 9.25 points per game with 2.5 boards per game. Artis finished the night with five points and a pair of rebounds.

“Losing in the most frustrating thing right now,” Artis said. “We worked so hard in practice all week.”

The Miners hope to snap the four-game losing streak on Monday, Dec. 21, as they host Northfolk State in the WestStar Bank Don Haskins Sun Bowl Invitational. If the Miners win or lose, they will face the winner or loser of the Sam Houston State-UC Irvine game on Tuesday, Dec. 22.