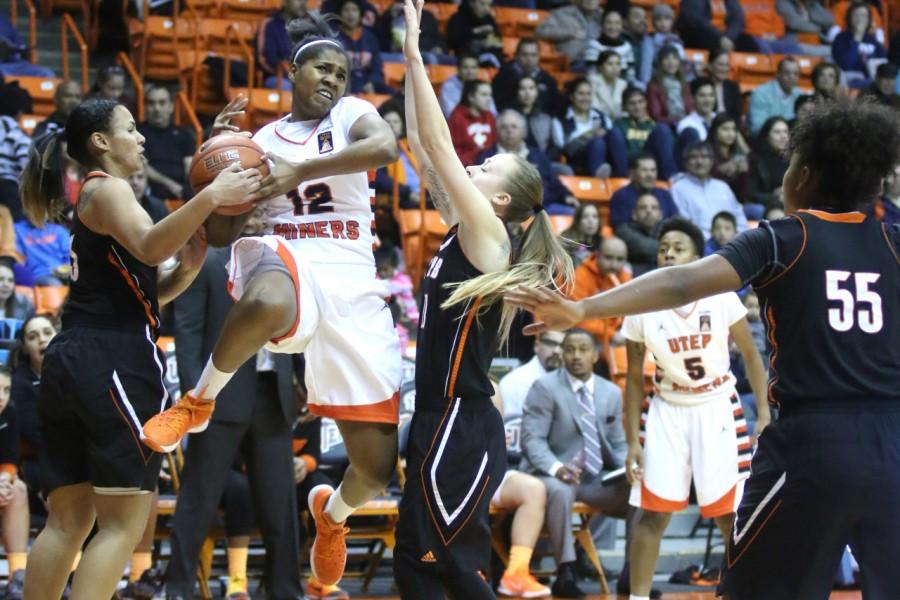 The UTEP women’s basketball team played host to University of Texas Permian Basis, on Monday night. The Miners were able to keep UTPB in check as they won a dominating game 86-32. They are thus far perfect, rolling at 8-0.

This win proved to not just be a big confident booster at home but the Miners also were able to remain perfect through out this early campaign. The Miners are starting their 2015-16 season at 8-0 for just the third time in UTEP women’s basketball history.

“It feels great, I think the thing that I have enjoyed as a team so far is that we have played hard, and we’ve competed,” head coach Keitha Adams said. “I didn’t like the first quarter today we weren’t in that intense mode that we have in the other games, as long as your competing and playing extremely hard, good things happen, we’ve done that, I’m enjoying coaching our team for that reason.”

The Miners now 8-0 dominated ever facet of the game. The Miners dominated both on offense and on defense in this rout over UTPB.

“It was kind of slow in the beginning, I mean we have been off for a week besides practice for a week, but we got on the floor and started committing turnovers,” guard Starr Breedlove said.

Despite the back and forth early lead changes in the first half, the Miners did not let UTPB grasp a lead of any sort.

The hot start on offense resulted in the home team shooting over 65% from the floor in the first quarter. Cameasha Turner led the Miners in points in the first she had 6 points in a contested quarter where the Miners lead by as many as 8. The Miners closed the quarter with a 21-15 lead over UTPB.

The second quarter was the Miners for the taking; UTEP controlled the ball and the quarter. The Miners capitalized off turnovers, resulting in 14 points off of turnovers. The UTPB falcons only scored three points in the second quarter.

“Our defense has been our number one thing, we have to be great on the defense and that gets our offense going,” Coach Adams said.

UTEP also made the best of their opportunities from the free throw line shooting for 75% from the line. The Miners dominated every facet of the game early on to help the miners go into the half with a 36-18 lead over UTPB.

UTEP not only beat UTPB by over 50 points but they set a new record for opposing field goal percentage. The Miners made sure that UTPB got cold and stayed cold as they shot for 16% the lowest percentage in program history.

The Miners ultimately took care of the game as they continued to score off of turnovers. The Miners finished the game with a total of 27 points off turnovers and had 20 fast break points. The win could be a huge confidence boost before their next game when they go on a two game road trip.

The Miners will look to continue their perfect record on the road when they take on Long Beach State and UNLV on Friday and Saturday, respectively, before returning to the Don Haskins center where they will take on Eastern New Mexico on Dec. 28.