Miners show promise for the future even in a rebuilding season 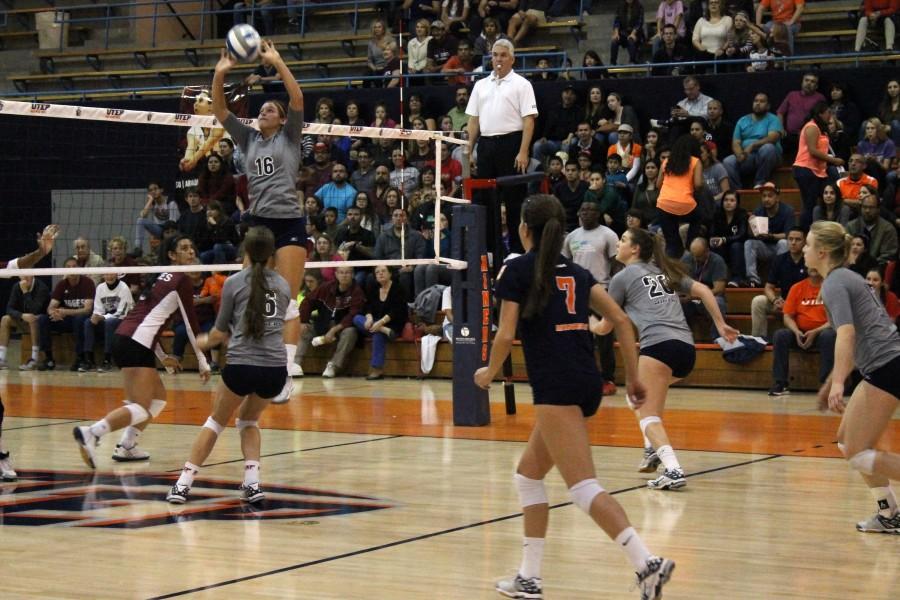 The UTEP volleyball team lost their last match of the season to New Mexico State last Wednesday on Nov. 25.

This past Wednesday, Nov. 25, the UTEP volleyball team fell in their final match of the season against the New Mexico State Aggies 3-0 (25-23, 25-21, 25-21). Despite being outmatched, the Miners put up a strong fight to conclude their season, in one of the highest attended matches at Memorial Gym this season.

The match was emblematic of the Miners’ season, closely contested with short burst of solid play, but not enough consistency to close out sets and come out with the win. Coming into the season, the Miners were hopeful of a positive season, after a ghastly 2014 season that came with just seven wins and only one win on their home floor.

Then injuries, inabilities to close out sets and a lack of experience became too much to overcome. The Miners improved their win total by two to finish the season with a pedestrian 9-23 record, and all in all another disappointing close.

Nevertheless, the talent is young and the future is bright. The 2015 season turned out to be another rebuilding season that will be a precursor to a brighter future.

“It’s been a rebuilding season,” said senior Ashely Peak. “We have a lot of young girls and just three seniors graduating. They have to cover some ground as far as defense, but they are going to be stacked for next year. I think they’ll do pretty good.”

Peak, like many of the upperclassmen, has had to endure a tough past two years, only seeing 16 wins in more than 60 matches. Although being excited for what the future holds, Peak will miss her time as a collegiate volleyball player.

“It feel weird because I’ve been playing for 12 years, so I’m going to miss it,” Peak said. “I’m gonna miss the crowd, adrenaline, teammates, but I’ll still come and watch them and support the Miners.”

Peak is graduating with a bachelor’s degree in marketing in December and is staying in El Paso to get her second bachelor’s in finance. Other departures besides Peak are Naomi Whitehair and Talia Jones. Whitehair was a defensive specialist who was in and out of matches, while Jones was the Miners’ premier offensive specialist at outside hitter for the past two seasons.

“It’s going to be tough to lose Talia (Jones),” said head coach Holly Watts. “She had her moments where she was unstoppable. We’ll have to recreate that.”

Jones was a bright spot in a very dim offensive attack that the Miners put out on the floor. The senior led the team in kills, with 329 this season. Despite Jones and a talented setter in Lindsay Larson, the Miners were competitive solely because of their defense.

“Our blocking and our defense were our bright spots,” Watts said. “Our blocks and digs per set in conference and national rankings were up there and pretty decent. Whereas our hitting percentage and kills per set were not.”

The Miners posted one of the worst hitting percentages in Conference USA. The win totals were low, the statistics were bland and the individual accolades never poured in, but coach Watts saw growth from a very young team.

“I think there was a lot of growth,” Watts said. “There was some improvement in areas, but our offense is young still. We had some good players on the bench, who didn’t get a lot of opportunities this year, but they’ll have more opportunities in the future.”

This season showed that the Miners were simply a bad team, but their season was also hindered by  injuries.

Sophomore Collene Coessens’ midseason injury that saw her miss nearly the rest of the season was the straw that broke the camel’s back. The Belgium native suffered a collapsed lung, which effectively ended her season. Coach Watts was forced to switch lineups, play players who would not be playing, while finding ways to combat continuous injuries.

Granted injuries are a part of sports, Watts and her players made no qualms about the injury-plagued season and chalked it up to the nature of volleyball. It was a season of uncompleted goals, but the optimism for the future is still intact.

“It didn’t go as we hoped,” Larson said. “One of our goals was to make conference tournament and we are disappointed that we couldn’t make it. But we had a lot of really good matches within this season. Next year, if we can build on finishing matches, we’ll do really well.”