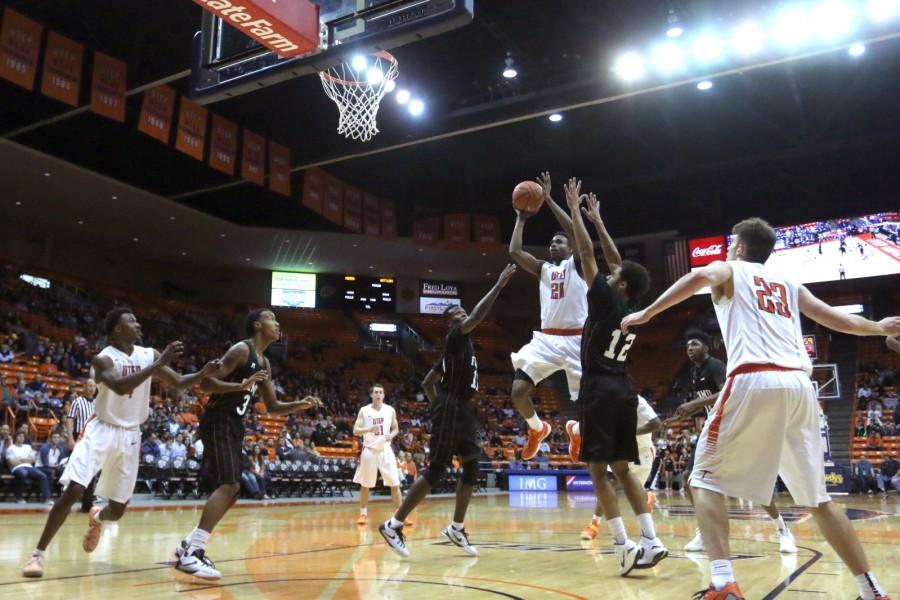 This season has shown that one night Dominic Artis will lead the troops. However, on the other nights, Lee Moore steals the spotlight. And that is exactly what Moore did in the 72-54 victory over the Florida A&M Rattlers.

Finishing with 17 points, Lee Moore contributed to the not-so-pretty 18-point victory over the Rattlers in the second game of the Corpus Christi Coastal Classic.

Moore caught fire early in the game, scoring 15 in the first half, but, along with the rest of the offense, was halted during the second half, closing with two points.

Although the Miners held on to a strong win, head coach Tim Floyd criticized the way that the home team finished the game.

“It was a sloppy game,” Floyd said. “In the first half we had three turnovers, and in the second we turned the ball over 15 times. It was ugly basketball.”

The (4-0) UTEP men’s team was relentless on defense, causing the undisciplined Rattler’s team to create 21 turnovers on the night. This was also the first time since the 1970s that the Miners kept a team under 40% in shooting.

“This game was very important for us tonight,” Earvin Morris said. “Now we are focused on (Corpus Christi).”

Floyd credited the struggle in scoring during the second half to simple mistakes made by the offense.

“It’s very difficult for Lee Moore to score when the ball is being thrown out of bounds,” Floyd said. “He didn’t have many opportunities.”

In the first half, the Miners opened up the first eight minutes with a fierce 20-4 run. Moore had a dynamic first half and led the Miners in scoring with 15 points. With help from Terry Winn, who put up nine points, the Miners led the Rattlers by 24 points after 15 minutes.

“First half our defense was good,” Artis said. “The second half definitely lacked. Transition we saw it the most, stopping the ball is something we have to work on.”

After the break, a late rally was nearly impossible for the visiting team, even though UTEP’s offense continued to make simple turnovers. The Miners allotted minutes to a multitude of players, including Jake Flaggert, who finished with five points, and Paul Thomas, who recorded seven boards.

They finished the half with 15 turnovers, which in total, resulted in 18 points for the Rattlers.

“We were up big, but there was not that much time left, so we stalled and stopped playing aggressive,” Artis said. “We were careless with the ball and there is no excuse for that. Something we need to work on.”

A new face for the Miners, freshman Christian Romine, saw a substantial amount of minutes on the night. Romine missed the first three games due to an apparent injury. Romine finished the night with a pair of buckets and a rebound.

“I think in the first half Christian was really good and encouraging,” Floyd said. “But he didn’t need to turn the ball over four times in the second half. That is his first game and he will get better.”

Now two games deep in the Corpus Christi Coastal Classic, the undefeated, 4-0 Miners find themselves in a promising position to finish the invitational strong. They ended their four-game homestead against the Rattlers on Tuesday. The squad will travel to Corpus Christi, Texas, on Friday, Nov. 27 to face Southern Illinois (5-0), and then play either Colorado State or Portland on Saturday, Nov. 28.

“It will be a good game against Southern Illinois,” Floyd said. “They have two nice wins—one against a Kent State that we went into overtime with last season. They have good guard play.”

Morris is excited to grow with his squad and travel on the road. This will be the first time this season the Miners will hit the road against an opponent.