War on journalism in Mexico–a war on human rights 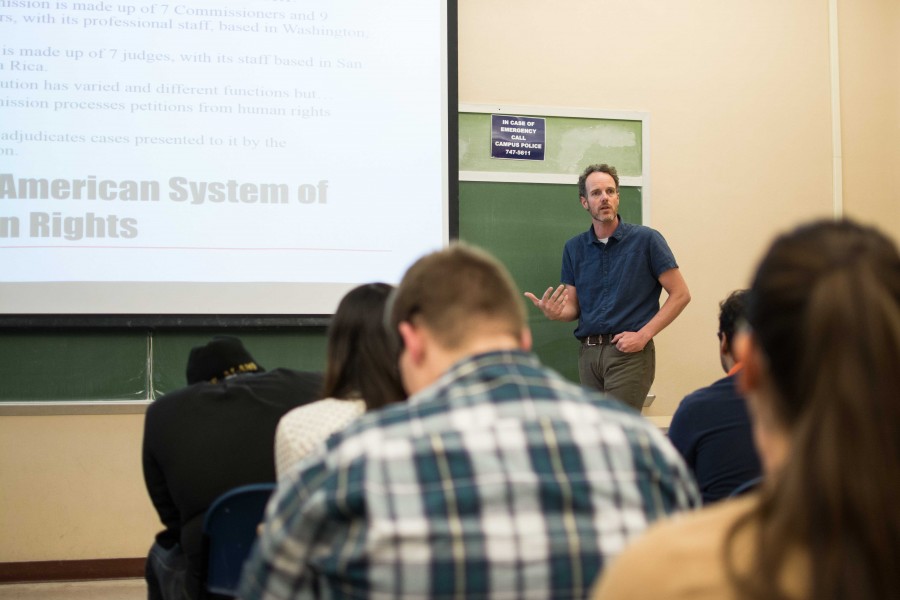 Dozens of UTEP students, staff and borderland residents gathered to listen to EPCC professor Patrick Timmons speak on Friday, Nov. 13 at UTEP’s Liberal Arts Building. Timmons was on hand to speak about human rights and the situation journalists currently face in Mexico. The discussion, which was part of a colloquium series organized by the Department of Political Science, centered around the importance of following up on potential cases of human rights abuses and how they can be brought before international organizations.

The talk was held on the seventh anniversary of the death of Armando Rodriguez, a reporter for El Diario de Juarez, a local newspaper. Rodriguez, known for his work in crime reporting, was killed outside of his house and in front of his daughter.

The discussion shed light on the issue for several UTEP students.

“I didn’t know about the murders of journalists in Mexico,” said Erica Rodarte, a junior philosophy major.

Murders that some say belong in international courts.

“The case of Armando Rodriguez is a failure of human rights,” Timmons said.

Murdered journalists go beyond a life being taken. Timmons argues that the effect of a journalist’s death is felt by more than just those around him, but society as a whole. According to Timmons, killing journalists as a way to silence them, or in retribution for their work, is an attack on society’s right to be informed.

Timmons explained that the work done by journalists affects more than just themselves,  as they are the ones who keep a society informed—an aspect crucial to a functioning democracy.

The link between the rights to life, in the case of journalists, and the right of a society to be informed, however, has only been established in court once, according to Timmons.

He said the only case where the murder of a journalist was shown to deprive society of its right to be informed was overseen by the European Court of Human Rights in 2008 as Dink v. Turkey. The case, according to Timmons, has not been officially translated into English, which prevents the anglosphere from using it as legal precedent. Precedent that, he says, should be established in the Inter-American Court for Human Rights.

No cases for murdered Mexican journalists have ever been heard.

The Organization of American States has its human rights protection system split into two parts: a commission and a court.

According to Timmons, for a murder case to transcend the municipal, state and national jurisdictions and become a case of the human right to life, it must not have been given proper follow-up by the original authorities. Although the violation is as instantaneous as the death, it doesn’t become an international issue unless the government doesn’t take responsibility for the investigation that would normally bring justice to families.

Once the proper follow-up to cases hasn’t gone through, Timmons explained the duty now falls on the families of those murdered.

“What’s really important about the commission is that it receives petitions from human right victims,” he said.

Those murdered are not the only victims. People like Ximena Rodriguez, Rodriguez’s daughter, are deprived to their right to a family.

Timmons said the petitions need to be started by family members in order to be taken to the Inter-American Human Rights Commission and eventually to the court.

Until then, Timmons said, not much can be done to protect those now working in the press.

“What is the purpose of these murders?” Timmons said. “To silence the people who shine light on crime.”

Julio Cesar Chavez may be reached at [email protected]