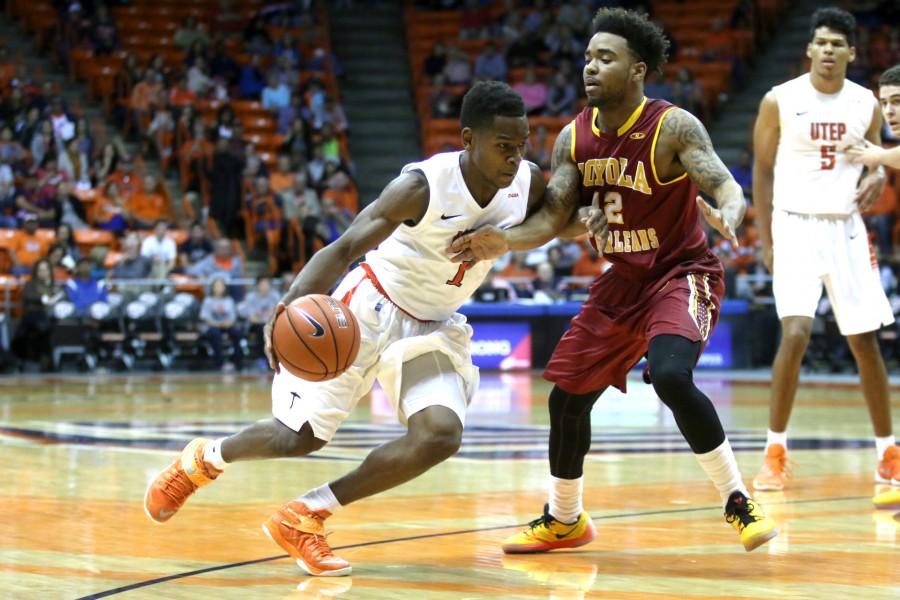 Beginning its 95th season of basketball, the Miners opened their season with an electrifying 96-49 victory over the NAIA Division I Loyola Wolf Pack.

Prior to the game, UTEP head coach Tim Floyd explained that the offense was expected to run a fast-tempo system on the floor. That is exactly what the Miners did against the Wolf Pack in the 47-point win.

“As far as openers go with so many new players, I think we have to be basically pleased,” Floyd said. “I thought we did some nice things in the back court. Our defense was active. Much better in terms of collectively playing together.”

Lee Moore, Dominic Artis and Hooper Vint all reached double digits in points, scoring 17, 16 and 15 points, respectively, and contributed for 50% of the team’s points. Artis nearly stole a triple-double in the home opener, with nine rebounds and eight assists.

“I think (Dominic) has the chance to be a really great player,” Floyd said. “He’s got things to work on, just like everyone else. But he’s got a chance, as does Lee Moore, in the back court. They’re both playing hard.”

“The last game and this game was black and white,” Artis said. “The difference was just enthusiasm, something we lacked in the first game. This being the home opener it was a lot different.”

In the first half the Miners earned a commanding lead. With the help from a Lee Moore bucket, the Miners took a quick 6-2 lead. Then they followed the four-point lead with a 19-0 run.

The Wolf Pack fell behind by 30 points at the half, trailing 53-23 to the Miners. Artis led the first half with 14 points, followed by Moore and Tevin Caldwell who both totaled nine points. Caldwell also led the half in boards with six.

After the half, the Wolf Pack could not gain any sort of momentum and continued to make simple mistakes; nonetheless, the Miners capitalized on the opposing team’s errors and forced 21 turnovers. Artis’ boards tied Caldwell’s nine rebounds on the night, which led the Miners.

Making it to the line 47 times during the game was a key ingredient in the win for the Miners. With the number of fouls called in a game intensifying, Floyd believed his squad exploited the Wolf Pack’s undisciplined defense and made a statement from the charity stripe.

“A lot of stoppage of play and a lot of free throws will be attempted this year,” Floyd said. “The whistles are very tight. We’re seeing guys throw their bodies into players on drives and get fouls – our guys included.”

The Miners ended the night shooting 70.2% from the free throw line, connecting on 33 of 47 shots. Vint, who made five of six free throws, agreed with Floyd’s statement about the boost in free throw attempts.

Despite connecting on 30 out of 63 field goals, the Miners only hit 3 of 15 three-pointers. The 47.6% field goal percentage was not enough for Artis’ liking.

“We get up a lot of shots, I think it’s the jitters,”Artis said. “A guy like Trey (Touchet), he shoots everyday after practice, takes a lot of shots. Sometimes I shoot with him and he out shoots me. I know he can shoot, so it’s just confidence. Him and Jake (Flaggert) just need confidence. I know it’s early so it’s going to come along.”

Throughout the game, the bench for the Miners was shown in its near entirety. New faces, such as Victor Mbachu, Paul Thomas, Trey Touchet and Ivan Venegas, who all appeared in the exhibition games, played their share of minutes. The bench also added 36 points and recorded 29 rebounds throughout the game.

“These new players need these minutes in these games,” Floyd said. “They need to try to get out there and make mistakes. It was an important game from that standpoint – just like the two exhibition games. We’re seeing growth, that’s what it’s all about.”

The Miners finished the first of their four game home-stretch, the first time they have been at home four times in a row during Floyd’s career. They will face Texas State next Saturday, Nov. 21 at 7:30 in the Don Haskins.