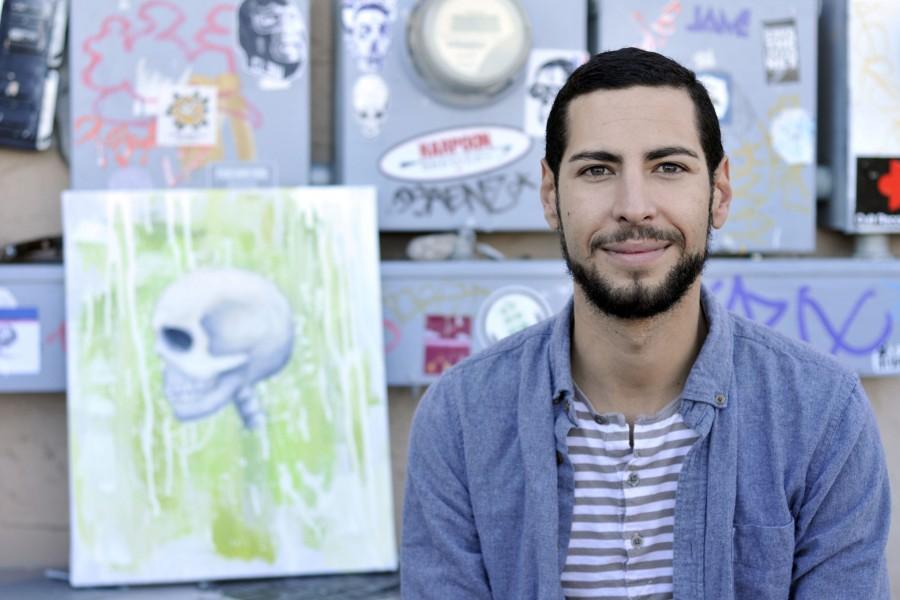 Sergio Cuerto, coordinator of “Mundo Muerto: A Collective Art Show,” which will open on Saturday, Nov. 18 at the Glasbox on 210 Poplar St.

The concept of death is understood and dissected differently among nationalities, cultures and individuals. The impression about what happens after our natural life on Earth is over varies between many factors, but one local event will cast light on the issue that some might consider to be taboo.

“Mundo Muerto: A Collective Art Show,” which will open at 6:30 p.m. Saturday, Nov. 14 at The Glasbox on 210 Poplar St.  hopes to evoke conversation and understanding of the occurrence of death through art. The event will feature live painting, photos, film screenings, music and live acting to conceptualize death.

Mundo muerto means dead world in Spanish. On the border, where holidays such as Día de los Muertos are celebrated, the idea of death is something that is central within these traditions.

Sergio Cueto, coordinator of the event, said the exhibit is designed to cast a light on death.

“The art show puts the topic of death in the spotlight, but it does it in an way that is innovative,” Cueto said.

Cueto also said the event is aiming to highlight the death-denying society that people reside in today.

“We’re constantly bombarded by the media with methods of how to stay young, how to live life to the fullest, how to maintain beautiful, but on the other hand, we are also exposed to death in various ways,” Cueto said. “We see war on the TV, we’re told about diseases and healthcare issues, abortions, police brutality–these are all ways that the media also exposes us to death.”

According to Cueto, “Mundo Muerto” is a way of encouraging people to live their lives as naturally as possible while encouraging conversation about both the mortality of human life and the falsified idiom of immortality by pop culture.

“The theme might seem off-putting, but death is opened to many interpretations. We all grieve differently, remember the deceased differently,” Cueto said. “Of course there is a dark tone to the event, but it’s also promoting the celebration of life and the perseverance of human beings. The event will heighten your senses–making, you feel alive.”

“There is so much local talent,” Cueto said. “This is a perfect event to use as a creative outlet for issues that aren’t considered to be of open-topic.”

Andrew Barahona, creator of the event, said it has been in the process of development since mid-August.

“I wanted to develop a very interesting art show. I thought about how the border community perceives death differently because of our mostly Mexican heritage,” Barahona said. “In our culture, we celebrate death as a way to honor life instead of seeing it as a tragedy entirely. It’s not as taboo amongst us.”

Barahona also said the theme of the event has helped participating artists to step outside their comfort zone.

“The artists are intrigued,” Barahona said. “It is allowing them to do what they haven’t done previously. It’s an exciting element instead of a troubling one.”

Ivan Calderon, a UTEP alumnus, will be one of the artists participating in the event. Calderon got involved with the event in order to reach a larger audience.

“As an artist you’re always seeking to communicate to a larger audience and I try to never turn down an opportunity to exhibit work,” Calderon said.

Calderon said death played a major role in his work as an undergraduate student.

“I had two cousins slain in the streets of Juárez, seven months apart,” Calderon said. “My education became my coping mechanism as I tried to understand this tragic situation. My work was analyzing violence in Mexico from a historical and psychological perspective as well as social.”

Calderon said his pieces will depict the worshipping of Santa Muerte and appropriation of Día  de los Muertos and other Mexican iconography in America amongst the racial climate regarding Mexicans. Calderon also said that he would participate in the art show because of the charity behind the show. Cueto said proceeds would be donated to Ojos de Dios, a non-profit organizations for children with disabilities who have been abandoned.