Palacios making an impact as a freshman 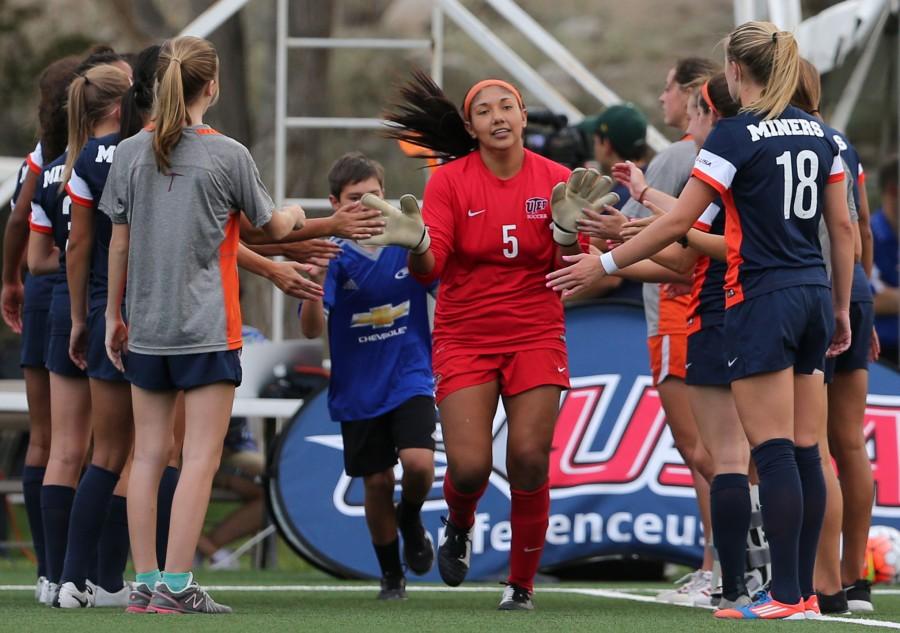 Flashback to Aug. 21, freshman goalkeeper Alyssa Palacios prepares to start her first college game against Eastern Washington. Head coach Kevin Cross came to Palacios and gave her the starting job. Timidly and nervously, she jogged on the field and faced her first opponent. After 90 minutes, the score was 2-1 in favor of Eastern Washington.

Flash-forward to present day, Palacios enters her 17th game as keeper. Determined, confident, she sprints onto the field and anticipates the conference game against Southern Mississippi. This time after a long double overtime battle, the Lady Miners came out on top against the Golden Eagles, 3-2. Palacios recorded eight saves in the win.

After 17 games, Palacios has recorded 94 saves and holds five clean-sheets for the Miners. Entering her last three games of the season, the freshman keeper feels more comfortable and self-assured than ever.

“Now that I have more games under my belt, I’m more confident going into games by being more experienced from the games we’ve played so far,” Palacios said. “Our defense’s chemistry has gotten so much better too. I’m not as timid making decisions.”

Coach Cross started Palacios the first game of the season after Keighton Allen was sidelined with an injury. Palacios has started every game ever since.

“She’s been phenomenal for us, shown a lot of maturity,”  Cross said. “She had a real big opportunity, but it was also a difficult one being a freshman in that position. Her character is awesome. She wants to please her teammates, works really hard and just has an awesome attitude.”

Prior to joining the Miners, Palacios experienced a soccer career that served as preparation for the division one play. The native of Carrollton, Texas, was a member of the club team Sting.

On two separate occasions, Palacios and her club team won the Elite Club National League National Championship – when she was in eighth grade and then as a junior in high school. One of the most positive experiences Palacios had on the club team was being on the same squad for most of her soccer career.

“I was on one club team all my life, so it was hard when we all had to go to college,” Palacios said. “It was a great experience being with the same group of girls throughout middle school and high school.”

Adjusting to a new team after joining the Miners was a challenge for Palacios at first, but now she has grown accustomed to her new teammates and coaches.

“I was only on one club team all my life, so it was so different having to get to know a whole new set of girls,” Palacios said. “I think I’ve done a pretty good job. I do what I can and do my best to support my team. “

As a goalkeeper, one of the main jobs is working closely with the defenders to ensure better communication. Defender Alexa Baine stresses the importance of the role Palacios plays on the team.

“I think it’s a huge accomplishment as a freshman to come onto the team and fill such a big role as keeper,” Baine said. “She’s progressed every game as far as being a leader – vocally on and off the field. I think it’s awesome what she’s doing right now.”

Like Cross, Baine agrees on the growth that Palacios has experienced thus far and has confidence in the experience she will gain.

“Being a keeper in general is a huge responsibility and I think for her to come in as a freshman, fill that role and do such a good job is an amazing thing for her,” Baine added. “She plays every game confident. She’s always saving our butts back there and always coming up big for us. I love having her behind me.”

Besides maintaining her job as keeper, Palacios is determined to reach Sarah Dilling’s record for all-time most clean-sheets in UTEP history. During her four years at UTEP, from 2010-2014, Dilling recorded 20 clean-sheets overall and also leads the single-season clean-sheet record with eight.

In her first year, Palacios’ five clean-sheets places her tied at fourth all-time for the single-season shutout record.

“I see Dill’s name for shutouts and I hope one day I can just get as many as her,” Palacios said. “I want to contribute as much as I can and continue to make an impact in games.”