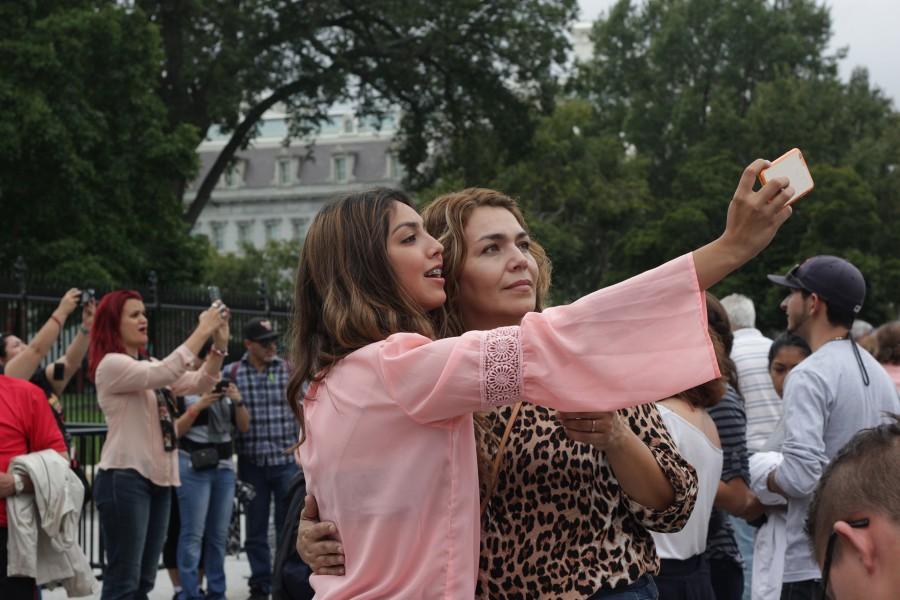 amanda guillen/ SHFWIRE Crystal Zapata, 19, takes a selfie Tuesday with her mother, Lourdes Zapata, 39, in front of the White House

WASHINGTON – As they stood in front of the White House snapping pictures, about 50 members of the Neocatechumenal Way in El Paso, Texas, were still reeling from their experiences following Pope Francis’ tour of the United States.

For these El Pasoans, distance did not matter when it came to seeing the pope and participating in the Festival of Families that took place on Sept. 26 in Philadelphia.

Of the 80 people who took part in the pilgrimage, eight were members of the Zapata family.

Lourdes Zapata, 39, a stay-at-home mother to her six children, coordinated the trip with her husband, Roberto, 44. The group went to New York, Philadelphia and Washington.

Zapata said that, aside from seeing the pope, one of the group’s main goals was to show support for the Catholic Church and the traditional family.

She said that Catholicism is an integral part of her family’s foundation.

“We see how good God has been to us, and we have no other way to thank him than to give our lives to him. We have opened ourselves to life and having as many kids as God wants us to. It has not been easy to do, but he has been really good to us,” Zapata said.

At the Festival of Families in Philadelphia, Pope Francis spoke about those issues.

“All of the love that God has in himself, all the beauty that he has in himself, he gives it to the family, and the family is really family when it is able to open its arms and receive all that love,” he said.

The Zapata family had been saving up for a new car and dining set but quickly put that aside when they heard about the pope’s visit.

Julie Orona, a sales worker in El Paso, said that, although she was unsure if she would be able to make the trip, everything fell together.

Orona is divorced and has one son and two grandchildren. She said that, although times can be hard, this group and her faith have brightened her spirits.

“These families, we back them up. It is hard being single, but seeing them, you live, you live through them and you want to see that,” she said. “You encourage them, and they encourage you and you see that there is a God.”

Orona’s trip was filled with spiritual and fun moments. While waiting along Benjamin Franklin Parkway in Philadelphia to see the pope pass by in his white Jeep Wrangler,  she saw him bless two babies, one of whom was dressed like the pope.

The El Paso chapter of the Neocatechumenal Way traveled more than 2,000 miles to see the pope and to support the Catholic Church and families. About 50 of the 80 group members visited the White House before catching a plane home.

The group landed in New York on Friday and took a bus to Philadelphia for papal events Saturday and Sunday. There, they attended a vocational meeting with members of the group and the main founder of the worldwide Neocatechumenal Way.

The Neocatechumenal Way supports adults in their ongoing education in faith and strongly supports families.

The group arrived in Washington at 9 a.m. on Sept. 29 for a tour of the Capitol and a meeting with Rep. Beto O’Rourke, the Democrat who represents El Paso in Congress.

The group was all smiles as they walked up Pennsylvania Avenue toward the White House for a quick look and photos. They caught a 3 p.m. flight to El Paso.

The cross country trip was something that Zapata knew would be a financial burden on many, so she worked to get inexpensive air fares. The total cost of the trip was $625, excluding some meals and souvenirs. Three families opted to drive the nearly 4,400-mile round trip.

Zapata said that her family’s experience was once in a lifetime.

“We thought it was really important to put things aside and to put money towards this. We decided as a family that it was important to come and show our support for the family,” she said. “We feel that the family is the foundation of America and everything. It is where our next generation grows and becomes good citizens.”