Change at quarterback will bode well for remainder of the season 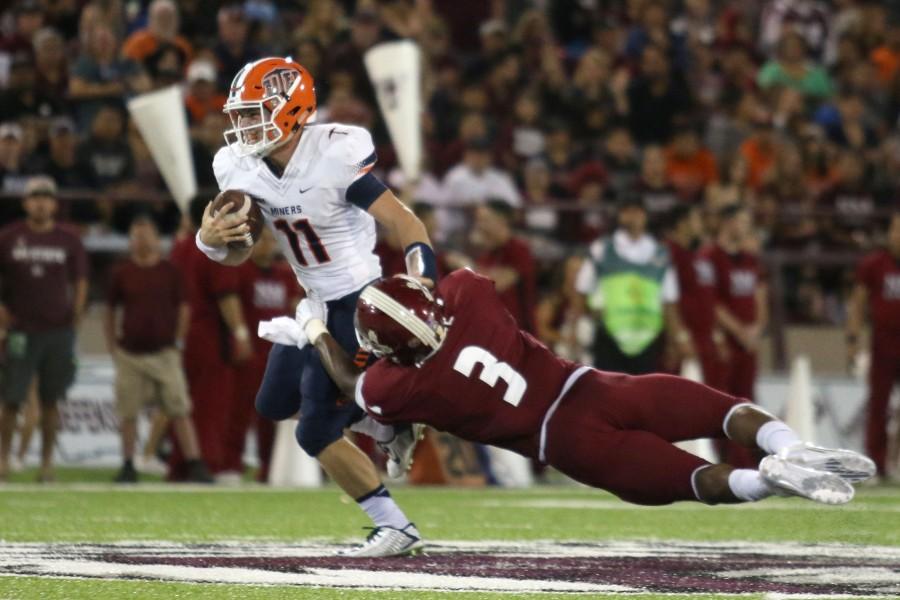 unior quaterback Mack Leftwich left last Saturday’s game against NMSU in Las Cruces mid-way through the third quarter due to a severe concussion.

Change is hard. Sometimes we ignore our faults or shortcomings and only change as a result of our mistakes. Then there are other times when the solution is staring you right in the face.

That is the state of the UTEP football team right now–the solution is staring them right in the face. That solution is Ryan Metz and a more up-tempo offense.

In the Sean Kugler era, the Miners have adopted a hard-nosed, run-oriented offense. And to some degree it has worked.

The Miners had their first winning season since 2005 last season and they were second in the nation with time of possession. Running back Aaron Jones greatly benefited from this system even though two of his three seasons with the Miners have been prematurely cut short due to injuries.

But the Miners’ 50-47 overtime win over New Mexico State this past Saturday shows that this team needs a change. With Ryan Metz in charge of the Miners’ offense for nearly two full quarters, the possibilities for a better offense were endless.

Under a pass-oriented offense, the Miners have the chance to still be a decent team this season, with or without Aaron Jones. On Monday, coach Kugler named Metz the starter for their home opener against Incarnate Word.

Metz is the right choice, whether Kugler wants him leading the Miners’ offense or not. Mack Leftwich, who suffered a vicious hit against the Aggies, is under concussion protocol and could be out for some time.

Metz will be the starting quarterback indefinitely, but the job should be his for the rest of the season.

If the combination of Leftwich managing the game and Kavika Johnson running the wild cat comes back in some form, the Miners will be a below average team.

The heavy run formations and short passing game is not good enough to make for what has been an atrocious UTEP defense through three games. The Miners are giving up 54.7 points per game on defense, which ranks dead last in the nation out of 128 Division One schools.

The  defense’s biggest problem is that they cannot stop any type of offense. They are bad against both passing and running-oriented teams. They struggle against spread offense, the option, play action, etc.

Part of it has to do with their depleted secondary, but the Miners consistently give up big play after big play to a nauseating degree. If the Miners’ defense has one thing going for them, it’s that they make timely stops.

You could argue that pivotal stops late in the fourth quarter by the defense were just as important as the Miners success on offense. Nevertheless the Miners still gave up 47 points and 541 total yards.

If the Miners can monopolize the clock, then they are in good shape. But the Miners have been blown out plenty of times even when they win the time of possession battle, which shows that this line of thinking is not the best.

The combination of Darrin Laufasa and LaQuintus Dowell in the backfield against the Aggies was solid, as both combined for 161 rushing yards on 19 attempts, with two touchdowns. But the probability of either of those players putting up numbers like that week in and week out is unlikely.

Former UTEP head coach, Mike Price, had atrocious defenses throughout his nine years in El Paso, but his teams were still competitive with a pass-heavy offense. In fact you could argue that Price’s offensive scheme was the only reason why the Miners had success.

Which is why a case can be made to revamp the offense and center it around Metz. To be fair it might be a little premature to anoint Metz as the savior of this offense. He picked apart a feeble NMSU secondary and has yet to play against a legitimate defense.

The risk of being premature with Metz is a far more viable option then going back to past.

Leftwich fits the current system, he manages the game, limits turnovers, and most importantly, hands the ball off. But with no legitimate playmaker in the backfield, things will get hairy.

With Leftwich under center, defenses can stack the box and eliminate any type of running game that the Miners try to impose. Having a predictable running attack on first and second downs leads to third and longs.

And passing the ball down the field is not Leftwich’s forte. His 5-feet, 9-inch frame is not what you would call ideal for a passing quarterback. Although during summer camp in Ruidoso, Leftwich had balls batted down at the line of scrimmage.

The 6-feet, 4-inch Metz does not have that problem. And Metz can make throws Leftwich would never attempt.

Also unknown to most is the athleticism of Metz. The redshirt freshman was also a track and field star at Andress High School; winning the district title in the 400-meter dash in 2011. Wildcat quarterback Kavika Johnson is the better runner, but Metz’ ability to move the ball vertically combined with his mobility is superior to any other quarterback on the Miners’ roster.

On one particular throw Metz found sophomore receiver Tyler Batson running a streak down the sideline for 30-yards and put the throw on a dime. Garrett Simpson might be able to make that throw, but Johnson and Leftwich do not have those types of throws in their arsenal.

Not to backtrack, but the Miners do not need to turn into a high-powered spread offense. They simply just need to integrate more vertical passing into their offense. The Miners still have a decent running game, but they still need to find a way to exploit the talents of Metz come this Saturday.