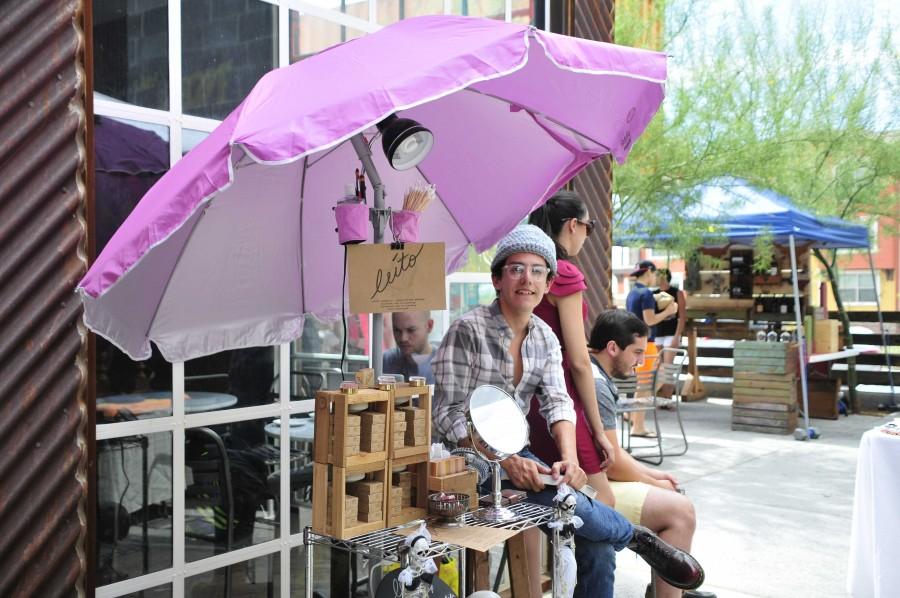 TI:ME at Montecillo hosted their monthly farmer’s market on Sunday, Sept. 13, and drew in vendors from all over town. They sold a wide variety of things such as homemade makeup, fizzy bath bombs and food. Vendors had tables set up throughout the square, while people ate at nearby restaurants such as Cantina Malolam or relaxed at the Mother of Pearl Records Store and Hillside Coffee and Donut Co.

Julia Cipriano, designer and owner of Of The Earth Beads & Jewelry, specializes in artisan gemstone jewelry. Her table featured jewelry with skulls and carved stones and ranged from bracelets and earrings to necklaces and charms. Cipriano has used her jewelry-making skills as a way to make a living since she quit working the traditional 9 to 5 job in 1995.

Cipriano decided to stop selling jewelry for other people and started doing something for herself.

“When I moved again, I reinvented myself and I started teaching yoga, which I still do,” Cipriano said. “I started making jewelry when I was a kid. I was always busy with my hands, and when I moved here in 2005, there was a bead shop on the way to dropping my daughter off at school and I stopped and bought some beads, and that’s really how it all started.”

Cipriano said she would rather be a vendor than own a business because it provides her with more freedom and mobility.

“I don’t have to worry about paying rent, which really keeps you tied down,” Cipriano said. “When I go back home to Detroit or when I travel, I take my store with me and find ways to sell wherever I go.”

As a vendor, Cipriano said she’d continue to sell and expand her horizons as a jewelry maker.

“As long as I stay true to myself, I will always be inspired and motivated to get up and do something,” Cipriano said.

Lolly Rancich, a hat and headband maker, said she opts to be a vendor rather wthan a business owner because her sales are better.

“My work is very seasonal, so it’s better to sell at events like these,” Rancich said.

Rancich’s sister taught her how to crochet, and she’s been in business for many years. Rancich’s work has been featured in shows in Albuquerque and Las Vegas, and was showcased in Fashion Week Magazine in 2012. In addition to crocheted hats, she also makes flower crowns out of real flowers.

“The flowers are dried, so you can wear them year round,” Rancich said.

Another unique vendor was Leito Makeup, a young man who creates his own makeup from scratch. Although he’s been in the business for only a year, Leito has already developed a strong following for his uniquely made makeup.

“It’s like making fondue or chocolate sauce,” Leito said. “It looks buttery and delicious, but it’s FDA approved makeup that you can wear either on your cheeks or as eye shadow.”

Leito said he hopes to one day start up his own makeup business here on the border.

“I’d like to become my own brand,” Leito said. “But I’d like to be attached to the whole experience and culture of El Paso rather than like one of those corporations.”

The Farmer’s Market at TI:ME at Montecillo takes place once a month. For more information, visit their Facebook page or call 915-474-3453.