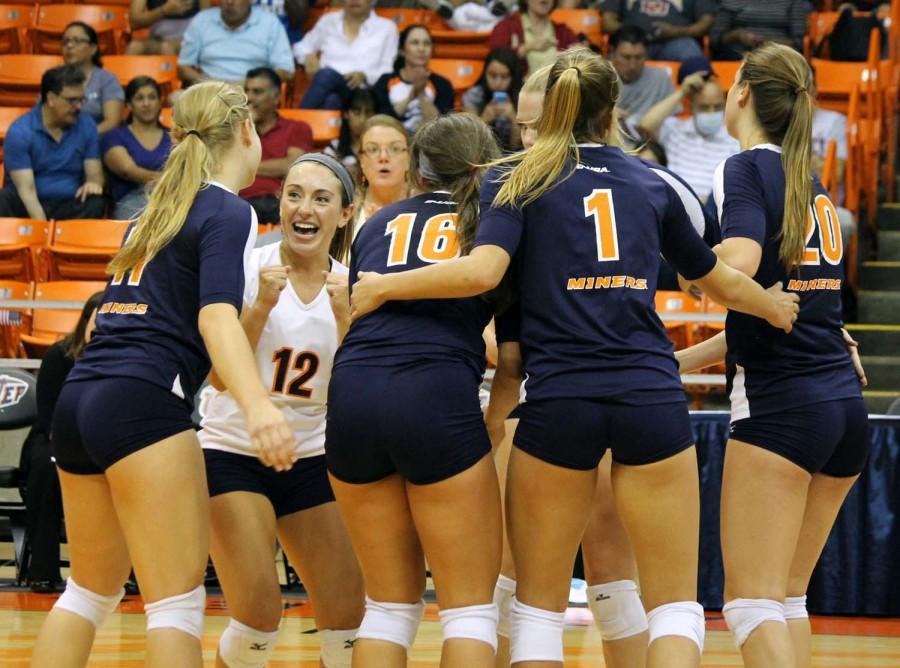 After playing their first six matches on the road to start the season the Miners opened their lone home Invitational against a impressive Denver squad. The Pioneers came into El Paso with a four match-winning streak after winning their home Invitational—The Pioneer Classic.

Despite the loss in front of the home crowd, the Borderland Invitational opening match was a highly contested battle, which showed an admirable fight from the Miners.

“I’m proud of how our team pushed back,” said junior setter Lindsay Larson. “Being down after the first set and down nine points [in the second set]. It’s pretty commendable but I think that we have to take it to the next level and push all the way through to the end.”

The Pioneers did not waste much time to start the match, after a relatively close start the Pioneers took control of the match with a 7-0 run that led to an eight-point lead. It was a strong start from the Miners but a lack of consistency and two service errors by sophomore Dalainee Perry at crucial times helped the Pioneers control the first set.

The Miners saved three set points to make the score line respectable, but the Pioneers closed the set out with a kill.

The inconsistent play that put the Miners in a hole in the first set continued over to the second set. The Pioneers jumped out to a 9-1 lead before the Miners responded with a run over their own. But every time the Miners went on a run the Pioneers countered with an even bigger run.

Down a set and 18-10 it looked like it would be easy work for the Pioneers heading into halftime, but the Miners displayed great heart and made their best comeback of the season. Slowly but surely the lead kept dwindling down and the Miners were back in the match.

At one point the Miners scored eight points unanswered before the Pioneers stopped the bleeding. With the crowd at it’s loudest the Miners took the second set by a staggering 16-4 run. UTEP head coach Holly Watts attributed the comeback to great defense.

“[We did it] with some digs,” Watts said. “When our defense gets going that makes our offense more confident. Our defense did a great job.”

Coming out of half time the third set was in a deadlock. A match high four lead changes put both teams even at 17-17. Then out of nowhere the Pioneers went on an 8-1 run to steal the set.

Fortunately for the Miners their end of third set blunder did not carry over to the critical fourth set. The Miners jumped out to an early 7-3 and did not look back. With a 18-11 lead and a inevitable fifth set in hand things got shaky for the Orange and Blue.

The Pioneers crawled back into the set and eventually tied things up just like the Miners did previously in the second set. The Miners never saw themselves down match point, but the Pioneers saved two set points.

With the set knotted up at 25-25, junior setter Lindsay Larson came up with a crucial dump shot to give the Miners their third set point, and the third set point was enough to push the match to five sets.

Amidst the struggle to close the Pioneers out in the fourth set, coach Watts took two timeouts late in the set, trying anything to break the rhythm and extend the match.

“We were just trying to stop them anyway possible,” Watts said. “I tried to let them stop it on the court, then I tried to help out with the timeouts to disrupt the rhythm of the other team. [But] we finally pushed through.”

In the fifth set it was a back-and-forth, then similar to the third set the Pioneers bolted to the finish line with an 8-2 run. A combination of the Pioneers efficient offense and the Miners wilting defense led to the quick finish. The Pioneers had 11 kills and just one error in the fifth set.

An improvement from last season’s quick loss to the Pioneers, senior outside hitter Talia Jones feels that her team did put enough good points together at the end of the match.

“We played this team last year and it was a quick three [sets],” Jones said. “So coming back and fighting to five [sets] that was big. But we need to piece it together those last couple of points.”

It’s a quick turnaround for the Miners as the Orange and Blue will play a double header tomorrow. The Miners have an 11:00 a.m. start against Brown University before a 7:00 p.m. nightcap against Robert Morris.

“We want to find a way to take advantage [of our home court] and win some matches tomorrow,” Watts said. “I think we can learn a lot from tonight and take away a lot of good things from tonight. We pushed through, won some sets, and fought really hard.”