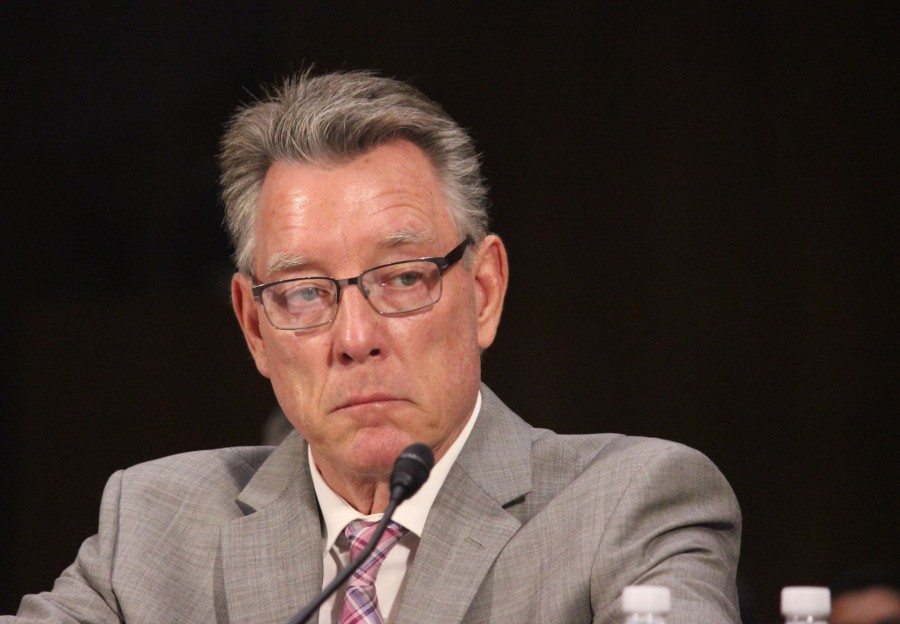 Jim Steinle, father of the San Francisco woman who was killed by an undocumented immigrant, tells the Senate Judiciary Committee hearing on Tuesday that Congress should pass a law imposing a mandatory minimum five-year prison sentence for anyone caught illegally re-entering the country a second time.

WASHINGTON – Senate Republicans blamed the Obama administration’s immigration policies for murders committed by immigrants who crossed the U.S.-Mexican border illegally.
They also pushed for new laws that would cut federal funding to local law-enforcement agencies that do not report undocumented immigrants during criminal investigations. The topic was addressed Tuesday, July 21. during a Senate Judiciary Committee hearing.
The topic of illegal immigration gained new prominence after a San Francisco woman, Kathryn Steinle, was shot to death. The suspect is a man who has been deported five times and has several felony convictions.
Jim Steinle, Kathryn’s father, asked committee members to pass stricter immigration laws.
“Unfortunately, due to unjointed laws and basic incompetence of the government, the U.S. has suffered a self-inflicted wound in the murder of our daughter by the hand of a person that should have never been on the streets in this country,” Steinle said.
Five of the 10 witnesses the Senate committee head from were family members of people who had been killed by immigrants without documents — all five criticized current immigration law and asked for new laws.
“We will honor Josh, Kate, Dennis, Danny, Grant, and many others whose lives were tragically cut short because of this administration’s lax immigration policies,” Sen. Chuck Grassley, R-Iowa, said during the hearing. Many of the proposed laws are named after these victims.
For example, Kate’s Law would create a mandatory minimum five-year prison sentence for anyone caught illegally entering the United States a second time.
Another bill would require city and state law-enforcement officials to notify federal authorities of any immigrants who may be eligible for deportation.
San Francisco declared itself a sanctuary city in 1989.
J. Thomas Manger, president of the Major Cities Chiefs Association and chief of police for Montgomery County Md., warned against laws that might try to punish police departments by taking money away from them.
“Immigration enforcement is a federal responsibility. It is and always has been. Local agencies cannot be expected to take on these additional duties,” Manger said. “The decision to have local law enforcement to perform the duties of federal immigration agents should be left to local government. It should not be forced on them by the threat sanctions or the threat of withholding of existing police assistant funding.”

Manger said local law-enforcement agencies could lose the trust of the people they are sworn to protect if they start checking for immigration status.
This sentiment was echoed by Grace Huang, coordinator for the Washington State Coalition Against Domestic Violence.
She warned that immigrants who are victims of crime will avoid police if local law enforcement is forced to act like border patrol officers — allowing criminals to go unreported.
“When immigrants are afraid to come forward with information about a crime, the entire community is less safe,” Huang said.
In March, Sarah Saldaña, director of Immigration and Customs Enforcement, said that she would support requirements that local law enforcement hold immigrants for ICE.
However, she backedpeddled from that statement the following day.
Sen. Ted Cruz, R-Texas, suggested that it was Obama administration insiders who forced her to change her answer.
Cruz, who is campaigning for the Republican nomination for president, accused the Obama administration of protecting criminals and refusing to follow federal law.
“If President Obama had the courage of his convictions, he would come look in the eyes of these men and women who lost their sons, daughters, mothers and sisters, and the administration would stop releasing murders and rapists,” Cruz said.
Cruz is one of the few Republican candidates for president who has not condemned Donald Trump’s comment that many Mexican immigrants are rapists.
Laura Wilkerson, mother of Josh Wilkerson who was killed five years ago by an undocumented immigrant, said she’s been working toward changing the laws since her son died. She thanked Trump “for getting the message out.”