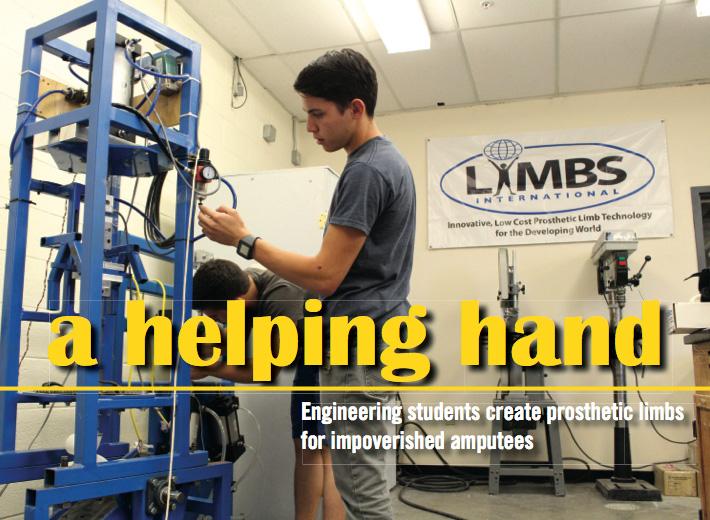 Since its development in 2003, LIMBS, an international nonprofit organization headquartered at UTEP, has been working with students to develop low-cost innovative prosthetic devices for impoverished amputees.

According to the organization’s website, LIMBS International is dedicated to restoring mobility to the more than 11 million amputees around the world by engineering low-cost, highly-functional, sustainable prosthetic solutions, while empowering students and communities.

Roger Gonzalez, UTEP professor and chair of the engineering education and leadership program, who is also the CEO and founder of LIMBS, said the organization provides a significant gateway for students to share their ideas and research with other LIMBS research teams across the U.S.

“This gives college students and professionals who study in a variety of fields the opportunity to expand on their findings and continue to develop in clinical, technical, and engineering research, which can have a positive and life-changing experience,” Gonzalez said.

A key aspect of LIMBS’ mission is for participants to focus on affordable and sustainable prosthetics that would benefit amputees in developing countries. This mission allows UTEP students to contribute to the project by working on the design of different components while trying to discover better ways to manufacture prosthetic feet, arms and ankles and make them less expensive for patients.

According to LIMBS International, there are nearly 11 million amputees in developing nations who need a prosthetic limb, but they cannot afford to purchase one or have the resources to maintain it once they have it.

By providing students with an opportunity to expand and contribute to the development of future Modular Prosthetic Limbs and Orthotic Technologies, LIMBS’ goal of assisting 80 percent of the approximately 11 million of amputees may be achieved.

Pablo Servin, sophomore major in the engineering leadership program, said he first got involved with the program when he heard about it from his friend while he was majoring in mechanical engineering. He then became inspired to switch majors and plans to continue his education upon receiving his bachelor’s degree and getting a master’s degree in the biomedical field.

“This really opened my eyes to all the possibilities and opportunities that are out there for me to be a part of,” Servin said. “It gave me hands-on experience and a chance to help people with our work.”

For the millions of people living in extreme poverty, the majority of prosthetic devices are excessively expensive.

“Because a LIMBS knee can be created with simple tools and locally obtainable materials, even in third-world countries, it often costs much less than $100 to make,” Servin said.

LIMBS is currently located within the university’s Biomedical Engineering Building, which they utilize to expand the amount of research and development they are focusing on their projects.

The organization has also established training centers and clinics in other parts of the world including Kenya, India, Ecuador, Bangladesh, Senegal, Ecuador, Bolivia, the Dominican Republic and Haiti.

Gonzalez has traveled to poverty-stricken parts of the world and has witnessed how difficult it can be for poor individuals to have access to prosthetics.

“Our mission is to impact those who have no financial means to cover the costs associated with receiving a long-term, sustainable limb because those are the people who get left behind,” Gonzalez said.