UTEP looks for revenge after controversy 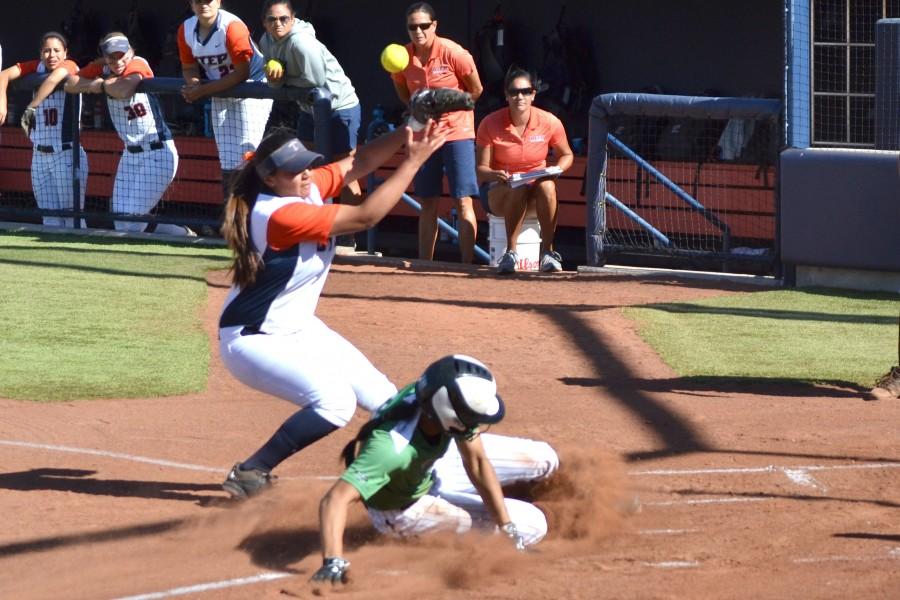 The UTEP softball team lost the final of three games against Marshall, even though the game was stopped early and the score was tied at seven.

Heading into this Tuesday’s doubleheader with New Mexico State, the story line was already set up.

The UTEP softball team had one very bad inning in Las Cruces and wound up losing 12-6 in March. The Miners are now seeking revenge in their last home games of the season, when the hated Aggies head down I-10 and into the Helen of Troy Softball Complex.

On Saturday, the Thundering Herd and the Miners split a doubleheader, which allowed UTEP to head into Sunday’s matchup with a half-game lead on North Texas and Charlotte in the Conference USA standings. UTEP was barely in the C-USA tournament in eighth place when controversy during Sunday’s game looked like it could dash their hopes altogether.

The UTEP-Marshall rubber match was called in the seventh inning while UTEP had the bases loaded and slugger Kawehiokalani Netane was at the plate.

Marshall, knowing that the game would be stopped promptly at 2:30 p.m., made two pitching changes while Netane waited. The delay in the game caused the umpires to end the game with both teams tied 7-7.

Prior to conference officials ruling on the outcome of the game, Miner head coach Tobin Echo-Hawk was happy with the fight that her team showed in the final inning.

“I don’t lose my cool very often, but I got close today,” Echo-Hawk said. “It was great that we came back in the seventh, though. We kept fighting. It was a good weekend against a great team.”

On Monday morning, C-USA ruled that the score would revert back to the last full inning played, giving the Miners a 7-4 loss.

Echo-Hawk was unable to be reached for comment on Monday and was reported to have likely been on the phone with C-USA officials for much of the day.

Luckily for the Miners, the other teams in the tournament chase did not fare well either, and they ended the weekend still a half game up in the tournament hunt. The team will need to win two of the three games at North Texas next weekend in order to secure their first tournament berth since 2010.

Always upbeat senior outfielder Ashley Eldridge is ready to move past the controversial ending and on to Denton.

“I think we just need to work hard next week and get two wins at North Texas,” Eldridge said. “We’ll be all right.”

In the meantime, there is some unfinished business to be taken care of. Whether UTEP sees maroon and white or Marshall’s green and white while they attempt to punish the Aggies remains to be seen.

Revenge can take a team a long way, but Tuesday’s doubleheader will be a tall test regardless. Since the two teams last met, NMSU has only gotten better.

The Aggies (40-13) went 14-1 on their way to securing another Western Athletic Conference championship. The power-hitting Aggies have scored 389 runs in 53 games. The Aggies are led by slugging infielder Fiana Finau, who comes into Tuesday’s series with 21 home runs and 63 RBIs.

If there is a glimmer of hope to be had by the Miners—apart from revenge—it is that the team’s pitching has improved dramatically since the first meeting with the Aggies.

Sophomore pitcher Kaitlin Fifield has lowered her earned run average seemingly every game since the beginning of April. The Chapin High School grad currently has a 3.98 ERA and is holding opposing batters to a .292 average. Fifield and most likely fellow sophomore pitcher Erika Harrawood will be tasked with containing the Aggies’ potent offense.

It may be hard for the team not to look ahead to next weekend’s all-important road series, but revenge can be pretty sweet, too.