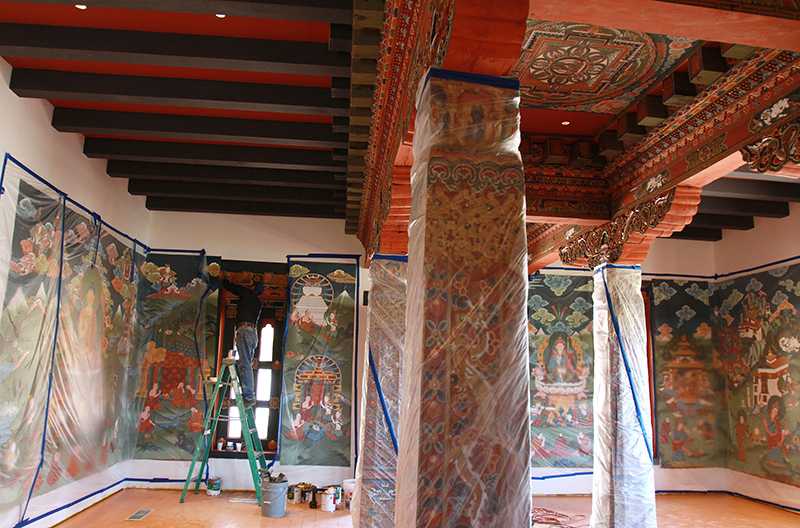 What: UTEP President Diana Natalicio will celebrate the grand opening of UTEP’s Centennial Plaza and Lhakhang cultural center with the community during an open house.

Where: Centennial Plaza in the heart of campus

The University of Texas at El Paso invites the community to celebrate the grand opening of its Centennial Plaza and Lhakhang cultural center starting at 10 a.m. Saturday, April 18, in the center of campus.

The free public event will begin with remarks from University President Diana Natalicio and the Honorable Kunzang C. Namgyel, Bhutanese ambassador to the United Nations.

The open, pedestrian-friendly plaza is the centerpiece of the University’s Campus Transformation plan. The 11-acre site incorporates arroyos, drought-resistant vegetation, rock structures and a natural amphitheater, and will give people shaded places to relax, socialize and collaborate.

There also will be tours of the intricately hand-carved, hand-painted Lhakhang, which the people of Bhutan gave to the people of the United States in 2008 with the request that it be permanently installed at UTEP. The Lhakhang was part of Bhutan’s presentation during the Smithsonian Institution’s Folklife Festival in Washington, D.C.  The building’s interior is full of beautiful hand-painted images and statues that tell a story important to the history of Bhutan.

After the open house, the Lhakhang tours will be by appointment only.

The University also has scheduled an open house where representatives from different University programs and academic departments will set up around the perimeter of the plaza and showcase their work. This is an excellent opportunity for prospective students and their families to visit the campus, start conversations about possible majors and get a sense of campus life.

Refreshments and live music from UTEP’s commercial music majors will be part of the celebration. Some popular food truck vendors also will be there.

Free parking is available in the Sun Bowl Parking Garage and ADA parking will be available around University Avenue and Wiggins Road.

UTEP’s annual Honors Convocation will be held at 2 p.m., April 19 at Magoffin Auditorium. The event celebrates the achievements of outstanding students, faculty and staff.

A reception will be held immediately following the event in the Centennial Plaza.

Sixteen talented high school seniors have been awarded a Terry Scholarship, becoming the first class of Terry Scholars at The University of Texas at El Paso.

“We are overjoyed with the outstanding students selected to be Terry Scholars at UTEP,” said Gary Edens, Ed.D., vice president for student affairs. “Each of them brings to the UTEP campus strong academic and leadership backgrounds.”

The scholarships are due to the generous support of the Terry Foundation, whose goal is to improve and develop the state of Texas by supporting students to attend the state’s finest public universities. The foundation hopes selected scholars will have a significant impact on the future leadership of the state and nation.

UTEP’s 16 Terry Scholars will receive full coverage for their tuition, fees, books and living expenses. Recipients also have the opportunity to request additional funding for a study abroad semester. The scholarship will renew annually, for up to eight semesters, for students who meet its strict scholastic requirements.

“The Terry Scholarship is a very competitive award that promotes campus involvement and high academic achievement,” Edens said. “I can’t wait to see the amazing contributions these Terry Scholars will make at UTEP over the next four years.”