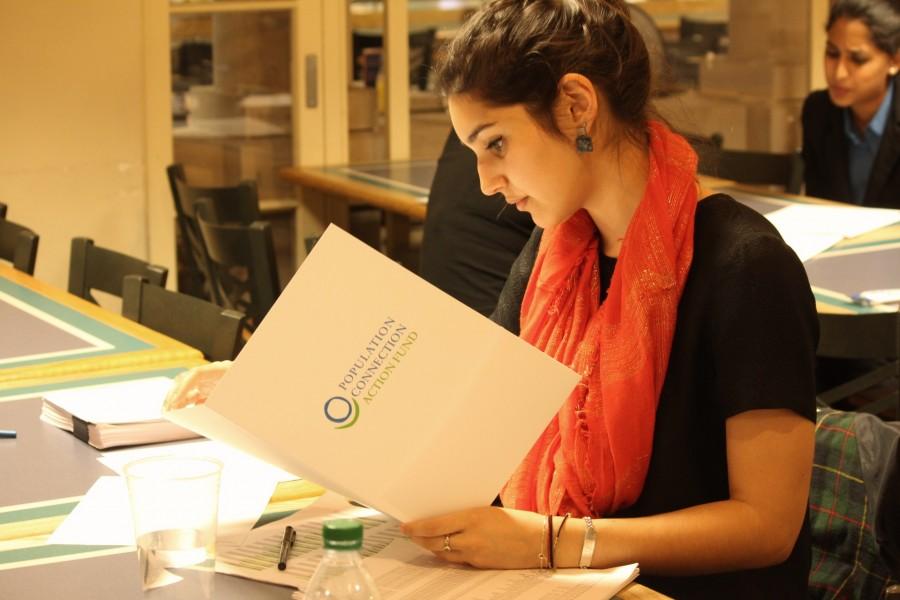 Christina Ospina, of Population Connection, is one of about 200 lobbyists who met with members of Congress on Monday to encourage them to repeal the Global Gag Rule, which prohibits funding for international aid groups that advocate family planning or performs abortions. SHFWire photo by Jose Soto.

Population Connection, which specializes in population stabilization and works with federal policymakers to improve international family planning, sponsored a four-dayevent to lobby in favor of changing these policies. More than 200 activists from 30 states – mostly college students – visited members of Congress on Monday and Tuesday.

Christina Ospina, field and outreach assistant for Population Connection, said the group wants Congress to support the Global Democracy Promotion Act, which would create a permanent repeal of the Global Gag Rule.

Family planning providers that didn’t agree to the rule also lost the donations of contraceptives. The U.S. is currently the largest donor of contraceptives to the developing world, according to Population Connection.

“We’re not only lobbying for the Democracy Promotion Act, but we want the nation to raise its international funding for sexual health and education to $1 billion,” Ospina said.

The law would send $65 million to the United Nations Foundation.

The group also wants revisions to the Helms Amendment.

Enacted in 1973, the Helms Amendment states that no foreign assistance funds, mostly from the U.S. Agency for International Development, may be used to pay for abortions as a method of family planning or encourage anyone to perform abortions.

The Helms Amendment differs from the Global Gag Act because it prohibits U.S. money to be used for abortions. The Global Gag Act also withdraws U.S. funding if the organization uses other funds to finance abortion practices.

Jim Sedlak, vice president of American Life League, said the organization was “instrumental in adapting the Mexico City Policy and is totally against any repealing of such laws.”

“We see the Global Democracy Promotion Act as a violation of the rights of Americans,” Sedlak said. “Abortion is not widely supported here in the states, and having taxpayers’ money go toward something they don’t support isn’t right. Besides, we are imposing our own views on abortion onto other countries that perhaps don’t support abortion themselves.”

USAID attempts to prevent abortions, especially illegal ones, by helping foreign organizations educate women about proper contraceptive use and to empower them to make their own decisions about how many children they want and when to have them.

Caitlin Horrigan, associate director of global advocacy for Planned Parenthood Federation of America, said the Helms Amendment is “restricting women in some of the poorest countries in the world.”

“For more than 40 years, it has restricted woman from accessing vital, lifesaving health care they need,” Horrigan said.

The current interpretation of the amendment is more restrictive than required by law, Horrigan said.

“It prohibits funding for all abortion, even in cases of rape and incest when the life of the woman is in danger and even in countries where abortion is legal in these circumstances,” Horrigan said.

Saul Pandey, 25, a pharmacy student at the University of Charleston, is originally from Nepal, where some woman have no understanding of contraceptives.

“Women in Nepal sometimes have up to 10 kids,” Pandey said. “What I lobbied most for was the distribution of contraceptives in Nepal and other developing countries. If we educate both women and men on how to have protected sex, then we won’t have such a big abortion issue.”