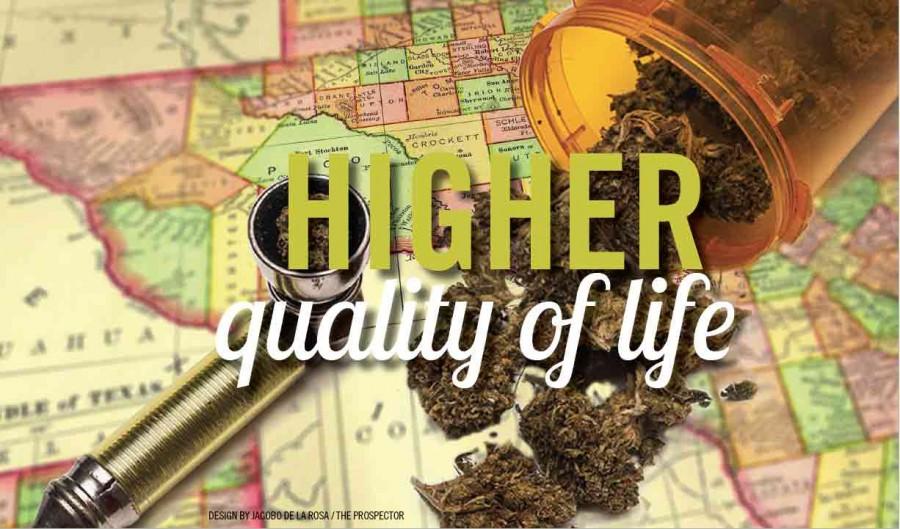 It was a regular Sunday evening for Daniel Gonzalez, until his friend took a wrong turn and they got stopped by a cop. His friend got a DUI, but Gonzalez got arrested for being in possession of two marijuana joints and drug paraphernalia and was sent to jail.

“Being in the same jail cell with a rapist and a thief, that’s not right,” Gonzalez said. “I’m not hurting anybody, you know?”

Gonzalez, a sophomore communication major, was arrested and sent to jail. It was his third time getting charged for possession of marijuana, and under Texas law that’s a felony. He was able to get a good lawyer, who got his charge dropped from a felony to a class B misdemeanor, allowing him to attend UTEP.

A new bill introduced into the Texas legislature could help people in his situation in the future.

The bill authored by Texas representative Joe Moody, D-El Paso, would decriminalize marijuana by making possession of one ounce or less of marijuana a class B misdemeanor and subject to a $100 citation, removing the possibility of arrest, jail time and a criminal record.

“HB 507 will push forward to helping people like myself to stay out of jail, and it’s just a waste of money putting me in jail, putting me in the court system,” Gonzalez said.

Currently in Texas, possession of two ounces or less of marijuana is considered a class A misdemeanor punishable by up to 180 days in jail and a $2,000 fine.

Ellic Sahualla, chief of staff and general counsel for Rep. Moody, said there are 70,000 arrests for marijuana every year in Texas, which costs $734 million each year.

“What we do get are people—mostly young people—being convicted of drug offenses,” Sahualla said in an e-mail. “Those convictions give them a permanent criminal record that can lead to financial aid for school being pulled, loss or denial of jobs or housing…and even deportation. Good government means laws that lead to smart, fair outcomes in a cost-effective way.”

The 2013 Texas Crime Report by the Texas Department of Public Safety states that the number of arrests for drug possession in 2013 was 123,483—marijuana possession comprised 57 percent of drug arrests. Out of those arrests, the 20-24 age group had the highest amount of arrests.

“It’s not stopping individuals from doing it, all it does is create a burden for the system,” said Dr. Mary Cuadrado, chair and assistant professor of the Department of Criminal Justice. “The only reason it’s a crime is because we have defined it as such.”

Figures from the El Paso District Attorney’s office reveal that 4,752 cases were processed between 2013 and 2014 for possession of less than two ounces of marijuana.

A report on marijuana by the ACLU in 2010 showed that nationwide the white arrest rate was 192 per 100,000 whites and the black arrest rate was 716 per 100,000 blacks, indicating that racial disparities exist nationwide regardless of household income level. However, marijuana use is roughly the same among blacks and whites. In 2010, 14 percent of blacks and 12 percent of whites reported using marijuana.

“There’s clearly some kind of bias and how we’re enforcing these laws, and if we want to actually have real justice in our country, we need to change these laws so they’re not disproportionately affecting certain demographics of our community,” said Hunter James White, communications director for Republicans Against Marijuana Prohibition.

HB 507 is one of 13 bill’s related to marijuana that have been introduced into the state legislature, including HB 2167 by state representative David Simpson, R-Longview, which would remove language from Texas statutes relating to marijuana so it wouldn’t be considered a crime.

“It is a bipartisan issue certainly amongst the younger generation of Republicans and Democrats, the views on marijuana have very clearly changed,” White said.

A poll conducted by the 2013 survey by Public Policy Polling, revealed that 61 percent of Texas would support decriminalization.

“Many Republicans hold the idea that the government should interfere as little as possible in a person’s life. Nothing says interfering with someone’s life like telling you what you can or can’t put into your body,” White said.

“That’s why we have a high following of Republicans within this movement, because it is a right and they’re starting to notice it,” he said. “People believe that everybody that smokes cannabis is a loser that lives on their mom’s couch and that’s all they do is smoke weed. There’s a lot of people, a lot of professionals, people like myself, we work really hard, we have our degrees, we’re the ones trying to lead this movement in a positive way.”

Perez is also a proponent of HB 2391, a Texas law passed in 2001 commonly known as cite and summons, which gives law enforcement officers the option of issuing citations rather than taking certain low-level offenders to jail. The bill was passed in order to reduce jail overcrowding and reduce court backlogs.

“There’s only two counties that have taken it right now, one of them is Travis County, the other one is Harris County. Here in El Paso, we’re working on that and hopefully we can get it up and running this year,” Perez said.

Low-level offenses would include things like possession of marijuana, graffiti, petty theft and DWI, among others.

However, El Paso NORML’s goal is full legalization, and Perez said that’s why HB 507 is important.

“In Colorado and Washington and a lot of those other places, you have a structure, so our structure is decriminalize, create a medical program and then full legalization, so that’s kind of the way that every other state has structured it,” he said.

There are two months left in the legislative session, whether HB 507 will get passed is up to legislators to decide.

“It’s so beneficial (HB 507), it’s about keeping innocent people out of jail,” said Gonzalez. “I’m having the best time of my life, but if I would ever have the choice to stop smoking I wouldn’t do it because it’s not a crime.”