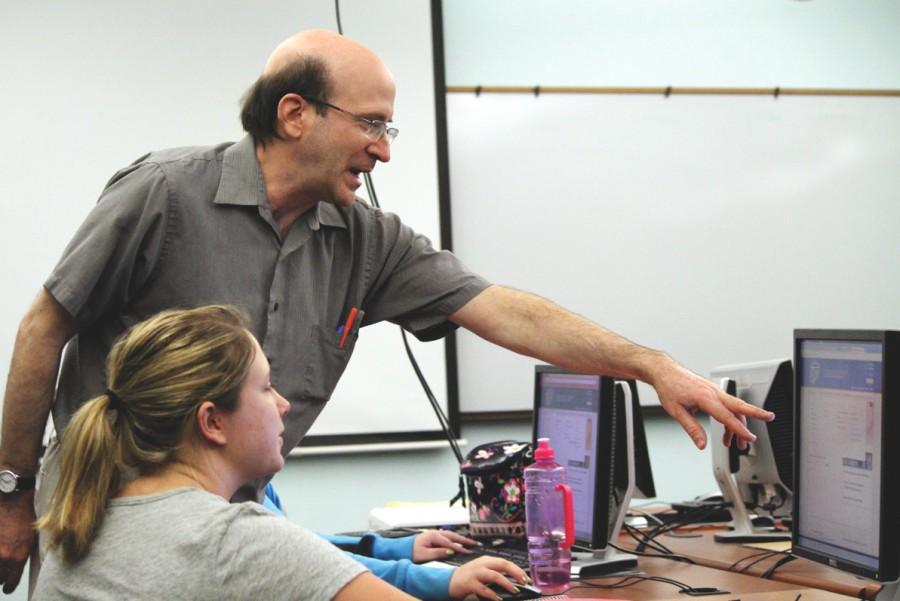 More than 100 contestants from around the world entered this year’s Pi Day song writing contest, a significant event held only once this century and a once-in-a-lifetime opportunity for a UTEP professor of 11 years.

Dr. Larry Lesser, UTEP mathematical sciences professor and interim director of the Center for Excellence in Teaching and Learning, was announced as the winner of this year’s Pi Day of the Century song-writing contest held by the New York City Museum of Mathematics.

Celebrated during the month of March, Pi Day represents the mathematical constant of Pi written as 3.14. What made this year special is that Pi day landed on March 14 of this year, which is the first five digits of Pi–3.14.15– which is the ratio of a circle’s circumference to its diameter.

“I felt extremely honored and happy to win a contest at a national level, especially one that is connected to a significant date,” Lesser said. “I’ve won a few local and regional songwriting contest awards, but winning this contest was very special.”

Out of about 100 math, statistics and education songs that he wrote, Lesser entered two of his songs into the contest, which were, “American Pi,” a parody of Don McLean’s No. 1 hit “American Pie,” and “Pi Will Go On,” a parody of Celine Dion’s hit song “My Heart Will Go On.”

Lesser first created “American Pi” as a parody in 1997,  while he was teaching a mathematics history course at the University of Northern Colorado.

“Since the first draft, I’ve made various fine-tuning improvements, but contests and concerts are great motivators to do that polishing,” Lesser said.

While teaching at Southwestern University in 1992, Lesser developed a math and music unit for a pre-calculus course that had a successful outcome among his students. Since then, he has continued gathering connections between his two passions.

In 2013, Lesser honored UTEP’s mission and its upcoming centennial year by recreating a new school song for the university. The new lyrics to the tune of Freddy Mercury’s, “We are the Champions” (a platinum hit for Queen) were created in an effort to capture UTEP’s unique essence.

“It was another few years later before I actually integrated math and songwriting that yielded even more response and engagement,” Lesser said. “So, I’ve been songwriting for over three decades (since college), and this has included two decades of writing math songs.”

In 2014, Lesser conducted an experiment at a university and a community college with different and diverse populations. Students were randomly selected to participate to see whether they did or did not understand material with statistics-fun added into the course management system.

“It is still being analyzed, but we found that students perform significantly better on exams,” Lesser said.  “The main way students have helped with the songs’ research is by transcribing interviews.”

His research relates to making statistics and mathematics more accessible to diverse populations and is supported by a current National Science Foundation grant, for which he is the principal investigator.

“It’s part of my toolbox to use a math song when I’m teaching a topic I have a song about,” Lesser said. “It’s obviously less than 1 percent of the instructional time, but that’s the 1 percent students remember best.”

A case study that will soon be published, which was recently conducted by Lesser and Dr. Rey Reyes, associate professor of teacher education, will show how the use of song and other engaging modalities in the college statistics classroom give a qualitative picture of the patterns of interaction and engagement.

With more than 60 math songs published in journals, Lesser was privileged to participate in a math-and-music episode for the KCOS-TV children’s educational show “Blast Beyond,” and he has published educational articles about using songs in math classes.

Lesser provides various workshops and keynotes that help teachers engage students, while in the classroom in an effort to help other teachers across the country and within the local community.

“I conduct mathematics education research in completely different areas, such as the roles of language, intuition, teacher knowledge and equity,” Lesser said. “Society is only increasing in how much we need to deal with data and diversity.”