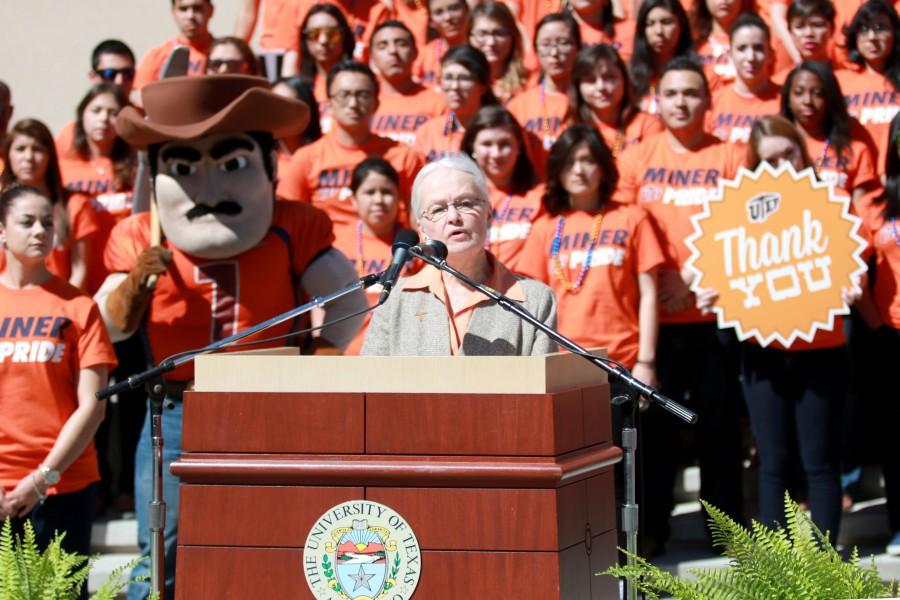 President Diana Natalicio announces the final $260 million raised from the Centennial campaign which began in 2007.

Cue the drum line, cue the cheers and the applause, UTEP once again has cause to celebrate. The university’s president, Dr. Diana Natalicio, announced UTEP’s Centennial Campaign results today outside the Undergraduate Learning Center in front of faculty, staff and students.

“I’m thrilled and very proud to share with you today the enormous success that we achieved in reaching our Centennial Campaign goals,” Natalicio said. “Not only did we meet our $200-million goal, but we’ve greatly exceeded it.

Back in September 2010, the university launched the public phase of the Centennial Campaign with the goal of fundraising a total of $200 million. Today, Dr. Natalicio, on behalf of UTEP, announced the campaign had been successful in raising more than $226 million.

According to Natalicio, there were more than 26,000 donors contributing over 124,000 gifts. Miner alumni were responsible for more than $49 million in donations, while those Natalicio called friends and supporters contributed $23 million.

Natalicio pointed to the faith and confidence of all of the donors involved as key to making a campaign as ambitious as this successful, even through tough economic times.

“There were a lot of people who predicted that we wouldn’t be able to reach our goal,” Natalicio said. “The fact that we greatly exceeded it, I think is a real tribute to the confidence that our alumni and our community and our supporters around the country and around the world have in the great progress UTEP has made over the past few years.”

The money raised during the last four years has already begun to benefit all areas and individuals involved with the university.

In a campaign like this one, the allocation of the money is dependent on the donors’ interests and input. The university works together with the donors in combining their interests with the needs of students, faculty and staff.

UTEP is still in the process of trying to achieve a tier-1 status with the idea of revolutionizing the face of higher education. The kind of support received through the Centennial Campaign reassures not only that the university is on the correct path, but also its students.

“It’s something to be truly grateful for,” said Robert Dominguez, junior biochemistry major and SGA president. “It means that in this family that we have started here at UTEP, they see us as an investment.”