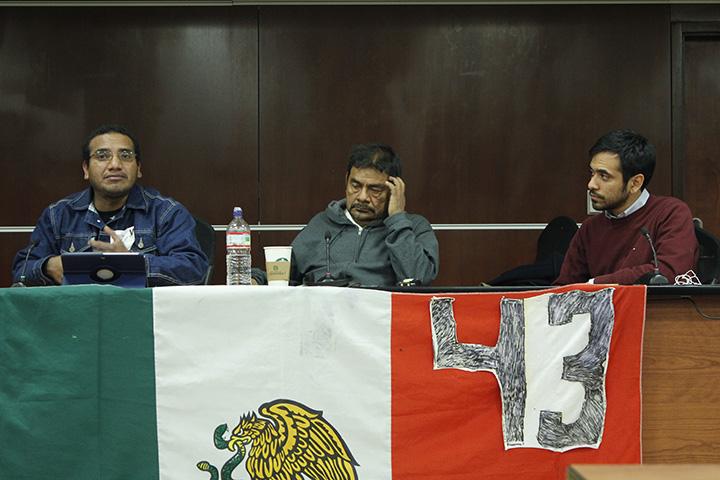 Vidulfo Rosales, public interest attorney for the state of Guerrero, left, and Felipe de la Cruz, professor at Raul Isidro Burgos Rural Teachers College in Ayotzinapa, brief journalists and students at the University of the District of Columbia of the missing 43 Mexican students. Cruz’s barely escaped the kidnapping.

WASHINGTON –  Spread across the floor of a room Monday evening was a hand-designed banner that read “U.S. puts the guns, Mexico puts the dead.” It implied that American-made guns contribute to the thousands of murders committed by drug cartels in Mexico.

Above it, a Mexican flag with the number 43 sown on the right-side corner was draped across a table. Two of the leading activists of one of Mexico’s most controversial human catastrophes sat at the table, advocating for truth and justice.

On Sept. 26, Mexican students from Raul Isidro Burgos Rural Teachers College in Ayotzinapa were en route to Iguala in the state of Guerrero. They planned to raise money to partake in a Mexico City demonstration.

But local police and military took over their bus. Twenty-five students were wounded in the attack, six were killed and 43 are missing.

Vidulfo Rosales, public interest attorney for the state of Guerrero, spoke to students and journalists at the gathering, held at the University of the District of Columbia.

Rosales said the way the Mexican government has handled the case sends a message.

“The message is intimidation,” Rosales said. “They want the Mexican people, especially students, to know that any expression of disagreement will be silenced.”

Rosales is part of Caravan 43, a tour bringing parents and colleagues of the students to the United States to express their outrage in a way they couldn’t in Mexico.

Salvador Sarmiento, 32, legislative affairs director for Caravan 43 and an activist, said the group wants the uninformed to know the story and for the American public to help.

The Mexican government has blamed the disappearance on drug cartels, saying local police handed the students over to the cartels, who then burned their bodies. However, when incinerated bodies were found in a dump site, DNA tests proved the bodies were not the students.

The Mexican government has closed the investigation.

“They were silenced. That’s why we are here, to express ourselves without being shut down,” Rosales said.

Caravan 43 is calling for the American government to uphold its agreement under theMerida Initiative, which binds the U.S. to aid Mexico’s fight against organized crime.

Rosales said that the American public could relate to a communal repression, comparing the students to the Ferguson case.

“The way Americans reacted to the case is exactly how we’re reacting to the missing students,” Rosales said. “The only difference is that the Mexican government is not conducting a proper investigation.

In December, however, Obama told Telemundo’s Jose Diaz-Balart that the U.S.  offered to help Mexico.

In November, Menendez and 14 other senators, wrote a letter to Secretary of State John Kerry urging hime to “strengthen the investigation.”

Felipe De la Cruz, a professor at the Ayotzinapa college, said the government “sees an educated community as a dangerous one.”

“This is why they try to defend themselves by silencing us,” Cruz said.

Cruz’s son Angel, 19, was on the bus and heard gunshots and frantic screams coming from his schoolmates. He ran to hide in a nearby clinic.

He reunited with his father the next day, “psychologically damaged” Cruz said.

Located in a farming community, the Ayotzinapa college is one of few that educates farmer’s children, like Angel.

“This is a disadvantage to a capitalist country,” Cruz said.

Caravan 43 hopes the students’ disappearance will transcend borders and language.

Conchita Hernandez, 29, a member of the caravan who teaches blind students in the D.C. schools, said her responsibility is to help as a native Mexican in Washington.

“I’m here in the nation’s capital where laws and initiatives are created,” Hernandez said. “American money is directly tied to Mexico. It’s our duty as Mexicans to help support this cause.”

The Caravan 43 group plans to demonstrate in Maryland and on Capitol Hill this week.

“All we want to do is create awareness,” Cruz said. “When the ones at the bottom start to move, the ones on top fall.”

Reach Reporter Jose Soto at [email protected] or at 202-408-1494. SHFWire stories are free to any news organization that gives the reporter a byline and credits the SHFWire. Like the Scripps Howard Foundation Wire interns on Facebook and follow us on Twitter.