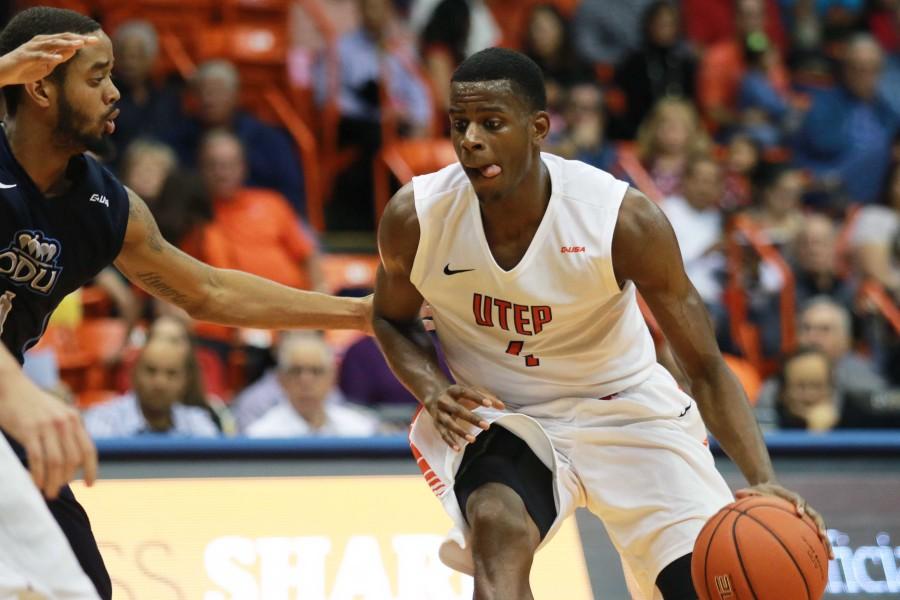 Senior guard Julian Washburn had a team high of 15 points.

It was a showdown between two of the best defenses in Conference USA and UTEP’s was just simply better. The Miners beat Old Dominion 62-47 tonight at the Don Haskins Center. The victory is UTEP’s sixth in a row and gives the Miners sole possession of second place in Conference USA, one game behind the leader Louisiana Tech.

Points were at a premium tonight with two teams that pride themselves on defending. It took more than eight minutes for a team to reach double digits on the scoreboard and over ten for both to reach that point.

With 9:40 left to play in the first half, the Miners had a slender 12-11 lead. Then, senior guard Julian Washburn hit a three, followed by an old fashioned three-point play from freshman guard Omega Harris. After two from Old Dominion, junior guard Earvin Morris hit a three, senior center Cedric Lang made some free throws and the Miners were on a 12-2 run and had their first double-digit lead of the night.

UTEP was not outstanding on the offensive end, shooting 38.5 percent from the field in the first half, but defensively they might have never played better. The Miners held Old Dominion to just 26.9 percent shooting from the field and no Monarch had more than four points going into the break.

“I think that’s probably the best defense we’ve played all year, to be honest,” said senior guard C.J. Cooper. “We just went out there tonight with great defensive intensity.”

A Washburn jumper as the buzzer rang sent the game into halftime with UTEP leading 28-19.

The second half saw more of the same, with the Miners limiting the visiting Monarchs all through out the final 20 minutes of play. Old Dominion improved their shooting slightly, to a still very unimpressive 34.6 percent, making their average for the game a dismal 30.8 percent.

UTEP held the comfortable cushion through out the second half pushing the lead all the way to 14, but with three minutes remaining in the game Old Dominion had somehow cut it down to just six. The score was 48-42 after a couple of Monarch free-throws but the Miners made sure that was as close as it would get. The UTEP defense forced a turnover and Washburn slammed it with authority to cap off a 14-5 run to end the game and seal the victory.

Washburn and Morris led the Miners in scoring, each with 15 points. Cooper was the only other Miner in double digits scoring 12 points in his 24 minutes.

As he usually does, Washburn set the tone defensively for Floyd’s team, taking on the opposition’s best player and shutting them down. Old Dominion’s Trey Freeman came into the game as the fourth best scorer in Conference USA, averaging 16 points per game. Tonight, guarded by Washburn, Freeman made three of his nine attempted shots for just six points—he did not attempt a single free throw either.

“I feel I did a pretty good job defensively,” Washburn said. “But I think the big dudes did a great job of helping me…I give a lot of credit to the big men.

The Miners find themselves with sole possession of second place in the league after both UAB and Western Kentucky lost on the road, to Rice and Marshall, respectively.

UTEP will have next Thursday night off, before hosting the UTSA Roadrunners on Saturday night at the Don Haskins Center. UTSA saw its three-game winning streak cut tonight by a Charlotte team the Miners beat a couple of nights ago. It will be the second time the two Texas schools meet this year, UTEP beat the Roadrunners in San Antonio 73-55 in mid-January.