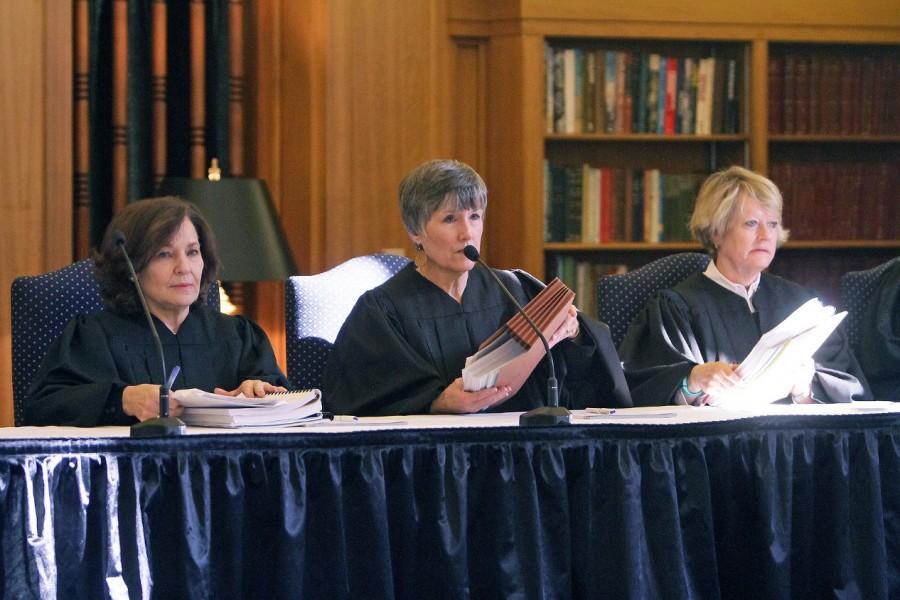 The Texas Court of Criminal Appeals visited El Paso for the first time Thursday, where their sitting was held in the Geology Reading Room at UTEP.

The presiding judge and seven of the eight judges heard two oral arguments on capital murder and aggravated robbery.

The court’s office is in Austin, Texas, but they will visit other Texas cities that have major law schools throughout the year.

Judge Sam Medrano brought up the idea of having the court held at UTEP, where he graduated in criminal justice in 1985.

Both Presiding Judge Sharon Keller and Judge Elsa Alcalá were interested and agreed to have the sitting on campus.

“The whole process of getting them here was absolutely worthwhile,” Medrano said. “I want the court to see what the university has to offer so they can come back. They all love it here so far.”

The oral arguments were 45 minutes each, with a 15-minute break. There were about 50 students, faculty, staff and members of the public who attended.

Yolanda Tiemann, senior organizational communication major, said Judge Bert Richardson is her uncle and informed her of the hearing.

“I was disappointed that I didn’t hear anything about it from UTEP itself,” Tiemann said.

She said that it was fascinating to attend and finds law interesting.

“What made this special was the appeals process, as those cases are handled differently than typical legal cases at the lower levels—the fact that they rarely do them outside Austin, and that we were able to ask questions at the end,” Tiemann said.

Tiemann said that for future events, she would like to have more legal procedures and international figures brought to UTEP.

“We have many Mexican political figures come, but it would be great to be exposed to other elements and culture as well,” she said.

The first case was from 2008, where Terence Andrus was accused of murdering two people in a grocery store parking lot in Fort Bend County, Texas. He was later arrested in Louisiana for an outstanding warrant regarding a robbery case in Harris County, Texas.

Two officers interviewed Andrus in New Orleans at the jail where he was held. Andrus used his Miranda rights and denied the accusations.

When being transported back to Texas by the two officers, Andrus was informed of his Miranda rights. Everything up until this point had been recorded.

During the trip in the police car, Andrus confessed to the murders. However, when he went to trial the next day, he held back his statement and claimed that the officers questioned him after he denied the first interview, which went against his right to an attorney.

“Don’t you think it’s odd that the one moment something was not recorded, he confessed?” Alcalá said.

The case proceeded in asking for the reliability of the confession since it was not recorded. The attorney defending Andrus, Cary M. Faden, said that since the record given to the judges did not include everything, such as the unrecorded interview, it was not the norm for determining the death penalty and difficult to argue.

“Your case revolves around who should be more credible?” said Judge Barbara Hervey.

Faden said that the officers went to New Orleans hoping Andrus would talk, prompting a confession out of him.

“He was not asking questions about the capital murder. Most of the comments he made in their care are minimal or unrelated to that. The officers shouldn’t have been talking to him, anyway,” Faden said.

After his conviction for capital murder, he was sentenced to the death penalty in 2012.

The second case involved Christopher Allen Phillips, who was charged with aggravated robbery at a beauty salon in McLennan County, Texas.

While in jail, he asked his inmates to testify to his innocence in court, and blame the driver in the getaway car that was involved in the robbery.

Previous courts said that the jailhouse witness testimony was unreliable, and the Texas Legislature tried to limit it in the previous trials.

“The statements made by these individuals in confinement, how are they different from, ‘will you help me cover up my crime?’” said Judge Kevin Patrick Yeary.

The rest of the case revolved around the reliability of these statements made by the confined men with Phillips.

Phillips has since been sentenced to life in prison.

No decision was made by the court.

Both attorneys asked for each case to be remanded—send the cases to a lower court for reconsideration.

By the end of this case, the judges held a question and answer period. They also gave advice to future law students.

Alcalá said that growing up was hard since she came from a poor background, and had been orphaned until she was 13 years old. Once she entered college, she pulled out loans and worked to help pay off her debts.

She said that ignoring her internal voice was the hardest, the voice that told her she wasn’t worth it.

“Don’t be your own worst enemy, and be careful with that internal voice,” she said. “You can do anything if you set your mind to it.”

Lorain Ambrocio may be reached at [email protected]