Pitbull and Enrique Iglesias light up the Don Haskins Center 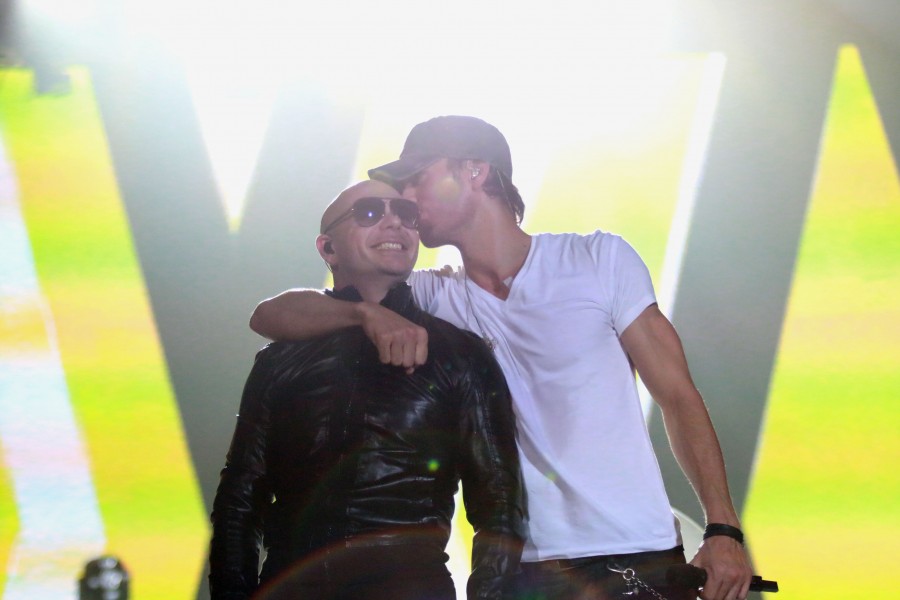 Pitbull’s songs, “Took My Life From a Negative to a Positive” to “Give Me Everything,” summed up his whole tour with Enrique Iglesias, with performances that were not mind-blowing as expected.

Enrique Iglesias and Pitbull shared the stage at the Don Haskins Center Tuesday night with thousands of people flooding.

The show kicked off with special guest J Balvin and his three male back-up dancers, who set the stage for an energetic night. The reggaeton singer had the audience dancing during most of his performance.

As he finished his set, he took pictures with fans, while house music kept the party atmosphere going as the crowd anxiously waited for Pitbull.

Once on stage, Pitbull’s set had music video’s playing on a big screen behind him that featured many artists he worked with over the years, such as J-Lo, Chris Brown, Kesha, Ne-yo, Shakira and Christina Aguilera.

He was accompanied on stage by six female dancers throughout the night, who went through six costume changes, while Pitbull only changed into a white blazer.

Pitbull connected with the crowd by describing the struggles he has endured throughout his life and how he turned it all around. He embraced his culture by speaking Spanish between his songs.. Pitbull also recounted memories when he used to visit El Paso for car shows, club promotions and to enjoy the nightlife that El Paso and Juarez offered before he made it big.

Confetti and fog filled the air when Pitbull performed the last song from his set.

Enrique Iglesias entered the stage at this point and was not afraid to interact with the crowd. Three fans were able to get on stage with him, one of whom was completely drunk and forcefully kissed Pitbull on the lips. Iglesias invited a husband and wife to join in for a duet and a shot of what looked like tequila as everyone else watched in jealously.

Iglesias and Pitbull wrapped up the show with their hit song “I Like It” as the arena filled with confetti and balloons, which had “Love and Sex” written on them, the title of Enrique Iglesias’ album.

The show was a success, but I was expecting more suspense, more bass, and less lighting. Since Iglesias and Pitbull collaborated on five songs together, I was hoping to see them on stage performing those more songs together. Ironically, they only sang one together, which was the finale song.

Overall, the crowd seemed to enjoy themselves as all the music artists kept them on their feet all night and chanted for an encore when the concert came to an end.