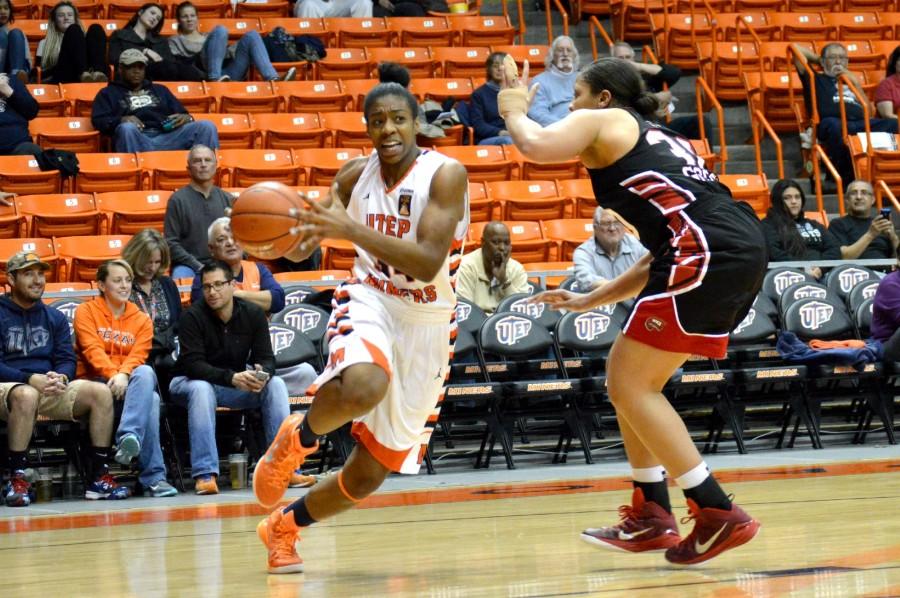 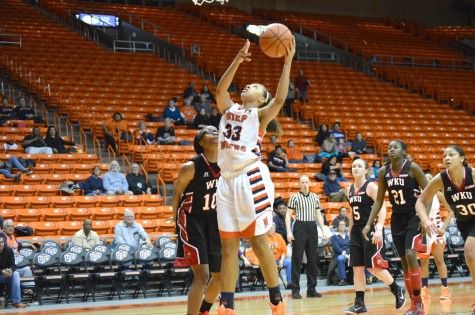 After Thursday night’s game, Coach Keitha Adams told the assembled press that she was very proud of her teams’ effort. The 1,000 or so fans who braved the El Paso snow to support the Miners saw two very well coached teams battle until the very end. The Miners played one of their best games of the season in most respects but still came up short to the Western Kentucky Lady Toppers, 80-74.

Going into the game it was the size of WKU that looked to be a problem. The Miners were able to negate the height advantage and come away with 41 rebounds to WKU’s 35. The Lady Topper’s fast break offense was also a concern for UTEP – who held WKU to a total of six fast break points. Everything looked to be going UTEP’s way apart from one key stat – turnovers.

“You can tip your hat to them some, but I also think that we had some one-handed passes. “We weren’t fundamental as much as we need to be,” said Adams about her teams’ 24 turnovers.

Going into the game UTEP averaged 14.7 turnovers per game.

Against a team that had only lost two games all year, the Miners went into halftime down just 32-30. The Lady Toppers were able to quickly jump out to an eight point lead after the break in a game that saw the score tied five times and the lead change eight times.  It took a lot of three pointers to keep the Miners in a game that saw WKU shoot 36 free throws to the Miners 23. Free throws made was the only other significant stat where the Miners trailed the Lady Toppers.

Western Kentucky started three seniors and the experience showed when it came to drawing fouls. UTEP junior guard Cameasha Turner did not feel that the fouls were the difference maker. Like Coach Adams, Turner preferred to highlight her teams’ sloppy ball control.

“I wasn’t even worried about the fouls. What was most frustrating was the turnovers,” said Turner. “Coach in practice has been really preaching, let the foul count go, don’t mess with the refs. There’s other things we could have done to win the game.” 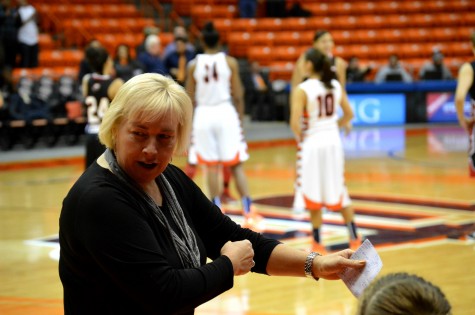 Thursday’s hard fought game saw three Miners score in double digits – Turner with 18, freshman guard Lulu McKinney with 16 and junior guard Anete Kirsteine with 15. When the team needed a three pointer to stay close to the Lady Toppers, it seemed like Kirsteine, whose 15 points tied her career-best, was always there to provide it. On the night, Kirsteine was 5-6 from behind the arc.

There are a lot of positives for the Miners to take from a six point loss to the #24 team in the country. After the game, Coach Adams had nothing but words of encouragement for her young team.

Before departing the press room, Adams also had a few words of encouragement for the fans who braved the cold and snow to support the Miners.

“The fans that came out tonight, they were truly loyal,” Adams Said. “It’s colder than all get-out out there. So, we appreciate that.”

The fans who made it to the Don Haskins Center on Thursday night no doubt appreciated the effort of Coach Adams and her team just as much.