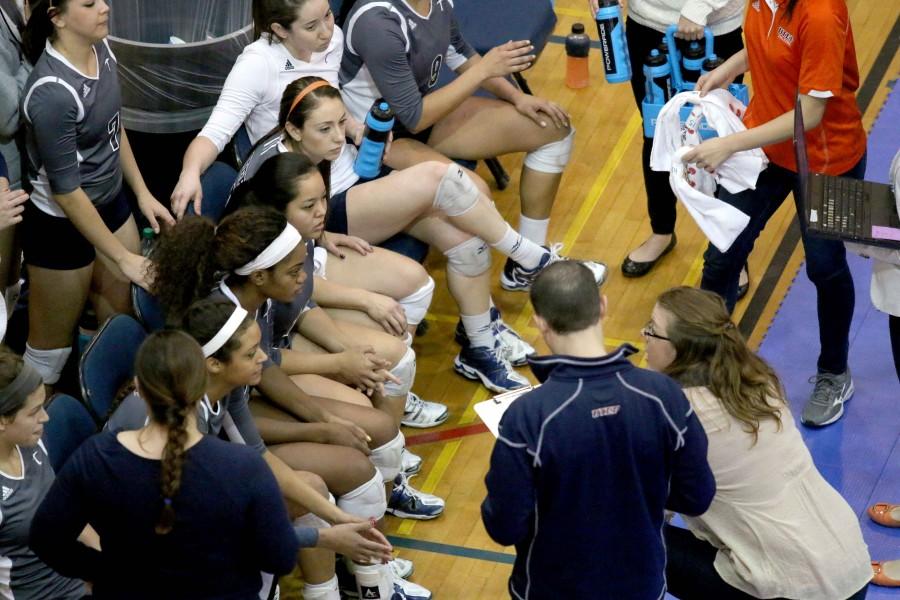 The 2014 volleyball season was not going to be a good one for the Miners. That was apparent considering what they lost after the 2013 season. At the beginning of the season, the players and coaches all said the right things, but a successful season would be a stretch.

Coming off a 14-16 record in 2013, the Miners lost their statistical leader in kills, assists and digs. Basically, they lost their best player in each phase of the game. At the beginning of the season, head coach Holly Watts knew replacing those players would be a stretch.

“You usually don’t replace a senior with a freshman,” Watts said back in August. “We’re not expecting our freshman to come in and fill those shoes. Those are huge shoes to fill and everybody is just trying to step up so we can take care of that production.”

The problem is that the production didn’t come; the Miners struggled all season long to find dependable players at each phase of the game. The players themselves were not incapable, but for most part, the inexperience was an overwhelming factor—eight of the 14 Miners this season were underclassmen and coach Watts played six of them regularly.

“I knew it was going to be a learning process because we we’re so young,” Watts said. “I didn’t realize we would have this much trouble terminating the ball. Nobody was able to step up this year and be the one that did that.”

“This season didn’t go as we hoped,” said sophomore setter Lindsey Larson. “It was rough, but we competed well, especially in the preseason where we were playing crazy good teams like BYU and Texas.”

The Miners have had a multitude of problems, but the biggest one that remained constant throughout the season was their lack of consistency. At one point, the Miners would look great then five points later, they would self-destruct. That frustration plagued their season.

“It’s not the losing in general, but losing when we know we can win,” Larson said. “Knowing that we have the talent as a team, but just putting it all together and trying to overcome that frustration of not working together as well as we could of was hard.”

Upperclassmen such as junior outside hitter Talia Jones knew that the season would have growing pains considering what they lost in personnel. As hard as it was, she would not call it a disappointing season, but a building season.

“I would describe this season as a building year,” Jones said. “We’re just getting to know each other on the court and it didn’t go exactly how we wanted. I wouldn’t say it was a disappointment, we didn’t come out exactly how we wanted to, but some games were really close and we just need to learn.”

The 2014 season paints a gloomy picture of the UTEP volleyball program, but the future is actually very bright. Where the lack of experience seemed to be the Miners’ downfall this year, it should help the team in the long run.

The Miners are returning 12 of the 14 players from this year’s team, and by the start of next year, the amount of experience on the team will be plentiful. In the middle, the Miners started two underclassmen—freshman Krystal Ejesieme and sophomore Dominique Millette. In Lindsey Larson’s first year at the setter position, she ranked in the top 10 in conference for assists, and freshman outside hitter Coline Coessens led the team in kills, which has never been done by a freshman.

“We can see a lot of good things outside of this season,” Coessens said. “Next year, it’s not going to be a losing program because we’re getting so much better and we have had so many freshman playing.”

The Miners might not be the best Conference USA team by next year, but two years down the road, coach Watts might have something special on her hands. There are not too many freshman and sophomores who can say they played as much as the UTEP players did. The Miners’ future seems to be nothing but bright and exciting.

“Its exciting thinking about the group we got returning,” Watts said. “It’s pretty exciting to have our middles back (Ejesieme and Millette). Coline (Coessens) being on the outside as a freshman, Lindsey being a sophomore as a setter, this being her first year running the show, Sarah (Villa) being our other sophomore who got a lot of court time, and they did a nice job for us most of the time.”