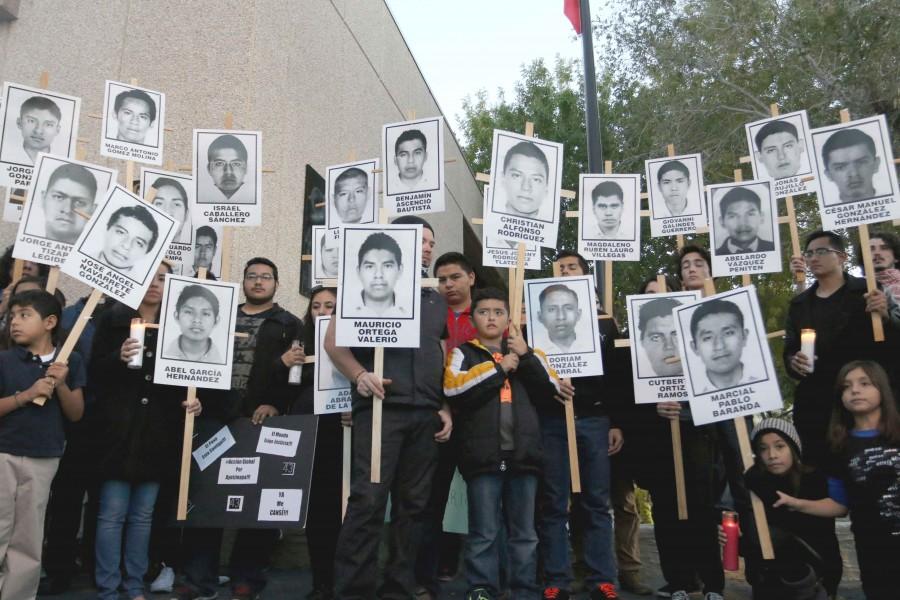 Protestors gather in order to bring awareness to the unjust kidnapping and the possible murder of 43 college students in Ayotzinapa, Mexico.

Sitting in each chair is a fluttering black and white picture, one for each of the 43 missing students from Ayotzinapa, Guerrero.

“Forty-three chairs, 43 people and 43 biographies. So people can ask those questions, what is happening? Who were they? What are their stories?” said Marlett Garcia, social work graduate student. “We want people to wake up.”

The chairs were arranged like the rows of a classroom and formed part of a temporary exhibition as students and locals convened at the Union before marching to downtown El Paso to show solidarity for the 43 missing Ayotzinapa students.

“We’re not going to relent from this movement,” said Eric Chavez, senior psychology major. “It’s justice what we’re calling for, nothing extravagant.”

The protest group at UTEP was organized by Ayotzinapa Sin Fronteras and the Master of Social Work Student Organization. It was one of three protest groups scattered throughout the city that marched downtown to the Mexican Consulate.

“We are here to give life to a light that had turned off,” said Sharon Murillo, philosophy graduate student at UTEP and one of the student organizers. “Ayotzinapa woke up that hope.”

The local protest groups were part of El Paso Por Ayotzinapa, of a global day of action also known as Accion Global por Ayotzinapa. Other cities with scheduled protests included New York, Los Angeles, Nuevo León, Monterrey and Mexico D.F, among many others.

“There are so many movements going around all throughout the world,” said Garcia. “It has awakened Mexico, but also the U.S and other countries.”

Across the border in Ciudad Juárez, students from the Universidad Autónoma de Ciudad Juárez organized protests as well.

“In Ciudad Juárez, the students are tired, they’re standing up.” said Selfa Chew, social activist and UTEP visiting assistant professor of history. “They themselves are giving direction to their own professors.”

Rosemary Martinez, sophomore multidisciplinary major and president of Movimiento Estudiantil Chicano De Aztlán, said the movements were organized as a collaboration with Mexico to address the indifferences universities have had toward the issue.

“Everybody worked individually with their own organization, but gathered together in the union to march,” said Martinez.

The UTEP protest group marched downtown, walking for two hours. They shouted various chants, among them a loud numeric countdown that ended at 43, echoing throughout the small streets of downtown.

Some cars would honk as they passed by the protestors, screaming: “Justice for Ayotzinapa!” from the inside of their cars with their fists raised in the air.

The group of about 80, all dressed in black, made a stop in front of the office of Congressman Beto O’Rourke, D-El Paso, to protest the Merida Initiative, a partnership between the U.S and Mexico that was established in order to combat organized crime.

Under the initiative, more than $2.1 billion have been appropriated to Mexico since it was implemented in 2008.

“This money has been used to arm the Mexican army against its civilans,” said Chew.

“As long as there is exploitation in Mexico, it doesn’t matter that marijuana gets legalized,” Chew said. “That’s not going to help, what we want is justice.”

The group finally convened at the Mexican consulate and was later joined by other local protest groups.

“Together we will make change, it can’t be done any other way,” said Guillermo Glenn, one of the organizers of the local groups. “We need to keep fighting.”

Glenn also proposed the groups meet at the Mexican Consulate again on Nov. 28 for a continued stand of solidarity for the 43 missing students from Ayotzinapa.