Alexi Cruz, released from ICE detention, speaks to The Prospector 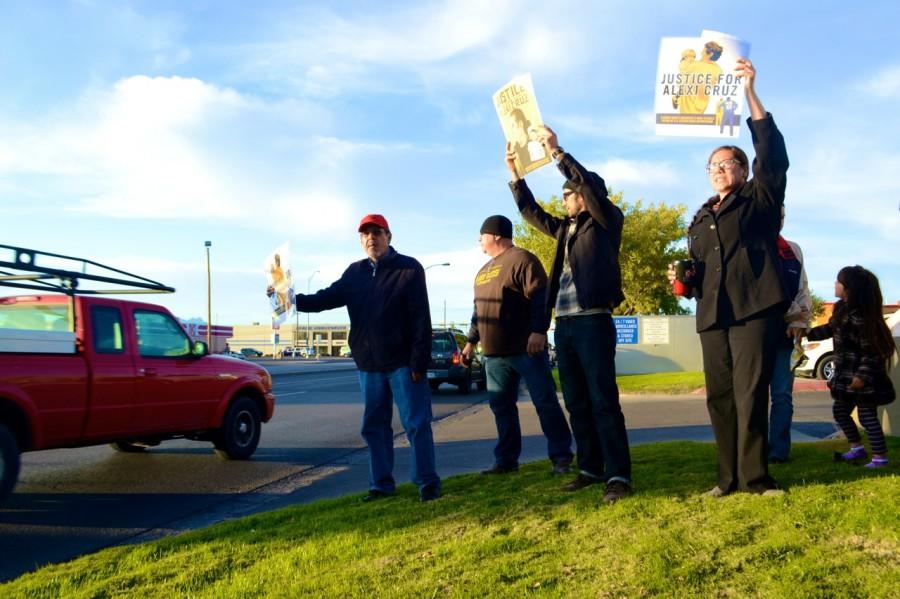 Protestors gather on Hawkins Boulevard and Montana Avenue to rally for the release of student Alexi Cruz.

Across 500 miles, Alexi Cruz’s two-year-old daughter is illustrated on a yellow poster. With an unflinching look, she holds a sign that says, “Release my dad.”

Cruz, an undocumented immigrant who lives in San Antonio, was detained by Immigration and Customs Enforcement after his car broke down in Lordsburg, New Mexico.

“I was feeling dizzy because I was walking for more than 13 miles and I was super thirsty so I decided to call the highway patrol,” Cruz said. “They told me ‘okay, we’re going to get a hotel for you.’”

After being interrogated by the highway patrol and failing to show official state identification, Cruz was detained by ICE and then sent to the Immigration Detention Center in El Paso.

Cruz was released on Nov. 13 around 7 p.m. after being detained for seven days.

Cruz, who identifies himself as being of Yacki and Mao descent, was met by abuses from immigration officers inside the detention center when asked where he was from.

“They were asking me ‘Where are you from?’ and I was like… ‘I’m from this land, I belong to this land.’ One of the officers was getting pissed,” Cruz said. “He grabbed me from the handcuffs, he kicked me in the knees…. And I was in pain, they take off my shoes, they take off this jacket and they send me with no blankets to sleep in the floor.”

In 2013, the Center for American Progress submitted a Freedom of Information Act request to the Office to the Department of Homeland Security’s Inspector General. The request turned up 200 reported cases of abuse.

“They gave me nicknames like Mr.Native or Señor Apache,” Cruz said.

The decision to detain Cruz was met with heavy criticism by immigrant and ingenious groups in El Paso because he is eligible for Deferred Action for Childhood Arrivals, a temporary relief from immigration enforcement for people who entered the country before they turned 16 years old.

“He definitely shouldn’t be detained for three very bold reasons. As an indigenous man, he has rights to these lands, as an eligible DACA student they should have accepted his school identication card as verification of that, also as a father of a U.S. citizen, he has every right to be here,” said Cemelli de Aztlan, social justice advocate and lecturer at UTEP. “The United States should not be known as a country that breaks apart families.”

A separate FOIA request submitted by the Transitional Records Access Clearinghouse revealed that from 2008 to 2012, more than 77.4 percent of the detainees held by ICE centers had no criminal record.

In an effort to release Cruz, De Aztlan turned in an 88-page document and a petition signed nationwide by 600 people to ICE Field Officer Adrian Macias. She also organized a rally outside the offices of the U.S. Citizenship and Immigration offices on Nov. 13.

“These borders were imposed upon us. It’s not natural, its not anything that we agreed to and nobody ever gave any consideration to the peoples who do migrate, people who were separated,” said Celia Aguilar, member of Danza Azteca Omeacoatl and UTEP graduate. “So you have these borders that separate people, that separate families.”

Cruz said he would not be reporting the abuses committed against him by the immigration officers but that his message to immigrants who face similar situations is to keep fighting.

“We deserve to belong in this land,” Cruz said.

Maria Esquinca and Kimberly Valle may be reached at [email protected]