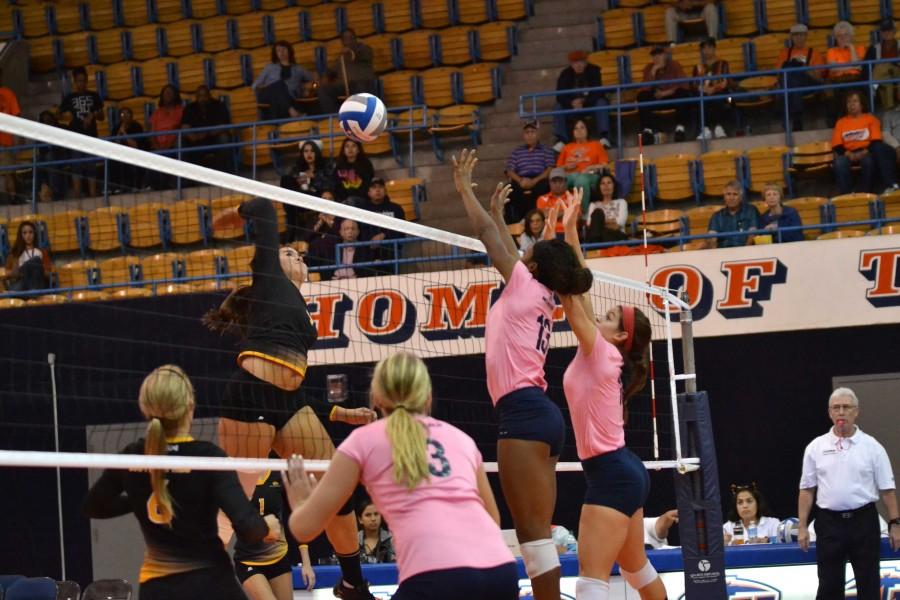 Trailing 9-7, Southern Miss would score 10 unanswered points before the Miners stopped the bleeding. The Golden Eagles would finish out the first set on an 18-7 run.

In the second set the Miners got off to a quick start, going ahead 7-1. Southern Miss slightly closed the gap, but somehow the Miners held strong and never surrendered the lead. The closet the Golden Eagles came within was three points.

Going into the 10-minute intermission the Miners were playing well and more importantly they we’re in the match. The third set proved to be the closest set of the match, after another split of the first 10 points, Southern Miss gained a small advantage with a 3-0 run.

Late in the set when the Miners needed to make a run they did, the Miners stole the lead and went up 20-19. What came after was disappointing— Southern Miss ended the set on a 6-0 run thanks to some nifty serving and careless points by the Miners.

“We’ve been working so hard to stop runs,” said UTEP head coach Holly Watts. “It was disappointing to let that many go at the end of the set especially.”

Despite blowing an opportunity to take the lead in the fourth set, the Miners did not let that deflate them. In the fourth set the Miners took a four-point lead thanks to a 5-0 run. Southern Miss would respond though and in a big way.

The Golden Eagles went on an 11-2 run and took firm control the set. Coach Watts called a timeout, which resulted in a 5-1 run by the Miners but it wouldn’t be enough to stop the Southern Miss attack.

Although Southern Miss ultimately proved to be the better team at times it felt like the Miners were a kill or block away from taking firm control of the match. Senior outside hitter Jacqueline Cason attributes the lost opportunity to a lack of intensity in the fourth set.

“I think the intensity went down in the fourth (set),” Cason said. “When we block and have good kills we get really really intense. Just like in the second set we got a lot of blocks and kills, so I think that’s what got us slowed down on the intensity level.”

The Miners now fall to 4-18 on the season and 2-9 in conference play. Their next match is against Louisiana Tech in Ruston, Louisiana on Nov. 2.