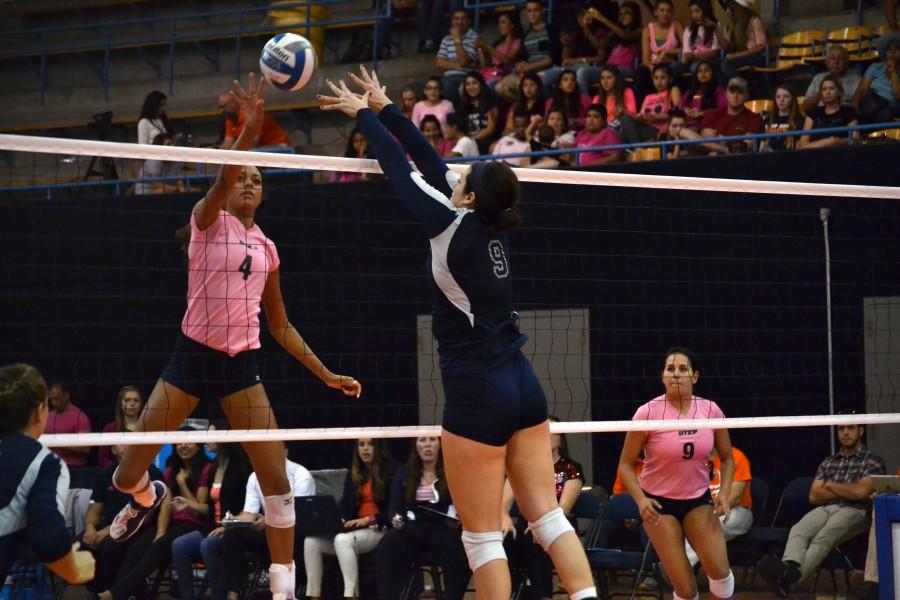 Back in front of their home crowd for the first time in nearly three weeks, the UTEP women’s volleyball team’s two game win streak was snapped, as the Rice Owls defeated the Miners 3-0 (25-22, 25-12, 25-18) at Memorial Gym.

Rice jumped out to a quick lead in the first set with a 4-0 lead, which quickly prompted Miner head coach Holly Watts to call a timeout. The Miners eventually settled into the match and kept within striking distance through the first half of the first set.

Throughout the first 20-points of the set the Owls consistently held a four point lead, then the Miners made a run to cut the Rice lead down to one. Serving with a chance to tie the set at 16-16 the Miners committed a few errors and turned in some sloppy points.

Rice would go on a 7-2 run, and close out the set 25-22, which would be the closest contested set of the match. The Miners sloppy play that hindered them at the end of the first set carried over into the second set.

Rice jumped out to another early five-point lead and never looked back. The Owls had their biggest lead of the match in the second set at 10, leading the Miners 16-6. A constant theme of the second set was runs—both teams had them, except Rice’s runs were longer and more frequent.

The Miners would go on a 4-0 run to put the game back into a respectable margin, but Rice responded with a 9-2 run that would take the set and control of the match going into the 10 minute intermission.

At times the Miners were in contention to win points and possibly string together a substantial run, and at other times the Miners seemed unfocused and unorganized. The inconsistent play is what has plagued the team all season.

“When we’re doing good, we’re doing good and if we got down a few points it seems like we got discouraged when we shouldn’t be,” said Lindsey Larson, sophomore setter. “We just have to keep our heads up and if we make mistakes, shake it off and keep going.”

Coming out of the 10-minute intermission the Miners were poised to play their best set. The Miners seemed to have neutralized the Owls front attack, with the third set going back and forth throughout the first 20-points.

After staying neck and neck with the Owls, the Miners started to falter but not at their own hands. Rice sophomore setter Sara Blasier was sensational for Rice, finishing the match with an attack percentage of .857.

Time and time again Blasier caught the Miners off guard, or finished points with quick and deceptive dump plays.

“She is very sneaky or what we call deceptive,” Watts said when referring to Blasier. “She has a lot of different shots she can make. Everything you try to teach your setters she was doing.”

Overall Watts saw the match as an improvement from the last time the Miners played Rice, despite the inconsistent play.

“Compared to the last time we played Rice, we played much better,” Watts said. “We competed very well, our defense was better, and we just did a lot of things better. We gave ourselves chances tonight, but when we we’re down there we didn’t have a chance.”

The Miners now fall to 4-15 on the season and 2-6 in conference play; their next match is this Sunday against co-conference leader Western Kentucky at Memorial Gym.