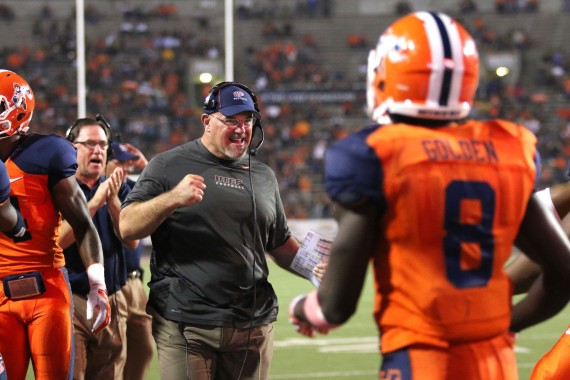 Coach Sean Kugler congratulates his offense after another touchdown.

The UTEP football team capped off their homecoming week celebrations with their first ever match up against the Old Dominion Monarchs. After a near comeback by the Monarchs, the Miners triumphed at the end winning 42-35.

The Miners got off to a quick 7-0 lead after the Miner defense forced three sacks in the first two Old Dominion possessions. For the second straight week the Miners gave up points off a turnover, the Miners had another blocked punt that led to the Monarchs equalizing.

The Monarchs went for a surprise onside kick that went out of bounds after scoring their second touchdown. The good field position resulted beneficial as the Miners scored off their first play of the possession that went for 37 yards, and a 28-14 lead in the third quarter.

Though the Miners had a comfortable two-touchdown lead, the game quickly turned into a shoot out as the Monarchs responded with a drive of their own. The Old Dominion had a drive that went for 80 yards down the field and resulted in a touchdown.

The Miners were simply outplayed by the Monarchs in the second half. UTEP gave up the ball on fourth down and muffed a punt attempt on the UTEP 22-yard line, making it the second turn over on special teams for the game— the play resulted in an intentional grounding penalty against the Miners. The Monarchs on the other hand scored in each of their first three drives, including scoring off the UTEP turnover to tie the game after three quarters.

What was once a comfortable lead quickly became a tied game. Coach Kugler was proud of his team resiliency after a horrendous third quarter.

“We had to fight through adversity and to be honest I’m glad the game played out the way it did we had through adversity again, and you know what these guys refused to loose.” Kugler said. “It wasn’t the cleanest game we made some mistakes, we didn’t play the smartest all the time, these guys played with a lot of heart tonight.”

The Miners took control of the game in the fourth quarter with a nine-minute drive, which then resulted in a touchdown by Autrey Golden. The drive not only took time off the clock but also gave UTEP the lead again.

The Miners ran for over 330 yards and scored four touchdowns through the running game. Aaron Jones rushed for over 100 yards for the fourth time this season and will once again be ranked in the top 10 for rushing yards in the nation.

“It’s big, we are 3-3 and 1-1 in conference and we got a bye week to get everybody healthy, and so we are exited about that, we all feel like we can do as one another does and that’s what makes our running back group special.” Running back Aaron Jones said.

The Miners won the game 42-35 in front of a Sun bowl that housed more than 25,000 for their homecoming game. The Miners will look to build off this win going into a bye week and prepare for the following week against another conference team at UTSA.