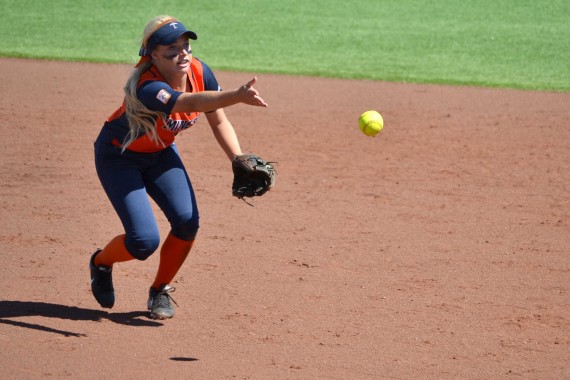 Freshman Courtney Clayton throws the ball to second base looking for a double play at the Helen of Troy Softball Complex on Sunday Sept.28.

The UTEP women’s softball team began their fall exhibition season on Sunday, Sept. 27 at the Helen of Troy Softball Complex. The doubleheader against Odessa College was a chance for head coach Tobin Echo-Hawk to see where her team stands prior to the upcoming spring season.

This year’s team is drastically different from last year’s with a total of nine newcomers to the team. These nine will try to utilize the spring practice time to mesh with the 12 returning players, who are coming off of the team’s best season in the last four years. Despite the improvement last season, the team finished 11th out of 13 teams in Conference USA.

Following a win in both legs of Sunday’s doubleheader, coach Echo-Hawk’s main goal for the fall is to see what each player’s role will
eventually be.

“We’re trying to mix it up and put people in different positions to see how it goes and what the best fit is going to be,” Echo-Hawk said.

One of the main areas is with the pitchers. Last season, the Miners had a league-worst 6.25 earned run average and was over one full point higher than the next highest in
Conference USA.

During Sunday’s games, freshman pitcher Dani Fincham impressed the coaching staff with her recovery from a poor first inning in the second game. After giving up four runs in the first inning, Fincham came back in the fourth and finished the game without giving up another run.

Fincham is the only new pitcher on the team’s roster, but Echo-Hawk expects to see improvement from everyone following the addition of new pitching coach, Sara Plourde, who is a native of Bristol, Connecticut, she ranks eighth all-time in the NCAA record books with 1,662 strikeouts during her career with the University of Massachusetts softball team. Echo-Hawk is pleased with what she has seen so far.

“She’s done a great job, the kids are responding well to her and I’ve seen some improvement,” Echo-Hawk said. “Erika Harrawood, who didn’t pitch a ton for us last year, came in the first game and pretty much shut them down.”

Hitting was far from a problem last season for the UTEP softball team. The team ranked fourth in C-USA in team batting average with a .290. With a total of 26 hits in two games versus Odessa College, it does not appear that much has changed.

Freshman infielder Courtney Clayton contributed greatly to the hit barrage in her first exhibition game in a UTEP uniform. Clayton went four for five, with three runs batted in during the first game and added one more RBI in the second game. Clayton attributed her great performance mostly to the support of
her new teammates.

“All of the upperclassmen have just been so welcoming and we just feel a part of the family already,” Clayton said. “The community is super welcoming. The girls are super welcoming. It’s just a really comfortable fit.”

Clayton and several other freshmen played a prominent role during the doubleheader as coach Echo-Hawk mixed in new players with the team’s returning players. Freshman infielder Taylor Sargent contributed a triple during the second game and freshman infielder Hope Moreno battled hard to eventually get the hit that gave the Miners the lead for good. Junior infielder Kawehiokalani Netane hit a two-run home run after coming off the bench in the second game. Netane pointed to the incoming freshmen as a motivating factor this fall for the team’s
returning players.

“The freshmen came in strong, so it made all of the upperclassmen take a step back and say okay, I guess I need to step it up,” Netane said.

After losing seven players from last year’s much improved squad, Echo-Hawk was able to bring in eight freshmen to help fill in some of the gaps. Other newcomers to the team include two sophomore transfers, catcher Erica Chasco and infielder Kiki Pepi. Pepi played several positions in the infield during both games of the doubleheader and was very vocal during her time on the field.

“I’ll definitely keep the defense together when I’m out there. I think I bring a lot of energy and leadership,” Pepi said. “As long as the freshmen see me as someone they can really come up to and trust me on the field, I’m happy with that.”

Pepi brings with her not only the experience of a transfer who has played a year of NCAA Division I softball, but the experience of playing in the Pac-12 Conference for Oregon State. Pepi says she is much happier with the level of connection within her new team. She is eager to move past her Pac-12 past and hopes to become a leader for the Miners.

As coach Echo-Hawk continues to move players around searching for the right fit, the Miners will finish out their fall exhibition schedule with a total of six more games before the end of the semester. Echo-Hawk is excited about the potential of the squad, but knows that there is still more work to do before the winter break.

“We have a great group of newcomers and you mix those with our returners, I think we’re going to be pretty good,” Echo-Hawk said. “We’ve just got to work out some of the kinks.”

The team’s next game will be against New Mexico State University at 7 p.m., Oct. 8, at the Helen of Troy Softball Complex.