Truce: College Republicans and University Dems strive to get students to vote 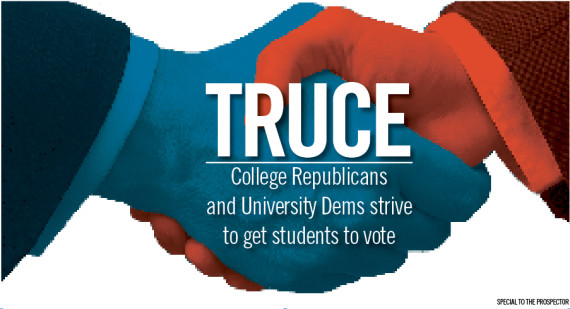 The upcoming Texas gubernatorial election between Democratic Sen. Wendy Davis and Republican Attorney General Greg Abbott has political organizations at UTEP racing against time and casting their differences aside.

Whether it’s the University Democrats or the College Republicans, among others, they are all united by a common goal: getting more than 23,000 UTEP students registered to vote before October 6, the voter registration deadline.

“Everybody is on the same page about getting people registered to vote because it’s one of our biggest challenges,” said Jose Villalobos, associate professor of political science and advisor for the University Democrats. “There’s so many people that
aren’t participating.”

According to a study by the U.S. Census on young adult voting in presidential elections from 1964-2004, voters between the ages of 18 to 24 have consistently voted at lower rates than all other age groups.

“I know that a lot of young people that I’ve spoken to, they feel that their vote doesn’t matter,” said Moises Blankenship, senior history major and president of the College Republicans.

Villalobos has also partnered with the Center for Civic Engagement to involve his Latino politics class with new software called TurboVote, a social media tool that allows students to register as voters. It also sends them notifications about upcoming elections.

“UTEP has a very high goal of getting people registered and TurboVote is this project that’s been adopted on campus and it’s already been very successful,” Villalobos said.

Whether individually or in groups, students in his class must meet a quota of students registered through TurboVote. Quotas range from 20 voters per individual, to as many as 150
voters per group.

“The purpose of it is to get students involved in the political process and be actively, continuously engaged in voting,” said Lilian Bastidos, senior political science major.

In order to combat voter apathy, University Democrats and College Republicans have hosted events throughout the semester and have invited speakers to encourage young students to vote.

The College Republicans partnered with West El Paso Republican Women to bring New Mexico Governor Susana Martinez, who is a UTEP alumna, to campus on Sept. 6.

“She just spoke about why it’s important to be politically active,” Blankenship said. “It was just strictly about advising people to go out—to go vote.”

However, lack of voter participation may have more to do with a lack of knowledge about the voting process than apathy.

“I really don’t think that students are necessarily apathetic, I think the problem is that they do not see the connection between voting and their daily lives,” said Richard Gutierrez, political science lecturer. “Getting students to understand that in a democracy, it is the responsibility of all citizens to participate and how politics affects their daily lives is the challenge. So many students would just prefer someone else make the choices for them and then they can criticize those choices.”

“When I’m registering people to vote I think a lot of people don’t actually know you have to get registered to vote,” said Joshua Acevedo graduate student in political science and president of the University Democrats.