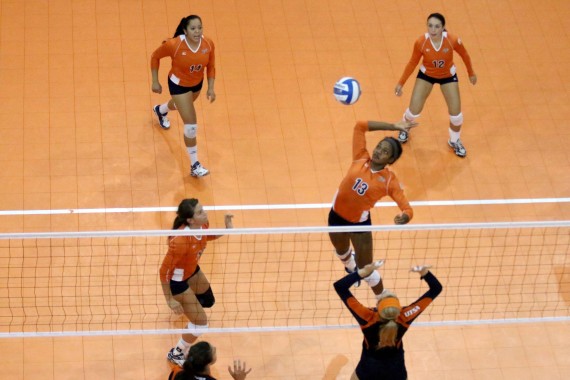 Last night the UTEP women’s volleyball team hosted their Conference USA home opener against the UTSA Roadrunners, and suffered a humbling defeat 3-0 (25-23, 25-11, 25-19) at Memorial Gym. With the loss the Miners now fall to 0-1 in conference and 2-10 overall.

“I’m very disappointed,” Watts said. “I thought we have played a lot better up to this point, even in matches that we didn’t win. We had some nice individual plays, we just weren’t able to string them together tonight.”

The first set proved to be a back and forth affair, with each team finding momentum to put together long strings of points. UTSA held the largest lead at four points, but the Miners immediately closed the gap. Although the Miners were in the thick of things, they could not tie the game or take the lead. The Roadrunners eventually took the set 25-23, which would be the longest and most competitive set of the match.

The second set proved to be the exact opposite of the highly competitive and intense first set. The Miners never found a rhythm, as they went into a four point hole early on, the Roadrunners gained a five point lead at 8-3, and never looked back winning 13 of the next 16 points.

At one point the Roadrunners led by 16 points and were on their way to holding the Miners to single digits in points for the set. The big drop off in overall play from the first to second set was the biggest concern around the team.

“In the second set we started off really weak,” said Talia Jones, junior outside hitter. “We needed to do things from the beginning rather than the end. We picked it up in the end and that was our problem.”

Coach Watts’ message to the team going into the 10-minute intermission was to keep playing.

“The plan was to come back out and win three (sets),” Watts said. “I thought we played better in the third set, but we still just have to work on putting those points together.”

The Miners did play better in the third set but another slow start put them behind as they played catch up for the rest of the set. Down by five points at 10-5 the Miners made a run to cut the lead to one, but UTSA answered back and would not let the Miners get closer than three points. The Roadrunners took the third set 25-21 and handed the Miners their 10th loss of the season.

After a tightly battled first set, the Miners hopes of winning evaporated instantaneously. Coach Watts does not believe that the Miners poor performance is not indicative of what they will play like this season.

“I don’t think that was the team that played against Denver and San Francisco,” Watts said. “Even though we didn’t win those matches we had great defense and aggressive attacking.”

The one positive that the Miners are looking to take out of the match is that there are no more invitationals, they can finally settle in and play conference matches.

“I love playing conference,” said Jacqueline Cason, senior outside hitter. “No more two games in one day, and being able to get more chances to play at home is always good.”

The Miners had one day in between their last match at the Denver Invitational and their C-USA season opener, the Miners spent their day off traveling from Denver back to El Paso. Nevertheless, coach Watts knows that the Miners need to find a way to gain consistency if they want a chance at competing in conference.

“If you can play consistently and get the momentum, then you’re doing great,” Watts said. “That’s something were working on in practice to try to develop that consistency and runs of points together. We still have a lot of young kids in practice. It’s going to be a process all year, hopefully we get it together sooner rather than later.”