The ‘80s: A decade of dominance 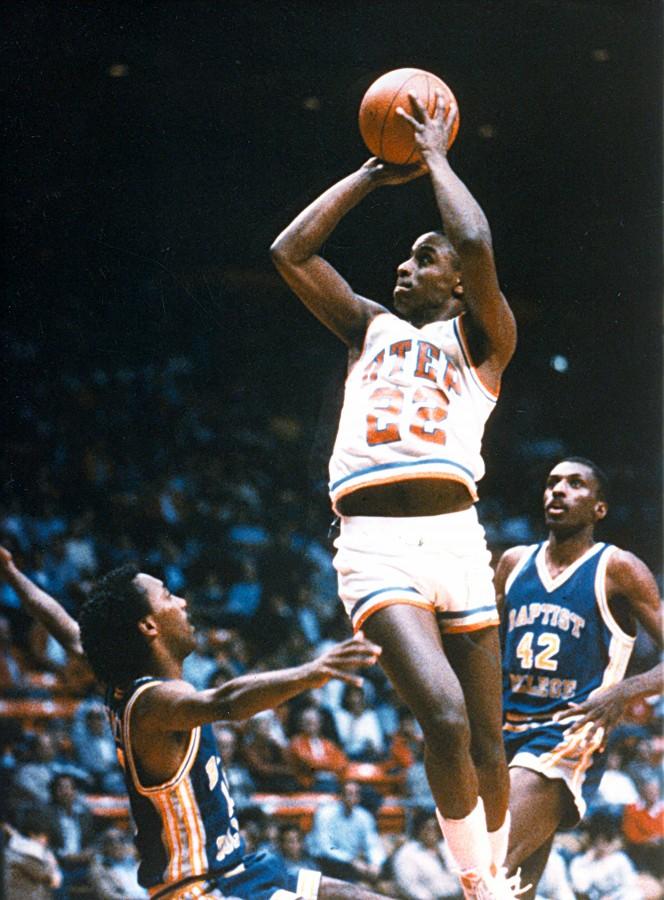 The first thing that comes to mind when UTEP men’s basketball is brought up is the historic 1966 NCAA basketball championship. Rightfully so, it deserves to as the late Hall of Fame head coach Don Haskins historically started five African-American players against an all-white Kentucky squad and won.

For years after the monumental win, coach Haskins always said that he just put the best team on the floor,  and his humility and reserve about his coaching decision is what makes the story even better. He changed the game of basketball by being the first head coach to play and recruit African-American players in the South.

Without him, players such as Michael Jordan, Kareem Abdul-Jabbar or Magic Johnson may not have ever come onto the basketball scene. The 1966 championship team deserves the recognition and credit they get, but 30 years ago, there was an era of UTEP basketball that brought added excitement, passion and winning.

Basketball in the ‘80s was the golden era of UTEP men’s basketball and it is often forgotten. Future NBA stars, sold-out games and undefeated home seasons were the norm 30 years ago. The glory days can only be seen through 30-second video clips, black-and-white pictures and nostalgic stories from people who were lucky enough to witness it.

El Paso Time’s reporter Bill Knight has been covering the team since 1979—he has seen the high and lows of UTEP basketball. Through the years, he developed a close relationship with Haskins and players of the past. Knight sees the 1980s as a forgotten era.

“They probably don’t get the respect they deserve, maybe from the hardcore fans, but those were some good teams—always in contention, always going to the NCAA tournament and winning the conference,” Knight said. “The place (Don Haskins Center) was always packed, so it was a special era. There was just a buzz in the air on game day and leading up to the game.”

Excluding the Miners’ championship in the 1960s, the ‘80s were the Miners’ most successful decade. Coach Haskins made UTEP what today would be called a mid-major powerhouse. The Miners in the ‘80s had a higher winning percentage and won more games than any other decade.

Their six tournament appearances in the ‘80s is the highest of any decade and the Miners posted three undefeated home seasons in 1983-84, 1985-86 and 1988-89. The atmosphere can only be described by the fans of the past.

“I have seen a lot of basketball games and UTEP was definitely back then one of the loudest venues,” said UTEP alumni Wayne Shaw. “You wouldn’t be able to hear a whistle some times because it was so loud. No one wanted to play them back home then. It was a tough crowd and tough place to win.”

Nearly 15 years after the 1966 banner-raising season, the Miners struggled for the next decade and a half. But when a young Louisiana Tech graduate named Tim Floyd joined Don Haskins’ coaching staff in 1978, things started to change very quickly.

“Coach Haskins had some losing seasons in the late ‘70s,” said Knight. “Tim Floyd is the one who really got the recruiting going. He just recruited like a mad man, he was always on the road back then and he got some really good players.”

Many people look back and remember coach Haskins and his star players as the driving force of the ‘80s, but Tim Floyd was the man in the back rolling up his sleeves and getting to work. Former players, sports writers and fans of the decade hold Floyd in high regard.

Former assistant coach Rus Bradburd, who coached along-side Haskins and Floyd from 1983-91, attributes his success as a coach and a recruiter to Tim Floyd.

“I had virtually no relationship with Coach H. The first year that was spent learning from Tim, about the game, recruiting, how to handle myself, speak, dress, and not piss off Coach Haskins.  He was an important bridge, Tim, in my development,” said Bradburd.

Thanks to Floyd and Bradburd, an influx of young, energetic, athletic players arrived on campus and made their name known very quickly. The ‘80s had more 1,000-point scorers than any other decade. All-Conference guards such, as Luster Goodwin, Hernell “Jeep” Jackson, Prince Stewart and Tim Hardaway were a few Miners who graced the city of El Paso.

They joined past legends such as Charlie Brown, Bobby Joe Hill, Willie Worsley, Nolan Richardson and Nate Archibald in the pantheon of all-time great UTEP guards.

“In the early ‘80s, back in my era, it was almost like the starting point for rebuilding UTEP basketball,” said Goodwin. “We were able to do that because of the great recruiting from Tim Floyd and great coaching by coach Haskins.”

Goodwin played for the Miners from 1981-85, and he is a member of the 1,000-point club and led the Miners to three NCAA tournament appearances.

The Miners regained the success that they had from the mid 1960s, which led to the domination of the Western Athletic Conference (WAC). The Miners won five-straight WAC regular season titles from 1983-87. In that five-year span, the Miners posted a 61-19 record in conference play, and they only lost one conference home game during their five-year reign. Beating the Miners at home in a conference game was virtually impossible.

The return to championship seasons was also attributed to the Miners’ physical brand of basketball. Set in motion by coach Haskins, the Miners were one of the most physical programs of the decade.

“They had a great defense, but they were really physical and they had strong guys who played hard,” said Knight. “I remember when Georgetown came here in the ‘80s and UTEP beat them here. The funniest thing was that Georgetown wouldn’t play here without Big East officials, and that was perfect for UTEP because those officials would let you play. It turned out UTEP was more physical than Georgetown was—they were just hard-nosed.”

“Practically everyone on the team were from different places,” said Campbell. “Nobody was actually from El Paso, so we all had to connect with each other because we were all we got. We were a family.”

Players coming together and bonding can also be attributed to Coach Haskins, who made the team dynamic possible— letting players know early on that playing basketball for him
was no vacation.

“My freshman year, he (Haskins) came to us in a meeting room and told us to forget about Thanksgiving, Christmas and forgetting about seeing you parents,” said Campbell. “He said, I’m your Santa Claus during these holiday seasons.”

Coach Haskins dry humor was only part of a small picture that he painted.

“Coach not only taught us how to be athletes on the court but adults off the court, and that I will always praise. Any coach can teach the game of basketball, but can they teach the game of life,” said Campbell. “There were all these kids coming from different areas and different cultures, but we all had that ultimate respect from Haskins.”

Although Don Haskins had great help on the bench, when it was time to talk there was only one voice echoing through the gym.

“There was never any mistake about who was running the team, said former assistant coach Rus Bradburd. “I see these huge staffs now that most teams have and I have to laugh–for what? I think it actually hurts and confuses a team. They need to hear one voice, and  Haskins’ voice was very clear.”

Now decades removed from the greatest era of UTEP basketball, head coach Floyd is trying to rejuvenate the program. Floyd’s homecoming back in 2010 brought excitement, fond memories and winning expectations. Now going into his fifth year at UTEP, coach Floyd’s voice, attitude and coaching style is reminiscent of coach Haskins.

While most are optimistic that Floyd can bring the glory days back to El Paso, the 1980s are an era that will never be truly duplicated. Better players and better teams might come through UTEP, but the ‘80s were the foundation that made UTEP a great basketball school and not a flash in the pan of 1966.