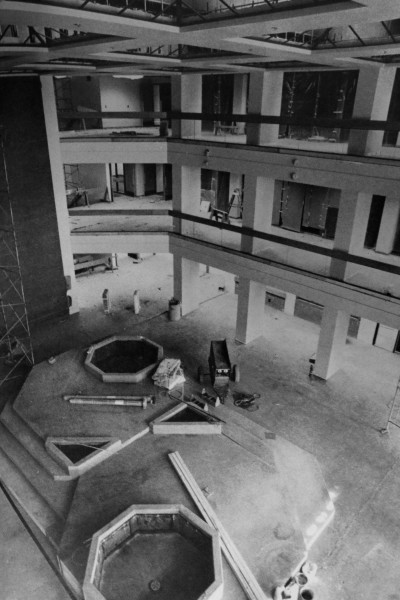 The current UTEP library under construction in 1980

It is a little-known fact that the first library burned down with the rest of the Main building back on a Sunday in October of 1916.

The fire occurred just before dawn and it still remains a mystery as to what caused it. All that remained of the original campus was
the dormitories.

Paul J. Vierra, managing editor of the UTEP Encyclopedia, is very knowledgeable when it comes to the history of the university.

“The original collection of books was lost,” Vierra said. “That collection was on loan from William Battle Phillips, who was the head of the Bureau of Economic Geology at the University of Texas. He was also the mentor of our first dean at the university, which was Steven Howard Worrell.”

The school recovered and moved to its current location in 1917. The new Main Building, now called Old Main, housed the library in the back right section of the building.

The first librarian of the school was a woman named Ruth Monro Augur. She was a painter by trade and actually designed the school’s first logo and seal which was used until 1949 when the school became Texas Western College.

In years past, the library never had a permanent residence until 1938, and the library finally had a place
to call its own.

Claudia Rivers is in charge of Special Collections at the UTEP Library and has access to the history of UTEP’s library.

“It went from a very small collection to this library now, where we have over one million volumes,” Rivers said.

She has been at UTEP
for 22 years.

“I understand that at one point, they had volunteers help move all the books in the library across campus to what is now the Geology building, a few of them disappeared,”
Rivers said.

It appeared that volunteers had made off with the library’s already  small collection of books. Finally, a man named Baxter Polk was given the job as librarian in 1936 and had that title until 1973.

The library was finally in a building all to itself. There was even an annex library building located where the Academic Advising Center is currently located.

When Polk arrived, the library had a collection of 13,000-14,000 volumes. According to Polk, the size of the school at the time needed a collection of about 100,000 books. Anne Holder was a student in the ‘50s and also worked in the library as Polk’s assistant. She eventually became the documents librarian. She is now retired and lives in El Paso.

“He was a remarkable man,” Holder said. “I learned so much under Baxter (Polk), even though I was not training to become a librarian. I think that the library was a fascinating place because Baxter Polk was a fascinating human being and he encouraged an intellectual light.”

In 1980, Haskell M. Monroe was the last president of the university before current president, Diana Natalicio, took over.

During Monroe’s time, he felt a new library was necessary for the  school. Under Monroe’s leadership, the UTEP Library was built into the library that students use today. The UTEP Library grew throughout its history, but it was not until the late ‘80s to early ‘90s when schools along the Mexican border started to receive better funding.

“In the 1980s, the landscape and maintenance budget of UT Austin was greater than the combined budgets of all the universities along the border. There was a great funding disparity,” Vierra said.

The final conclusion of this case gave way for the Texas Legislature to provide millions of dollars to support higher education to nine institutions along the border, with UTEP being one of them.

Today, the library is a place where students can study, lounge and relax with friends while enjoying a cup of coffee in the lobby area.